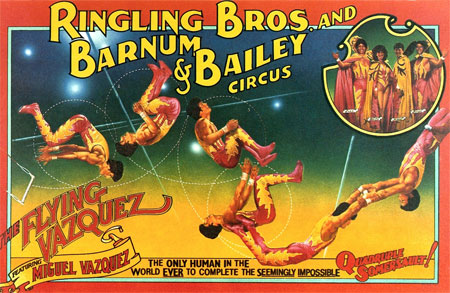 Miguel Vazquez, one of the most celebrated trapeze performers of the 20th Century, will be teaching at Circus Juventas on Friday, October 23. Vazquez will participate in the St. Paul-based acrobatics school’s flying classes starting at 6:45 PM, following a 5-6 PM meet-and-greet under the school’s big top. Dan Butler, the Executive Director of Circus Juventas, described this as “A once in a life time experience for our young people to meet and have an opportunity to work with the most accomplished flyer ever!” 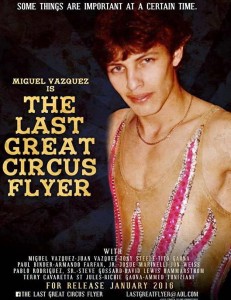 During a 1982 Ringling Bros. performance, Vazquez was the first trapeze performer to accomplish (and the only performer to ever “master”) the once considered “impossible” quadruple somersault. The quadruple somersault – four turns in the air to a catcher – was described as “The greatest feat in all of circus history.” For 15 years, Miguel and his family, “The Flying Vazquez,” headlined the premiere circuses in the U.S. and Europe. In 1994, at the apex of his career, Miguel unexpectedly stopped flying – never to perform the quadruple somersault again.

Screenings of “The Flying Vazquez” will be held at the Showplace Icon Theatre in St. Louis Park in conjunction with the Twin Cities Film Festival. Show times are 10:30 AM on Friday, Oct. 23 and Sunday, Oct. 25 at 7 PM. Tickets may be purchased online at http://twincitiesfilmfest.org/films/the-last-great-circus-flyer/