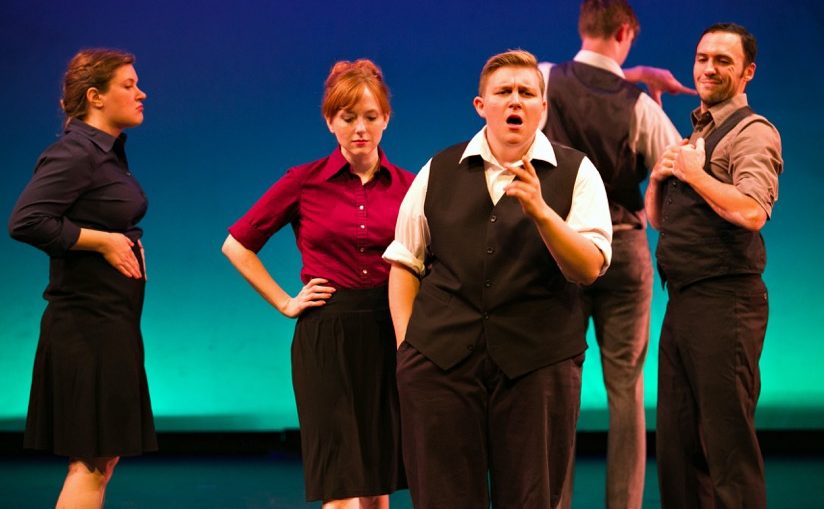 The Transatlantic Love Affair Ensemble. Photo by Lauren B Photography.

Transatlantic Love Affair’s latest production, 105 Proof or, the Killing of Mack “the Silencer” Klein, opened last week at Illusion Theater. Diogo Lopes directs this expanded version of the original 2015 Minnesota Fringe Festival production. The work delves into the world of gangster films that were popular in in the 1930s through the 1950s and made the careers of actors such as James Cagney and Edgar G. Robinson.

Many of the early gangsters emerged in the Prohibition Era where the sale of illegal alcohol made gangster activity acceptable since their customers were respectable farmers, working class laborers and the middle class. Some of the gangsters who emerged during this time period included Al Capone and John Dillinger and they often became folk heroes. (Audiences’ romance with Dillinger continues; LookBack Productions’ Good Friday with Dillinger at the 2016 Minnesota Fringe Festival sold out two performances; 105 Proof itself was the fifth-best-selling MN Fringe show in 2015.)  Despite the fact that these gangsters were ruthless killers, they often represented the American success story of going from rags to riches through their criminal activity. The urban legend of such killers grew even more in the Depression Era with the emergence of killers such as Machine Gun Kelly and the even more infamous Bonnie and Clyde.

TLA uses the rags-to-riches approaches to show how the son of a grocery store owner in the rural Midwest started selling local bootleg alcohol. He boosts his prestige and income when he moved up to being a thug with a major gang lead by Mack “the Silencer” Klein. Of course the lure of easy money, easy women and a glamorous lifestyle lead to family heartache but, with a story twist, it also leads to a happy, but not virtuous, ending for the central character.

Eric Marinus plays the narrator and older version of the central character Jonathan. Marinus, with a matter of fact style, tells us the tale of murder and heartbreak. But rather than having remorse at the end, Marinus’ character appears delighted that he survived and prospered due to his gangster ways. Nick Wolf plays the younger version of Jonathan with charm and easily portrays a youth who is seduced by the gangster lifestyle.

In typical TLA style, the cast plays multiple roles alternating between victims, gangsters, family, and the police. TLA veterans Allison Witham, Derek Lee Miller, and Heather Bunch all do a great job of shifting through several personas, sometimes even within the same scene.

Except for the twist at the end, the story is rather clichéd and it continues the tradition of romanticizing gangsters in our culture. Another disappointment was TLA’s trademark movement work. There were some innovative movements, such as opening a car door, entry into the grocery store, and the killings – but these movements were done with tiresome repetition and, more importantly, the movement work does not dominate as it has in previous TLA plays like Red Resurrected, Ash Land, and Ballad of the Pale Fisherman.

If you’ve never seen a TLA play, their unique work makes seeing 105 Proof worthwhile. Similarly, those who are into gangster movies should enjoy the story. This is not TLA’s best work, however, and I recommend that TLA fans wait for a more daring production.

105 Proof or, the Killing of Mack “the Silencer” Klein plays through November 20 at the Illusion Theater in Minneapolis.