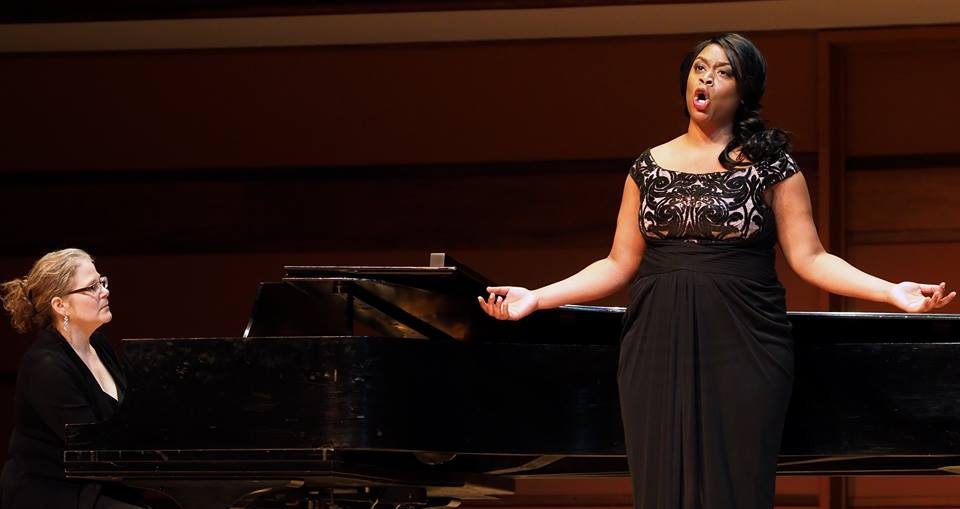 Soprano Whitney Morrison singing at the District auditions on Saturday.

One of the best chances to hear opera’s up-and-coming stars was yesterday, when the Metropolitan Opera National Council held its Minnesota District auditions at Bethel University. Some 32 singers between the ages of 20 and 30 competed in the auditions, traveling from as far away as Alaska. As a free competition open to the public, it was a great way to hear many singers who will go on to leading roles at opera companies around the country.

The finalists compete with other district winners in the Upper Midwest Region auditions, which take place from 12-4 PM today in Bethel’s Great Hall, and are also free and open to the public. The judges were Melissa Wegner (Associate Director of the Met National Council Auditions), Maestro Thomas Muraco, and Brian Speck (Director of the Houston Grand Opera Studio).

The Metropolitan Opera National Council auditions culminate in a national final round, from which the winner traditionally receives a contract with the Metropolitan Opera. This year’s district auditions will include a master class (also free and open to the public) on Monday at the University of Minnesota’s Ultan Recital Hall from 9:30 am-12:00 pm, led by Maestro Thomas Muraco of the Manhattan School of Music.