You are here
Home > Arts > REVIEW: Steamy Words in <em>Anna in the Tropics</em> (Jungle Theater) 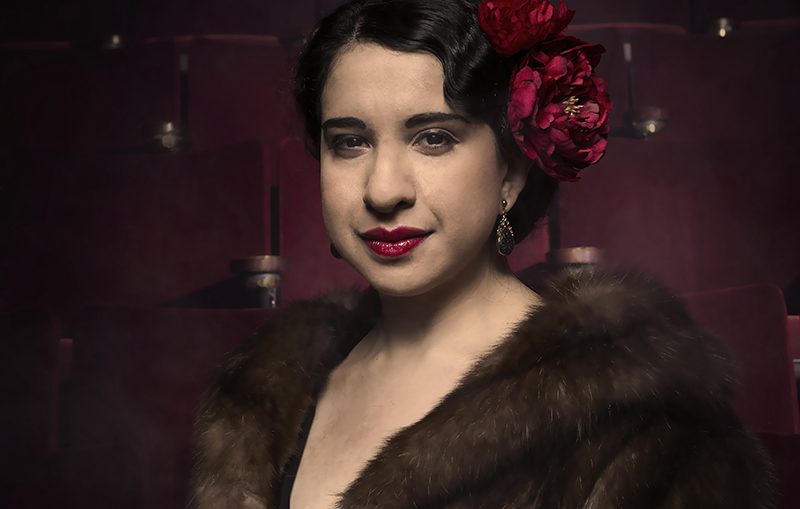 Cristina Florencia Castro as Marela in Anna in the Tropics. Photo by William Clark.

The world of Tolstoy collides with the world of Cuban-American cigar workers in Jungle Theater’s current production of Anna in the Tropics.  Playwright Nilo Cruz’s Pulitzer Prize-winning drama transports its audience to nearly a century ago in Tampa, Florida.  Director Larissa Kokernot provides an engrossing version of this story about life in a cigar rolling factory.

The play focuses on life in a small cigar-rolling factory.  The owner of the cigar factory is Santiago (Al Clemente Saks), who has a bad habit of getting drunk and losing at gambling.  He has frequently borrowed money from his half-brother Cheche (Dario Tangelson) and then has to give Cheche shares of his factory to pay him back.  Santiago has a loving wife Ofelia (Adlyn Carreras), who often needs to assert to Cheche that he does not make the decisions about the factory.

Until the 1930s, work in Cuban cigar factories was by workers and not machines.  Before there were machines, these factories had a long history of using “lectors” in the workplace.  Lectors read books and poetry to the workers to provide an entertaining diversion from the monotony of the work.  When the play begins, Santiago’s factory has recently lost a long-term lector who literally died on the job.  The replacement lector did not stay long because he became involved with Cheche’s wife and they ran off together.  Because of his unfortunate experience with the last lector, Cheche opposes hiring a new lector.

Ofelia, on her own, hires a lector from Cuba who was highly recommended.  She and her two daughters, Conchita (Nora Montanez) and Marela (Cristina Florencia Castro), anxiously await the arrival of the new lector Juan Julian (Juan Rivera Lebron), who they hope will read them great love stories.  When Julian arrives, he clearly meets their expectations with his good looks, romantic manner, and his passion for literature.

Julian chooses to read Leo Tolstoy’s tragedy Anna Karenina to the workers.  He reads with such romantic fervor that Ofelia and her daughters swoon daily over his readings; even Santiago loves to listen to Julian.  The soap opera storylines of the book start to play out with the workers:  Conchita, whose husband Palamo (Rich Remedios) is unfaithful, begins an affair with Julian.  Marela develops a huge crush on Julian.  Cheche, very bitter about his wife leaving him, lusts after Marela.  As with a Tolstoy novel, tragedy is inevitable – although the ultimate victim at the end is a shocker.

The play has great pacing as scenes flow seamlessly together.  Montanez, Castro, Carreras, and LeBron bring a romantic energy to their roles that helps enthuse the audience for the lector’s readings.  Labron plays the role of a lector as a cross between a matinee idol and a professor of literature.  Sak does a marvelous job of transforming Santiago from a pathetic, alcoholic loser to a proud, triumphant leader.  Tangleson plays the bitter Cheche with a depth of pain and ambition that the audience can empathize with even if one cringes, as Marela does, at the thought of Cheche.

The staging of the play is disappointing.  The minimal set did not successfully create a factory atmosphere.  There was not a sense of a large number of employees listening to the lector besides the main characters.

Anna in the Tropics deals with corresponding themes that life imitates art and that that modernization leads to the loss of cherished traditions.  The result is that the audience is exposed to a slice of life that has passed.

Anna in the Tropics plays through March 12 at the Jungle Theater in Minneapolis, MN.