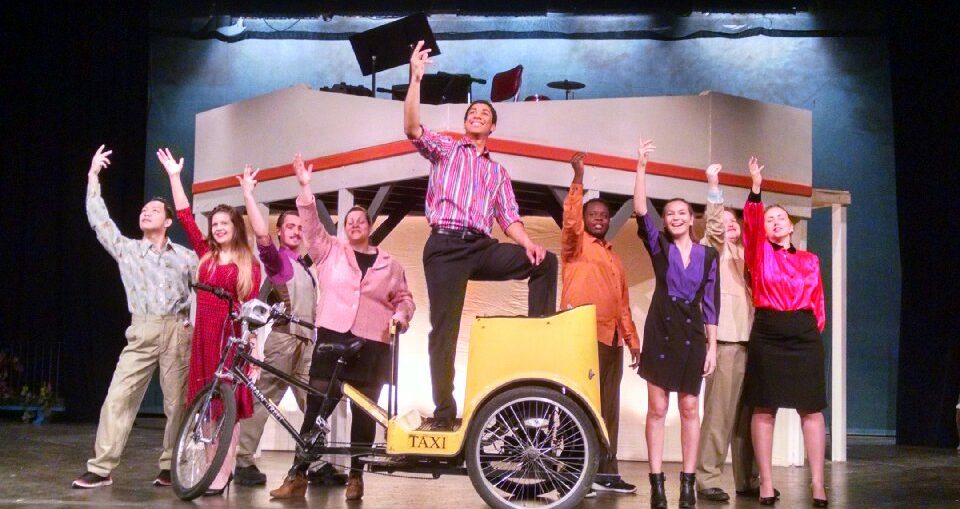 The cast of North Hennepin Community College Theatre’s production of Women on the Verge of a Nervous Breakdown. Photo by Mike Ricci.

Pedro Almodovar wrote and directed the Spanish Film Women on the Verge of a Nervous Breakdown (WVNB) in 1988. The film received critical acclaim, won the New York Film Critics Best Foreign Language Film, and was nominated in the same category for the Academy Awards. A musical version of the movie was brought to Broadway in 2010 with David Yazbek’s music and lyrics and Jeffrey Lane’s book.

Although the show was nominated for two Tony awards, including Best Original Score and Best Performance by a Featured Actress in a Musical, it was not a financial success and closed after a very short run. The Minnesota premiere of this musical opened this last weekend at North Hennepin Community College Theatre (NHCCT). Director Mike Ricci and a cast of highly talented college student actors successfully present this ambitious staging of WVNB.

The plot of the show is, to say the least, complicated. Pepa (Jenny Reierson-Naumann) opens the show waking up from a drug-induced sleep, only to find she has a “Dear Jane” message on her answering machine from her lover Ivan (John Naumann). Pepa is frantic to find Ivan to talk with him about her suspected pregnancy. She first runs to the studio where she and Ivan work as actors laying down Spanish dubs of American films. Ivan did his dubs without her and is nowhere to be found. Pepa frantically searches for him, checks phone messages, and leaves him messages for two days.

While Pepa is desperately trying to find Ivan, her model friend Candela (Zarah Nesser) is also frantically trying to connect with Pepa by phone. Candela has just spent a passionate three days with a young man who she later learned was a terrorist, and is understandably terrified the police will arrest her. Lucia (Kelli Massey) comes on the scene as Ivan’s former wife…after spending 19 years in an insane asylum after Ivan left her and her young son. Lucia’s son Carlos (Caid Goodwin) is grown and is engaged to marry Marisa (Kara Thielsen) and Marisa resents Lucia’s re-emergence in Carlos’ life. There is also Lucia’s attorney Paulina, who is also Ivan’s latest lover. Finally, there is the taxi driver (Matthew Hall) who opens, closes, and drives Pepa around during the show in an inventive Yellow Taxi bicycle. Ivan often appears in memories and voiceovers, then finally appears as himself near the end. These different characters find reasons to interact repeatedly and, in the end, the women form a bond in their final song.

Although all of the performers are students, many of these students are ready to take the professional stage at Minneapolis theatres. Under the musical direction of Ryan Bynum, outstanding singing is a hallmark of the production with exceptional voices from Reierson-Naumann, Naumann, Nesser, Massey, and Hall. Reierson-Naumann’s provides a world weary Pepa and is the glue that holds these different characters together. Nesser’s frantic movement and hilarious singing during the song “Model Behavior” is the highlight of the show.

Soren Olsen’s set design is an ingenious use of a town plaza which is converted to apartments and court rooms. In the center of the stage is a gazebo-type structure, with the musicians performing on the top level and the actors joining them on occasion.

WVNB provides a very unique and entertaining evening. NHCCT’s presentation of this musical is definitely worth checking out especially since it may be the only local production of this musical. As an instructor at North Hennepin Community College, I have been attending NHCCT’s final musical productions every season for the past four years and I have been amazed at the quality of the student performance. WVBD continues that tradition.

Due to an internal communication error, a 2015 file photo of an NHCCT was originally displayed with this review.

Women on the Verge of a Nervous Breakdown plays through April 15 at North Hennepin Community College Theatre in Brooklyn Park, MN.