Poet Sonia Sanchez was a unique voice in 1965-75 Black Arts Movement with her poetry ranging from Black Nationalism to her later work emphasizing family, relationships and self-empowerment. Her poetry is the center of a promising musical titled Girl Shakes Loose, which premiered last Thursday at Penumbra Theatre. Imani Uzuri composed the show’s music, Zakiyyah Alexander wrote the book, and both provided lyrics to complement Sanchez’s poetry. The show is directed by May Adrales, and is a collaboration that makes an impressive start for Sarah Bellamy’s tenure as the Artistic Director of Penumbra Theatre. 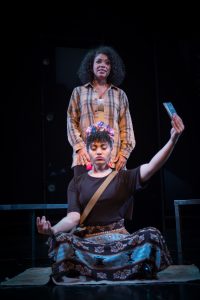 The musical centers on Girl (Alexis Sims), a character whose real name is never mentioned. The show features a chorus whose members take on various roles in the musical. It opens in New York City, where we learn about Girl in flashbacks: she holds a master’s degree, and had a successful start-up business in Oakland, California – only for it to go bust during the 2008 recession. Audiences never learn what exactly it is that Girl was successful at. They do, however, learn that Girl is bisexual and was in a serious relationship with Ella (Tatiana Williams). Girl abruptly left her life in California when her business failed and ran off to New York City, without a word to Ella.

The most significant drawback to the show is in an unnecessarily long first act. Girl repeatedly tells us how much she hates New York City. She is caught in a major depressive episode when she flops on a friend’s couch, gets a low-skill, low-paying job, and gets involved in a purely physical relationship with a man she picked up in a bar. Act 1 can definitely use some trimming, but it does contain certain gems. The best is the scene where Veronica (China Brickly), a New Age trust fund baby, sings the uproarious romp “Soymilk” as she interviews Girl for a roommate opening. Veronica has one of the best lines where she tells the consistently depressed Girl that she is giving off a “negative vibe.”

The audience is rescued from this New York downer when Girl’s grandmother passes away and she leaves her much-hated New York City for her hometown in Elberton, Georgia. Immediately after the intermission, the pacing picks up and the musical becomes exhilarating when Girl returns to her Georgia roots. She reconnects with Eddie (Korey Pullman), an “almost lover” that she grew up with. She visits with her Aunt Lucille (Jamecia Bennett) as well as comes out to her estranged mother (Thomasina Petrus), with whom she reconciles. Bennet and Petrus’s characters are both strong and determined women – in sharp contrast with the floundering Girl. Act 2 has some terrific songs, including “Stay,” “She Got a Right,” “Shake Loose my Skin,” and the hilarious “Airplane/Traveling.” Act 3 takes place in San Francisco, California; although it has good scenes, it is also anti-climactic.

As Girl, Sims is in every scene, and keeps the audience interested – even when Girl’s complaining becomes rather tiresome. It’s an exhausting job, but Sims is great at it. Brickey’s Veronica creates the show’s most comical character and is deserving of her own musical. Pullman’s Eddie is a charming and genuinely likable character.   As Ella, Williams’s fierce level of commitment understandably gives Girl some reason to pause. Bennett and Petrus, as Girl’s aunt and mother, are both very powerful in their performances leaving the audience wishing their characters had more stage time. John Jamison, Lamar Jefferson, and Valencia Proctor round out the talented chorus.

Karen Charles’s inventive choreography is terrific, keeping the chorus front and center and moving the musical along at a brisk pace. She makes great use of Vicki Smith’s scenic design which includes a revolving stage giving the appearance of constant movement. Smith’s detailed set of a Georgia home works well with Kathy Maxwell’s projection design and contrasts with the images of New York City and San Francisco.

This musical is a significant work, even though some parts have the feeling of a work still in progress. Sanchez’s poetry comes alive with Uzuri’s music and brings forth her themes of empowerment to a new generation.

Girl Shakes Loose plays through May 14, 2017 at Penumbra Theatre in St. Paul, MN.