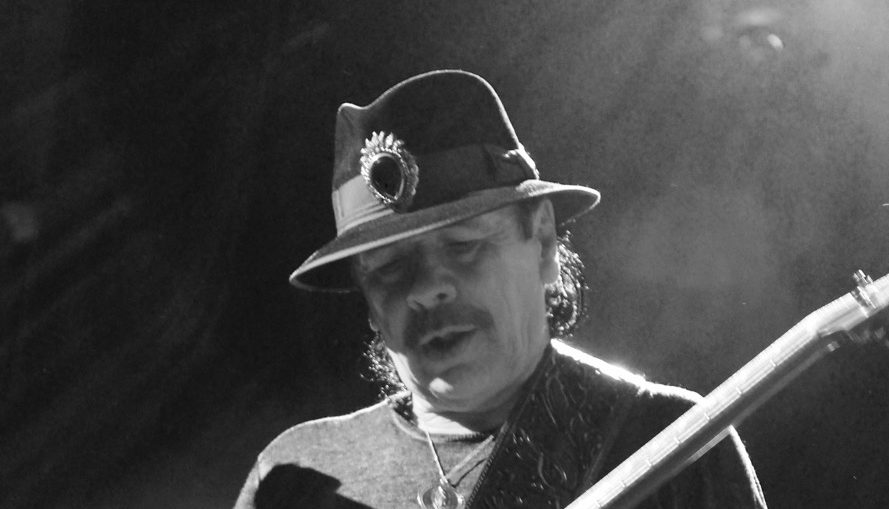 In the last few years, Baby Boomers in the Twin Cities have had the chance to revisit many of the Rock and Pop gods of their youth, with the Rolling Stones, The Who, and Paul McCartney all coming through the area.  Carlos Santana, who appeared Thursday at the Mystic Amphitheater, more than warrants inclusion in this pantheon. He turns 70 years’ old next week, but you would not know it from the high energy and intricate guitar work on stage.

With his group Santana, Carlos has sold 100 million records, received 10 Grammy Awards, been inducted into the Rock and Roll Hall of Fame, and been recognized at the Kennedy Center Honors in 2013. From the band’s first appearance at Woodstock, Santana has offered a distinctive, Latin-inflected rock sound. Classic hits like “Black Magic Woman,” “Evil Ways,” and “Oye Como Va,” continue in regular rotation on Classic Rock stations four decades on, but the group has also had hits more recently, with songs like “Smooth”, “Maria Maria”, “Why Don’t You & I”, and “Into the Night”.

Carlos worked a crowded stage that included three guitars, a keyboard, and a trombone alongside the percussion of three excellent drummers. One of the drummers,Cindy Blackman Santana (Carlos Santana’s wife) also took a turn as vocalist in “I Remember”.  That song, along with the evening’s opening song, “Are You Ready,” comes from Power of Peace, the group’s forthcoming album made with the Isley Brothers.

Power of Peace is due out July 28; a few of the songs are already available from iTunes and other sources.  Over the years, Santana has worked with a wide range of singers on stage and in the recording studio. The vocalists for this concert were very good, even if they could not quite match up with the iconic voices that fans know from past Santana recordings (e.g., Rob Thomas, Tina Turner, Jennifer Lopez, and Michelle Branch).

The concert started promptly at 8 PM and the band played briskly from song to song, covering many of the old classics including (“Oye Como Va”, “Black Magic Woman”, and “Evil Ways”) and some of the hits from the early 2000s (“Smooth” and “Maria Maria”), though skipping over some of the more Top 40 hits of the intervening decades (e.g., “Winning,” “No One to Depend On,” “All I Ever Wanted,” and “Open Invitation”).  The concert ended with “Smooth” – Santana’s biggest hit – and “Love, Peace, Happiness” – this last from the new album, and reflecting the message of the band throughout the concert, and the basic feeling of the audience throughout.

Brian Bix
Brian H. Bix (Guest Contributor) grew up in the Twin Cities and is currently a Professor of Law and Philosophy at the University of Minnesota. He has published numerous articles in a wide range of venues.