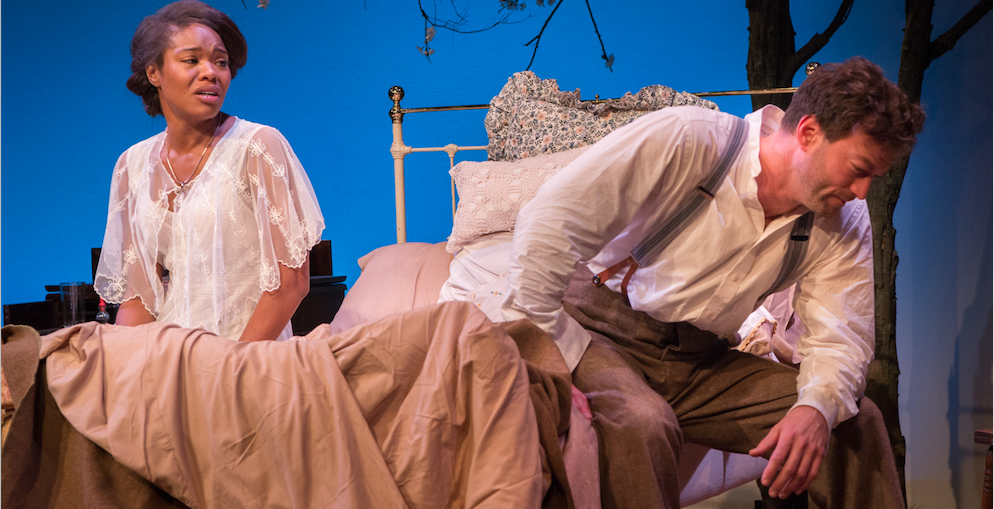 The course of love does not run smooth for Julia (Dame-Jasmine Hughes) and Herman (Peter Christian Hansen) in Penumbra Theatre’s production of Wedding Band: A Love/Hate Story in Black And White. Photo by Allen Weeks.

Penumbra Theatre opens its 41st season with an explosive production of Wedding Band: A Love/Hate Story in Black and White. Alice Childress first wrote the play during the turbulent Civil Rights era. During the mid-1970s, the ABC television network licensed up the play and broadcast a teleplay adaption by Childress with Ruby Dee and J.D. Cannon in the lead roles. Lou Bellamy’s direction aptly brings out the comedy and warmth of the play, while also shocking the audience with the characters’ underlying racial hatreds.

Childress’ play centers on the final year of a 10-year illicit romance between Julia (Dame-Jasmine Hughes), an African-American seamstress, and Herman (Peter Christian Hansen), a white baker. These are two lonely individuals who have found some love and solace with each other. The time period is 1918, the final year of World War I and there is a life-threatening influenza epidemic. The place is Charleston, North Carolina where such interracial relationships are against the law preventing the lovers from marrying or even being open about their love.

Julia’s character is similar in several ways to Wiletta, the lead character in Childress’ play Trouble in Mind, which was produced at the Guthrie in 2016. She is an African-American woman who has been tolerating racial indignities and second class status to survive until one day she reaches her limit and risks her livelihood to speak her mind. In Wedding Band, however, Julia not only speaks her mind, she also shouts her anger and screams profanities to both her lover and to his family members. Standing up for herself and her race may cost her a lot – maybe even her freedom – but it serves as her liberation from society’s racial mores that have kept her in the shadows, often estranged from her own race and living a ghost of an existence. Once she breaks through, there is no going back.

Hughes is well cast in the difficult role of Julia. Initially, Hughes plays Julia as a soft-spoken woman who tries to be a friend to everyone and avoid trouble. When her Herman becomes ill, Hughes’ portrayal convincingly hardens from Julia’s initial mild manner to a woman full of rage. The cause of her outrage? The fact that more people are concerned that a white man may die in her bed rather than with the fact that her Herman is dying.

Julia is also hurt by the racial hatred expressed by Herman’s mother – more so since Julia herself has come to love the family already through conversations with Herman over the years. Hughes captures well the final straw moment for Julia: the double-whammy that Herman’s father was a member of the Klu Klux Klan and Herman himself participated in Klan activities when he was a child.

Hansen’s Herman is a less-developed character, perhaps because he’s near death for half of the production. Some of the strongest impressions are his love for Julia, how he would be indescribably lonely without her, and how disgusted he is with the fact he can’t bring himself to break free from his life and take Julie to a place where he could give her his name and protection.

There are also strong performances from the supporting cast. Ivory Doublette is a delight and provides much of the comic relief as Julia’s neighbor Mattie. Darius Dotch as Nelson plays a typically carefree young soldier who vexes his mother Lula (Austene Van). Lula  is forced to play the role of protector, since Nelson is reckless about the dangers he faces as an African-American man who wears a “white man’s” military uniform. George Keller as the landlord plays a role similar to her earlier role in the Ten Thousand Things production of Intimate Apparel. Keller’s Fanny provides humor, but Keller also shows how this very proper African-American woman is lonely and lusts for Nelson’s body and attention.

On Herman’s side of the family, Jen Maren plays his sister Annabelle; Maren portrays someone who also feels trapped. She wants to move to Brooklyn to marry her sailor boyfriend, but can only do so if Herman marries a white woman who will take care of their mother. Maren shows that Annabelle is limited by a racist upbringing, but there are hints that she does not really embrace it the way her mother does.

Laura Esping, as Herman’s mother, plays with great passion the least likeable character in the show. Esping’s portrayal shows a woman who is so angered by her son’s relationship with Julia that she cannot contain her vile feelings for Julia even as she needs her assistance to have Herman return home under cover of night to avoid a scandal. Her disgust with Herman for engaging in this interracial relationship is aimed at Julia. The angry racist exchange between Maren and Hughes is so raw and realistic that is uncomfortable to watch.

Vicki Smith’s set design captures the backyard with a set of turn-of-the-century row houses, with Julia’s bedroom also onstage. It is an efficient design, allowing the play to proceed from scene to scene without delays and scene changes, but the tight stage makes for limited movements by the characters in the yard. Propmaster Amy Reddy’s attention to detail reinforces the 1918 time period.

Love does not always conquer all, especially racism. Wedding Band shows that interracial relationships do not always have a happy ending. This play will force you to push through your discomfort to confront the personal and ugly side of racism. Consequently, this play is chillingly applicable to the “White Rage” era of today, just as when it was created during the Civil Rights era.