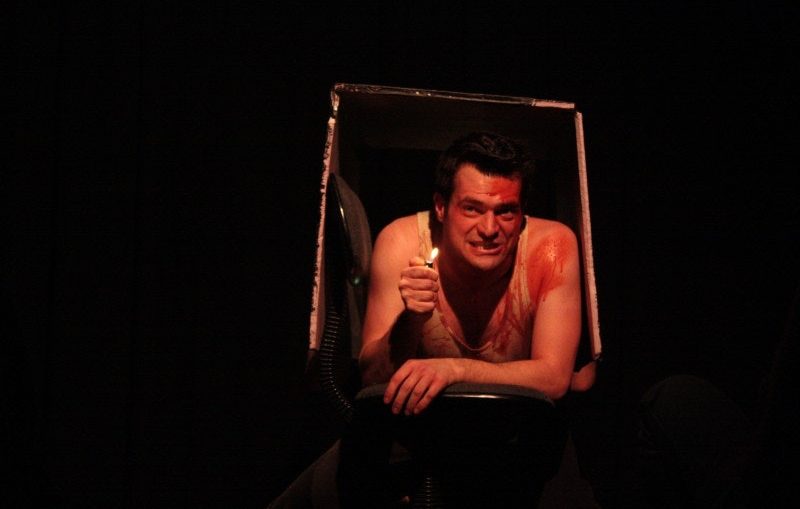 Is Die Hard a Christmas movie? Believe it or not, this question has acquired significant attention on the Internet, with even Canada’s Prime Minister Justin Trudeau weighing in on the question. Less in dispute is whether or not Die Hard is a good basis for a Christmas theatre parody. A Very Die Hard Christmas, now playing at Bryant-Lake Bowl Theater, answers that question with a resounding “yes”.

As the marketing copy reads, A Very Die Hard Christmas comes “from the creative minds of Mainly Me Productions and Dana’s Boys…a holiday treat with all the trimmings: singing, dancing, and bloodshed!” Add swearing and more movie references than you can shake a stick at, and that’s about right. This is lowbrow comedy with a touch of absurdity and a lot of meta commentary (not that these are bad things). Does it help to have seen the movie? Yes, it does, although a quick trip through Watch Mojo’s clips will cover your bases. A few humorous “cameos” involving other holiday staples also make their appearances, so don’t fret about prepping.

This is the show’s fifth incarnation; judging by the number of shows sold out so far, it appears to be ensconced as the bloodiest holiday theatrical in town. John McClane (Josh Carson)’s shirt takes a real beating as the situation steadily deteriorates at Nakatomi Plaza, as do a few Christmas songs subjected to the pop culture blender. (Just don’t try any drinking games involving the word “Schnell”, or you’ll be in detox by halfway through the show.) Laughs come a mile a minute.