You are here
Home > Arts > REVIEW: <em>A Crack in the Sky</em> and the Quiver of Truth (History Theatre) 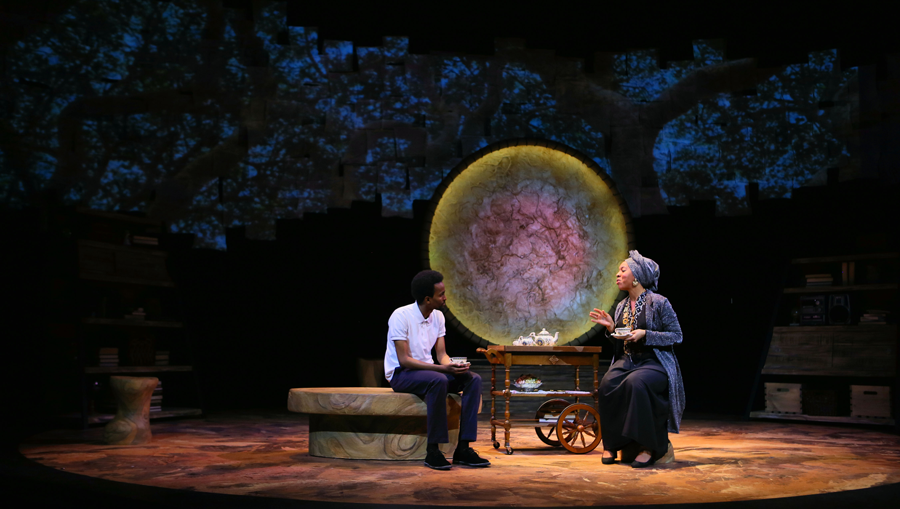 Not all paths lead where you expect. That’s one of the takeaways from Ahmed Ismail Yusuf’s striking new play A Crack in the Sky, which is now playing at the History Theatre. Yusuf, the author of A Thorn in the Sole and Somalis in Minnesota, shows a distinctive writing voice and engaging narrative style, both of which often brim with humor.

Humor? In the middle of one of the great refugee crises of the 1990s as his family gets caught up in the Somali Civil War? Yes, as a matter of fact. Yusuf’s autobiographical tale has more than a few twists and turns, but it’s quite charming.

Charming? You should see Owl and Camel, who are Yusuf’s imaginary friends (yes, you read that right) tagging along for the ride. Owl is played by Mikell Sapp; Camel, by Tracey Maloney. Sapp and Maloney’s portrayals of these sort-of spirit animal characters are vibrant and engaging, both for children and adults – and sell the illusion despite minimal costuming.

The journey that Ahmed (Yusuf plays himself) may be difficult, but the world is beautiful to see; as with innumerable productions when he was at the Jungle Theater, Joel Sass has designed a splendid set that is lovingly lit by Michael Wangen. A distinctive piece of theatre by a voice whose work I look forward to seeing more of.

—
A Crack in the Sky plays through March 4 at the History Theatre in St. Paul, MN.