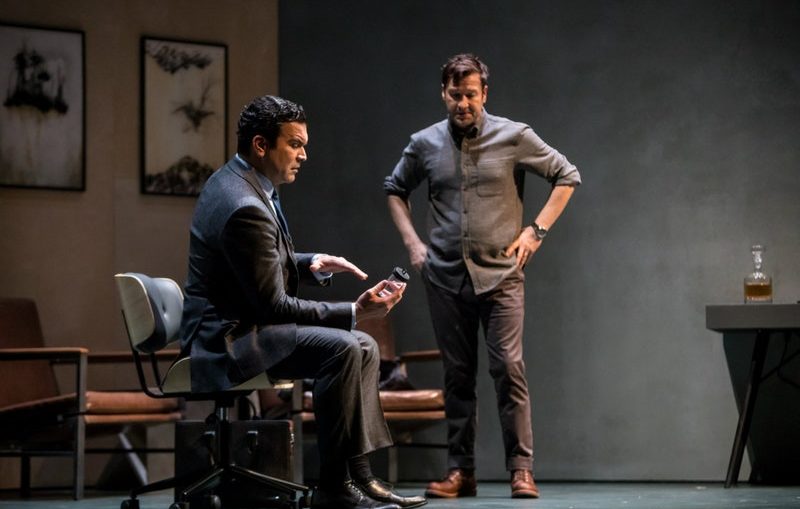 The Stockmann brothers Peter (Ricardo Chavira) and Tom (Billy Carter) in the Guthrie Theater’s production of An Enemy of the People. Photo by Dan Norman.

It says something about Norwegian playwright Henrik Ibsen (1828-1906)’s place in the theatrical canon that his works are now being freely reinterpreted, reconceived, and given sequels. Such is the case with the Guthrie Theater’s current production of An Enemy of the People, which makes radical cuts to the script to make an almost Hollywood-sized abbreviated remake.

Enemy of the People premiered in 1882, the same year as Ibsen’s Master Builder – another of his plays to have recently been reconceived here in the Twin Cities, with an entire character made flesh (albeit with much of a textual grounding). The aim of many of these cuts and the slick, rotating set appears to be to craft a drama commenting on the present U.S. political climate. This isn’t the psychological sort of drama as Ibsen’s better-known A Doll’s House (which came out three years earlier) or Hedda Gabler (which came out eight years later). It’s, well, a thinly veiled political allegory.

I am not familiar enough with the various translations of the play to know how much is happy accident and how much has deliberately been shaped by Brad Birch and director Lyndsey Turner, but some of the lines seem cherry-picked for director Joseph Haj’s mission to amp up the political commentary in recent seasons. When you hear lines like “Your facts are not the only facts,” it’s impossible to not see the intended parallel. So, too, the central theme of public poisoning recalls Flint, Michigan and current debates about what ingredients and additives are safe in the U.S. food supply. Happenstance or deliberately in-your-face, does it matter?

My major criticism of this free-wheeling adaptation (it’s hard to see at as anything else, given the play’s shrinkage by half and contemporary setting) is that it’s a little too neat. While I appreciate not being overly troubled or conflicted on date night, the narrative could stand a few more twists and turns before Tom (an excellent Billy Carter) puts all the pieces together and things start coming down. Leaving you wanting a little isn’t the worst of endings, but I do hope that someone gives this play the (mostly) uncut treatment so that I can see what the non-diet Ibsen is like.

An Enemy of the People plays through June 3 at the Guthrie Theater in Minneapolis, MN.