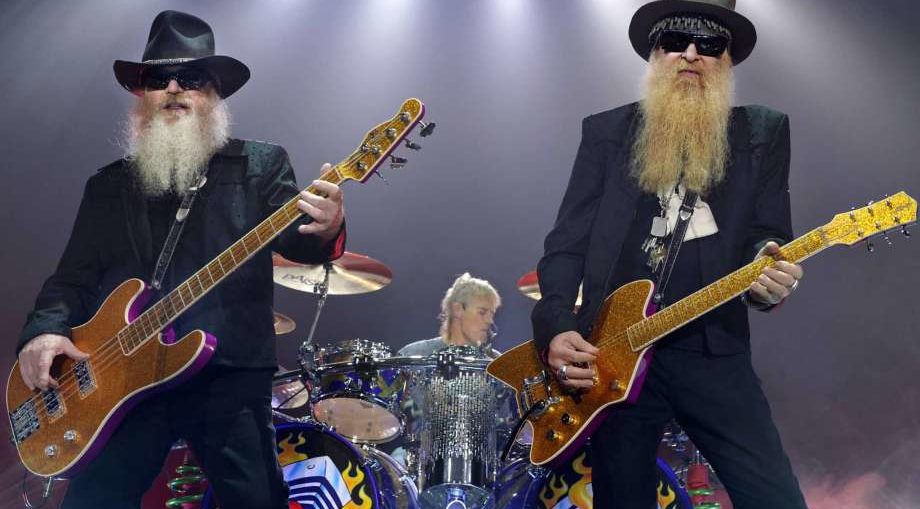 A promotional photo of ZZ Top sporting their trademark beards.

For a few years at the end of the 1960s and the beginning of the 1970s, Creedence Clearwater Revival (CCR), was the most popular rock band in the United States. With John Fogerty as lead singer and primary songwriter, CCR was a band of young Californians who mixed classic rock with songs about the Bayou. After the band broke up, Fogerty went on to a solo career with periods of touring, records, and hits separated by long periods away from the spotlight – as well as a series of well-documented conflicts with former CCR bandmates.

ZZ Top’s domination of the record charts came over a decade after CCR left the scene. This trio – Billy Gibbons, Dusty Hill, and Frank Beard – had massive hits fueled by brilliant videos that were in constant rotation on MTV. The group is well known for their iconic look with two long beards (ironically, it is the drummer, whose name is Beard, who does not have one), and has stayed together playing Texas blues and rock for almost 50 years.

In a very hot night at a packed Treasure Island Amphitheater, John Fogerty went first, backed by three guitarists – including his son Shane Fogerty – a trio of horns players from USC, a talented keyboardist, and the well-known drummer, Kenny Aronoff. (Aronoff is best known for his work with John Mellencamp, and appears on Rolling Stone’s list of the Top 100 drummers of all time.)

In the middle of Fogerty’s set, he was joined by ZZ Top’s Billy Gibbons for two songs, one a new composition the two of them have out, “Holy Grail”.

The other Gibbons/Fogerty duo was for the CCR standard, “Green River”.  Fogerty also brought to the stage one more relatively new work, his song with Brad Paisley on the mistreatment of war veterans, “Love and War”.

Mostly, though, Fogerty did the hits. Some were from CCR, such as “Proud Mary,” “Fortunate Son,” “Have You Ever Seen the Rain”, “Up Around the Bend”, and “Who’ll Stop the Rain” (this last played on the same guitar and using the same amp he had used at Woodstock). Some were from his solo career, such as “Centerfield” (playing a guitar that looked like a baseball bat), “The Old Man Down the Road”, and “Rock and Roll Girls”. Towards the end of his set, Fogerty did an homage to New Orleans music and culture, with his version of the classic, “Jambalaya”, the song, “My Toot Toot”, and a stirring cover of the Gary U.S. Bonds song, “New Orleans”. During the last, some of the musicians went into the crowd in Mardi Gras costumes, throwing beads to the crowd.

Compared to Fogerty’s rock and roll show, ZZ Top was fairly business-like. There were no musicians on stage other than the trio: Beard quietly in the background, setting a decisive beat; Hill stage right on his Fender bass; and Gibbons to Hill’s left playing his inimitable blues-inflected guitar. The two frontmen were their distinctive jackets, hats, sunglasses, shined shoes and still-impressive beards. There was not much movement on stage, and little choreography beyond the two guitarists moving their instruments in synch; the band often went from song to song with little or no chatter in between, beyond Gibbons’ question, “Are we having a good time now?!” However, the music and virtuoso guitar work had the audience on their feet throughout the performance.

The group displayed its usual two vocal registers. Gibbons growled his way through “La Grange”, “I’m Bad, I’m Nationwide”, Tennessee Ernie Ford’s “Sixteen Tons”, and the group’s most recent hit, the 2012 song “I Gotsta Get Paid” (a remake of an 1989 rap hit, “25 Lighters”). Hill offered smoother vocals for the old MTV hits: “Legs”, “Tush”, “Got Me Under Pressure”, and the inevitable “Sharp Dressed Man”.

It was a brilliant night of music, leaving nothing to be desired – except perhaps for a break in the weather, or just a cool breeze.

Brian Bix
Brian H. Bix (Guest Contributor) grew up in the Twin Cities and is currently a Professor of Law and Philosophy at the University of Minnesota. He has published numerous articles in a wide range of venues.