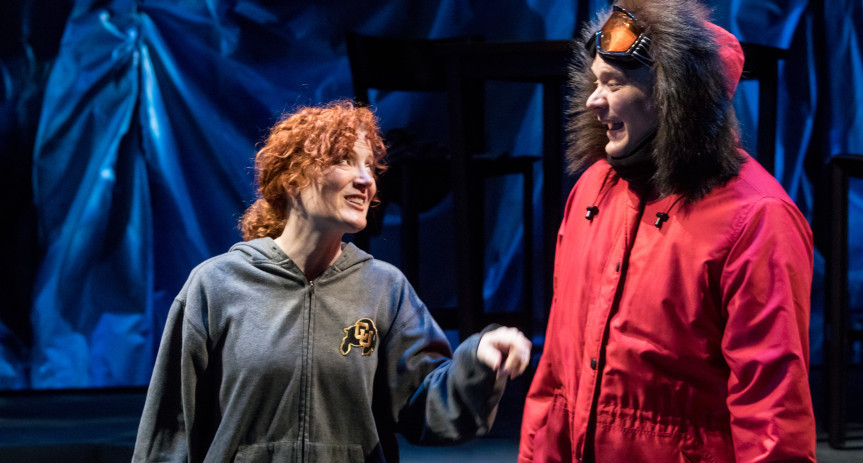 In its best moments, Two Degrees reminds you of some of the more lurid scandal episodes in The West Wing. In its less strong moments, the script meanders with suggestive plot threads that don’t pan out.

Tira Palmquist’s script for Two Degrees generated some buzz even before the play formally premiered, with a favorable reception at the Colorado New Play Summit in 2016. At its premiere last year, Palmquist was lauded for tackling climate change onstage. This year, some post-Paris Agreement exhaustion aside, some of that novelty has worn off. There are a lot of very interesting threads in Two Degrees, but the way they’re coarsely woven makes it less than the sum of its parts.

The present production is part of the Guthrie’s Level 9 series, in this case co-produced with PRIME Productions and directed by Shelli Place. Norah Long stars as Emma, a climatologist who ends up testifying before Congress. Compared to a recent bout of Senate testimony, it seems surprisingly mild now. As with its pre-election novelty, Two Degrees suffers not from an ebb in topicality so much as a popular culture exhaustion, now that the drum of its prime plot mover (global warming, in case you didn’t pick up on the title) has been beaten more times than the toms in a drum solo.

If the script doesn’t knit or sit entirely well, the characters are nevertheless vividly sketched and portrayed. Long’s engaging performance makes you want to get to know this character more: she’s smart, sassy, stubborn, and more as she plays off the rest of the cast. Her dead father, one of several played by Joel Liestman, simply doesn’t seem germane. Jennifer Whitlock’s U.S. Senator, however, is kind of like Minnesota’s current senior Senator: more, please!

Two Degrees is an imperfect play, but at the very accessible $9 price you can forgive a few rough edges to see these women in action.

Two Degrees plays through October 21 at the Guthrie Theater in Minneapolis.