A dinner with family might make you feel clammily, but a concert a week makes you feel pretty chic.

Aphorisms and strained rhymes notwithstanding, Thanksgiving marks the formal start of the holiday season. If you’re fully vaccinated (and especially if you’re boosted), this also means that you have a plethora of live entertainment options available for all the times that you want to get away from large family gatherings (or, you know, see a live show for the novelty of it). Here are some weekly concert picks from Thanksgiving to New Year’s:

Dosed up on holiday hotdish and hankering for some more Americana? Head over to the Ordway Center for the Performing Arts for the St. Paul Chamber Orchestra’s weekend concerts featuring a 1-hour program of new and classic Americana. Start with some oboe music by Samuel Barber, explore the blues violin with music by Coleridge-Taylor Perkinson, delve into the blues with composer Valerie Coleman, and  finish with Aaron Copland’s classic Appalachian Spring and the whole orchestra. You’re guaranteed to be humming the tunes at the end of the concert.

Do you have to wait until December 2 to catch Christmas of Swing: The Andrews Sisters’ USO Show, a holiday jukebox-stuffed show set during Christmas 1944? No, indeed – the show has already opened and plays through December 19. However, if you believe that December is the only fitting part of the calendar for Christmas songs, your first chance will be the 2nd of the month.

This updated version of the History Theatre’s seasonal classic has been expanded to tell a more diverse set of stories from the war, including those of Women Airforce Service Pilots (WASP), a Tuskegee Airman from Minneapolis, a Japanese American medic, an Ojibwe Code Talker, and a Mexican American Medal of Honor winner. 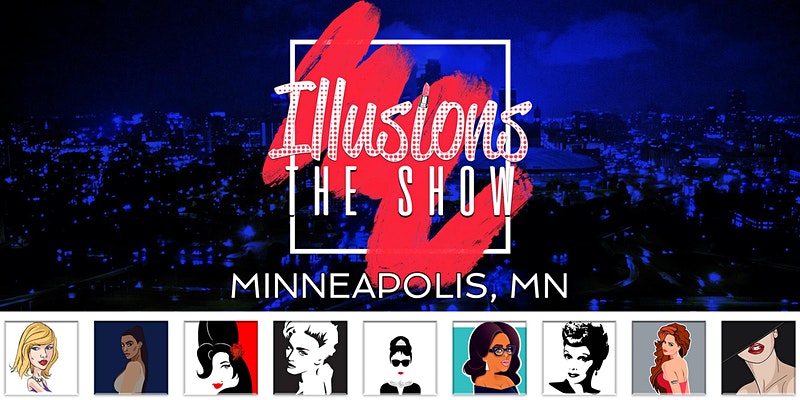 A promotional image for Illusions, a celebrity-impersonating holiday drag show.

Feeling cooped up or, dare I say it, transgressive after Thanksgiving weekend? Head on down to 612-698 County Rd 35 in Minneapolis for a holiday drag show featuring more celebrity impersonations than you can shake a stick at.

Perhaps your tastes run more to clean-cut suits and angelic men’s voices raised in a choir. In that case, it would be hard to beat the vocal ensemble Cantus, whose tour of the greater Twin Cities metro area stops this day at Westminster Presbyterian in Minneapolis for a brunch-time concert featuring classic carols and a few new songs exploring hallowed Christmas stories.

The powerhouse singer-songwriter duo of Emily Dussault and Leslie Vincent takes over the mainstage at Crooners Supper Club for a holiday concert. Also featuring Ted Godbout on keyboard, Ben Ehrlich on drums, Matt McIntyre on bass, and Mike Wolter on guitar.

Another show that you don’t have to wait to catch until the last minute (it actually opens on November 30), but what’re American holidays and Hallmark movies without putting a few things off? The musical, merry, menopausal members of the Looney Lutherans return for a comedy holiday musical show featuring an odor like no other: HOLD THE LUTEFISK, It’s Beginning to Smell a Lot Like Christmas.

Not responsible for any lutefisk-related appetite loss.

One thing that you cannot do is buy a ticket to A Very Die Hard Christmas at Bryant-Lake Bowl. That holiday movie parody show, the product of Josh Carson’s comedic genius, sold out its entire run well before opening. Either find someone with an extra +1 or ask Santa for advance tickets next year.