You are here
Home > Arts > PREVIEW: High Stakes in The Highwaymen (History Theatre) 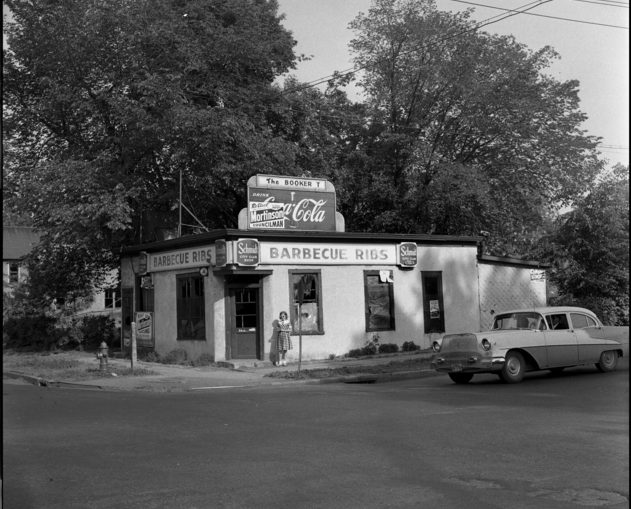 The Booker T. Café (named after Booker T. Washington) in Rondo in 1960, one of many African-American businesses and community gathering spaces rolled over by I-94 construction. Photo courtesy of the Minnesota Historical Society.

Tonight, Josh Wilder’s new play The Highwaymen premieres at the History Theatre in St. Paul. This historical drama examines the circumstances related to the building of I-94 in St. Paul’s Rondo neighborhood – an urban and transportation-planning decision that has gone down in urban planning infamy. The construction of I-94 (mostly starting in 1956) demolished much of a thriving middle-class African-American neighborhood and shattered the connections of much of what was left.

If this seems like a piece of ancient history, think again. To find a piece about I-94 and pain, just open yesterday’s Star Tribune and read about the impending Lowry Tunnel work. As the Star Tribune’s Tim Harlow put it, “It’s going to be bad. Very, very bad.” This was much the impression of Rondo’s community leaders when postwar urban planners decided in 1947 that their neighborhood was up for urban renewal, whether they liked (or needed it) or not. As MN Department of Transportation Commissioner Charlie Zell said in 2016, MNDoT would “never build that kind of atrocity today.”

One of the then-undervalued impacts of highway construction is that it often bisects communities from businesses, churches, and other services. If it is dangerous or inconvenient to pass a highway (most of which have far more underpasses and bridge crossing now than when they were first built), a business or church that is seemingly close to its patrons or members can find itself permanently stunted or forced to close. Residential areas cut off from their school district acquire a different character, especially if extended busing is required to reach the post-highway schools. These lingering community wounds and dysfunctions continue today, as recognized by the Knight Foundation’s granting $99,500 in 2016 to help advocate for a new bridge to reconnect the remaining (and separated) halves of Rondo.

The narrative of The Highwaymen doesn’t follow the classic bandits of English lore, but rather focuses on the planners who routed the highway through Rondo and those who opposed them. Playwright Josh Wilder described the play’s focus saying, “The lens is switched around…it examines the men behind the closed doors that impacted Rondo forever and the community leaders of Rondo who did their very best to save it.” The residents might have preferred simply to be robbed, rather than being evicted from their homes and forced to rebuild their lives in distant, segregated neighborhoods, with long-running consequences for their work, education, and community lives.

The Highwaymen opens tonight at the History Theatre in St. Paul, MN and plays through Feb. 26.