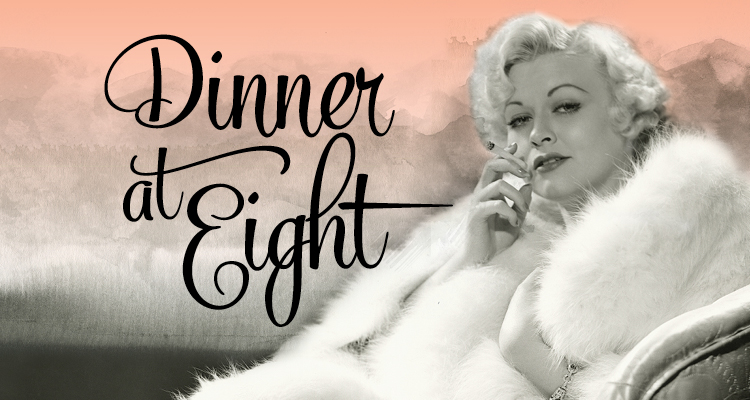 It took two and a half years for Edna Ferber to convince George S. Kaufman to cowrite the play Dinner at Eight (1932) with her. Ferber was already one of the best-selling writers in the United States, with a Pulitzer Prize-winning novel (1924’s So Big) to her credit. Nor was she unfamiliar to theatre audiences – her novel Show Boat had been adapted into the hit musical Show Boat (1926), which had already upended expectations for Broadway musicals and cemented the genre as a bonafide art form. Nor was she new to Kaufman – the pair had already collaborated twice, on Minick (1924) and Stage Door (1926).

Part of Kaufman’s reticence was the inherit complexity of crafting a full-length comedy about a dinner party, with a large cast to be introduced in media res. When Ferber first proposed what would become Dinner at Eight, Kaufman said, “It’s too difficult” and suggested that they work on a different plot idea. Eventually, they settled on one of those alternatives and coauthored 1932’s Royal Family – yes, that same Royal Family now playing at the Guthrie. After Royal Family had opened, however, Kaufman had finally run out of excuses.

“We’ve run all these other ideas into the ground and buried them,” Kaufman admitted to Ferber in March 1932. “I guess we’ll have to do something about Dinner at Eight. What about tomorrow morning at eleven?” The resulting script was written in just nine weeks, with the authors acting out all the characters in the large ensemble – to the consternation of their household help, who overheard full-voice arguments about parties and guests that never materialized. As Ferber quipped, “One of my maids and the man who cared for my lawn are still, I think, a little suspicious about our sanity.”

Fortunately, another sort of suspicion prevailed: The legendary Broadway producer Sam H. Harris deemed the show a sure-fire hit comedy, accepting it the day that he read it. Preparations began almost immediately and the show opened on Broadway that fall. Dinner at Eight was one of the biggest hits of the season, running for a then-happy 232 performances before the production was sent on the road. The play was adapted for film the following year, and has since been revived on Broadway twice.

As with many treatments of larger-than-life figures, Dinner at Eight‘s backstage and offstage history grew to match the onstage escapades. One of the more storied aspects was the casting process for Carlotta Vance (played by Brenda Harris in the upcoming opera) in the original Broadway play, with two national searches that each identified the actress Constance Collier. There was one major problem: Collier was engaged for performances in London, and required extensive (and expensive) international calling to recruit.

By the time producer Sam H. Harris finally engaged Collier with a verbal contract, it was the Saturday before rehearsals were due to start – and the actress was still in London. Harris took the extraordinary step of cancelling the first week of rehearsals to accommodate Collier’s transatlantic sea voyage back to New York.

Although Collier was reportedly quite pleasant to work with, as a veteran actress and fashion icon she attracted a not inconsiderable amount of media attention to the show. Like the acting clan depicted in Royal Family, she was just as much a fashion icon as an actress; her massive wardrobe was frequently covered in society journals, and reportedly required a small staff to maintain. She was also accompanied by a Pekingese dog named Mussolini – on which the New York Times reported, “As yet there have been no protests from the Italian Embassy.” One of Kaufman’s longtime objections to writing Dinner at Eight – that they wouldn’t be able to get an actress with the instant presence of a must-see dinner guest – evaporated with Collier’s addition to the cast.

From Spoken Drama to Sung

Compared to that three-year sojourn, Minnesota Opera’s adaptation of Dinner at Eight – opening tomorrow at the Ordway Center for the Performing Arts – is relatively speedy in coming to stage. This new opera by composer William Bolcom and librettist Mark Campbell was first announced on June 12, 2014, as the final gem (for now) in the company’s New Works Initiative, and comes to the stage a good three months under three years later.

When announcing the commission, MN Opera Artistic Director Dale Johnson said, “It is tremendously gratifying to commission a comic opera, particularly by an American legend like William Bolcom.” Bolcom is a celebrated composer of songs and instrumental music, as well as one of the most important writers of American opera; his Pulitzer Prize-winning A View from the Bridge (1999) has entered the modern opera canon.

The librettist for Dinner at Eight, Mark Campbell, is one of the most prolific librettists in American opera. He is also is well-known to local audiences for his work on Silent Night (2011), The Manchurian Candidate (2015), and The Shining (2015), the first of which received the Pulitzer Prize for Music. He also previously collaborated with Bolcom on the chamber opera Lucrezia (2008).

Developing a new opera involves considerable work and multiple revisions large and small. The new operas in MN Opera’s New Works Initiative go through a 3-workshop development process to refine the script and score: two with the principal singers and piano accompaniment, the last with a full orchestra. Select patrons and board members were invited to attend the final workshop in November 2016. As a full orchestra accompanied the cast, William Bolcom and his wife Joan Morris (a mezzo-soprano for whom Bolcom has written many songs) sat in the front row, orchestral scores open, taking notes. The audience verdict? Favorable, with substantial applause.

After a winter interval for revisions and refinements, rehearsals for Dinner at Eight picked up in earnest in February, following the close of Diana’s Garden. The short rehearsal window was facilitated by the earlier workshop process, although several of the company’s Resident Artists had to gain rehearsal releases to compete in the Metropolitan Opera National Council’s Minnesota and Upper Midwest District auditions. (Mary Evelyn Hangley, who plays Miss Copeland in Dinner at Eight, received a Third Place award for the Upper Midwest District.)

As audiences to Royal Family can attest, Kaufman and Ferber’s plays tend to be on the longer side. Much of the opera libretto unfolds in short, speech-like quips and exchanges, allowing for musical expansion at selects points; a number of subplots (a particular favorite of Kaufman’s) have also been excised. That leaves quite a lot of room for the opera to unfold; as Campbell noted, it “features marital infidelity, financial ruin, social opportunism, a fatal disease, and a suicide.” Suicide? Well, this is a Great Depression-era piece, albeit humorous overall. As Campbell added, “Naturally, it’s a comedy.” If you can’t laugh at your troubles, you can laugh at others’.

—
Dinner at Eight opens at the Ordway Center for the Performing Arts in St. Paul, MN on March 11 and plays through March 19.