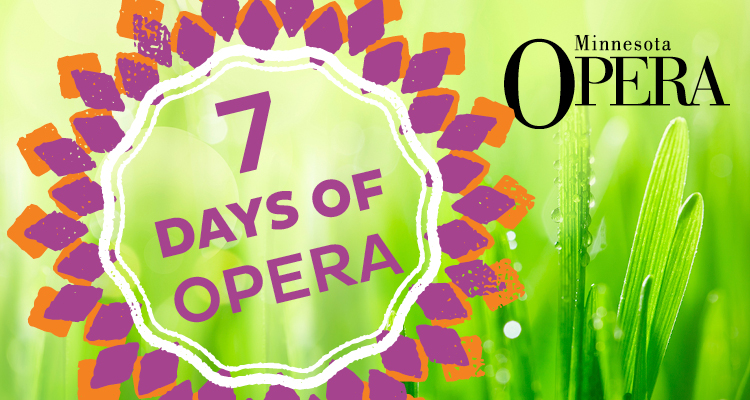 Popup events are all the range now, and Minnesota Opera has decided to get into the game in a big way. Starting on September 19, MNOpera is sending its musicians out for free daily performances around town in the build-up to its season opener. The promotion, succinctly styled 7 Days of Opera, hits just one of the usual suspects and touches six less expected places. The seven venues are:

The seven performances will feature soprano Bergen Baker, bass-baritone Rodolfo Nieto, and pianist Jenya Trubnikava. Baker was previously featured in the company’s Carmen (as Mercédès), La fanciulla del West (Wowkle), and Magic Flute (Second Flute), and will appear as the Second Wood Sprite in its forthcoming production of Rusalka. Nieto has been featured in half a dozen MNOpera productions, most recently including La fanciulla del West (Castro), and appears in Metamorphosis Opera‘s upcoming production of Milhaud’s Médée. Trubnikava herself is the principal pianist for the St. Cloud Symphony Orchestra and has played for Mill City Summer Opera and the St. John’s Boys’ Choir.

Although the performances are officially free, visitors to the Mill City Farmers’ Market and Whole Foods may find their wallets significantly lighter. Leaving the Minnesota Zoo with a non-stuffed animal in your bag is discouraged.