You are here
Home > Arts > PREVIEW: Attack of the Boobies – The Return of the Halloween Burlesque 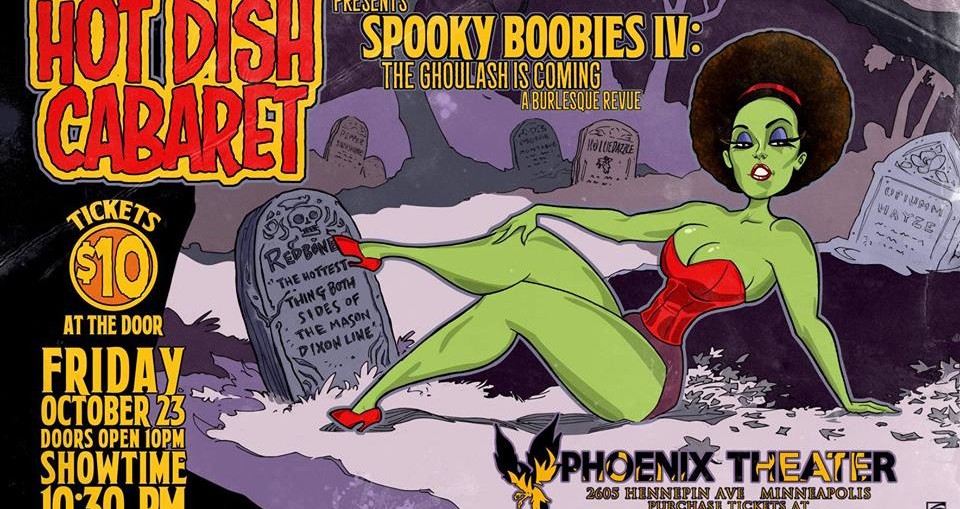 The Halloween-themed show opening at the Phoenix Theater on Friday, October 23 has a lot of trick and treating – for a certain interpretation of those words involving boobies. No, it’s not the latest round of inappropriately sexy Halloween costumes or a swarm of drunken coeds. This performance is a Hot Dish Cabaret feature entitled Spooky Boobies IV: The Ghoulash is Coming.

What is Hot Dish Cabaret? This isn’t your grandmother’s tater tot casserole and Cabernet Sauvignon, unless your grandmother had a thing for stripping, delightful malapropisms, and salacious puns. This is neo-burlesque, an expressive form that takes the act of striptease and turns it into performance art and comedy. HDC mixes up more traditional burlesque routines with belly dancing, fire, mime, and more. The Twin Cities Arts Reader sat down with HDC for an old-fashioned Q&A:

In an age where naked flesh is very easy to see via the Internet, what is burlesque’s special appeal?

Burlesque is a unique art form that celebrates (slightly naughty) movement, dance, and bodies in a way that isn’t captured from just regular old nudity (though we think that’s fun too!) With acts that tell stories, make you laugh, blush, and shout for more — seeing burlesque live is believing that it’s pretty special. These carefully curated performances create an experience that just doesn’t compare to sitting at home looking a naked people, or even going out to a strip club. Burlesque is about the sizzle- the anticipation, not just the steak.

You’ve had the original Spooky Boobies, Revenge of the Ghoulish Breasts, Attack of the Murderous Melons, and now, in a change of pace, The Goulash. What happened to the naming scheme?

Hot Dish generally has their show after Halloween (called Halloween Hangover), so we felt with our show now being before Halloween, it necessitated a different sort of theme. T&T was thrilled that the Hot Dish team was willing to reincarnate the Spooky Boobies show, and gave full permission to name the show as they saw fit. With regards to the name, we wanted to put a special Hot Dish twist on the next installment. What celebrates both hot dish and spooky? Goulash!

This installment of Hot Dish Cabaret is moving out of its longtime home at Ground Zero Nightclub to the Phoenix Theater. Is this a temporary move or a more permanent one?

Hot Dish has permanently departed Ground Zero, as the venue wished to run events in house. We are thrilled to do this show at the Phoenix Theater, but at this moment only have plans to do this show. If the show feels like a good fit, then you may see more of Hot Dish at the Phoenix. We’ll post all updates about our permanent home and future shows on our Facebook page as soon as we have information.

This particular show is priced at a relative premium ($10 vs $8) compared to previous Hot Dish Cabaret installments. Are there any special features that the audience can look forward to?

General admission tickets for this show are available online for 8 dollars ahead of time, and at the door for 10 dollars. There are also specially reserved VIP seats at the front of the theater, with a table, for $13 ahead of time or $15 at the door. We try to keep prices as low as possible, while still being able to cover the cost of the production (paying performers, tech crew, rentals, etc.) We work carefully to keep our prices similar to our past shows. This show will feature a few very special guests, including a competitor from this year’s Burlesque Hall of Fame, Redbone!

What happened with the original “with a costume” discount?

Since the first Spooky Boobies, the shows have celebrated those with costumes in a variety of ways such as contests, discounts, fashion shows at intermission, etc. We are still cooking up something special for this year’s show, so stay tuned!