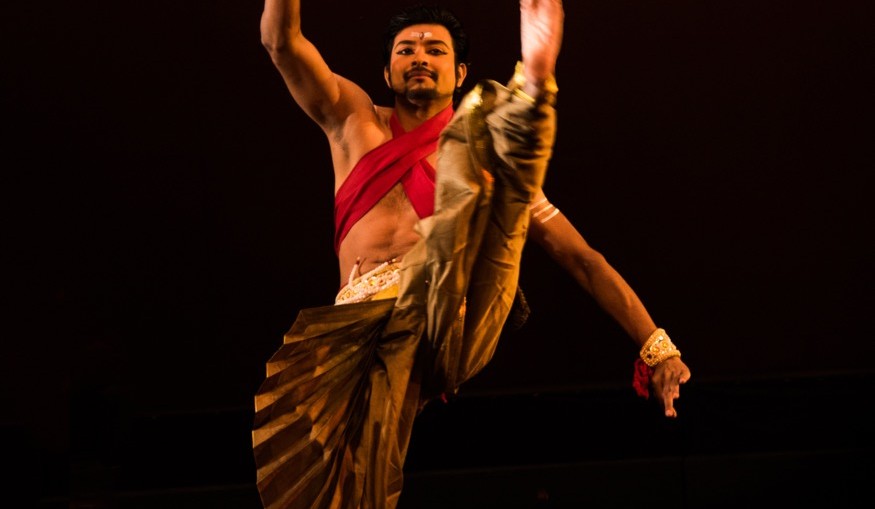 Today is a good news/bad news day. The good news is that Katha Dance Theatre’s show Pourush – The Masculine is spectacular. The bad news is that if you haven’t see the show already at the O’Shaughnessy, you missed it. Now that the bad news is out of the way, let’s talk about what made this dance work so moving.

Dance from the Indian subcontinent has been in vogue these last several years in the Twin Cities, with several (Asian) Indian dance extravaganzas selling out at the Fringe Festival and a growing number of dance companies, classes, and events sprouting out all over. Many of these productions have been quite well done, with polished performances and eye-catching choreography. Then there is a performance like Pourush that catches breaths and entwines eyes, with interesting movements small and large wrapped in a web of music unlike much of what most of the audience has heard. Many performances have short moments that hold the audience’s attention firmly, but Pourush has long ones. Indian statuary has never looked so expressive as after seeing what this cast can convey with sinuous movements of arms and hands, and through the tension of a pose.

This brainchild of choreographers Rita Mustaphi and Maitreyee Pahari features two distinctive types of Indian dance: Chhau, a martial dance tradition rooted in northeast India, and Kathak, an Indian classical dance tradition rooted in north-central India. The dramatic concept of Pourush pits these in something of an opposition, with the Princess Chitrangada (played by Rupa Nair and Nivedtia Sahni) caught between embracing her warrior upbringing (Chhau) and ideals of passive femininity (represented here through Kathak). The story does not present a strong message as such, but serves adequately as a framework for the real exhibit: the dancing. This is where the performance truly shines, especially in the various combats (physical, emotional, and spiritual) between Chitrangada and the characters played by brothers Rakesh Sai Babu and Rajesh Sai Babu. The Rakesh and Rajesh, a pair of master Chhau dancers visiting from India for this performance, inject a level of virtuosity that elevates the whole performance.

Describing dance often descends into superlatives, but this performance is worthy of quite a few. The score by India-based composers Sharat Chandra Srivastava and Rajeev Chakraborty isn’t bad, either.