Steven Wendt (Blue Man) hails from Kansas City, MO. A graduate of the Walnut Hill School for the Arts in Natick, MA, and from CalArts in Valencia, CA, he arrived in town this week to perform in the Blue Man Group tour at the Orpheum Theatre. His past performance credits include Blue Man Group–Orlando, Ground to Cloud RedCat (Disney Hall Los Angeles), The Soltanoff/Findlay Project at The Center Theater Group in Los Angeles, and Growing Up Linda at the Edinburgh Fringe Festival. He has also performed as a puppeteer for Cartoon Network and Kids WB, and is a professional Hand Shadow Master. The Twin Cities Arts Reader‘s Basil Considine sat down with Steven to chat about Blue Man Group and his career as an actor-puppeteer. 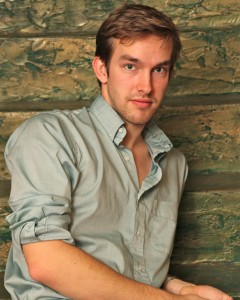 Where are you from originally?

I was born in Kansas City.

What brought you out to the East Coast to the Walnut Hill School for the Arts?

My dad was living out there in Boston; since I was involved in a lot in performance in Kansas City with my high school, we were looking for options out there specializing in the performing arts…

It was amazing. I was a little reluctant to leave my [previous] school because I was about to be the president of the choir, but when I went to Boston I saw a production of the musical Blood Brothers [at the Walnut Hill School for the Arts] and I was just blown away. I couldn’t believe it was [this good], like I was seeing something up at the Rep[ertory Theatre] in Kansas City. And it was [at] this high school! I said, “Okay, I’ll audition. If I get in, I’ll go.” So I ended up [attending and ultimately] being a fifth-year senior there, so that I could do a year of studio acting to prepare for auditions.

And then you moved to California, which is a polar opposite climate. Why did you select Cal Arts?

I went there because I was more interested in improvisation and I wasn’t turned on as much by conventional theater. It was really wonderful that I got into Blue Man Group, because it’s one of the only really successful non-conventional shows. One of the only ones that tours.

You usually get a lot of Broadway shows [touring] and this [Blue Man Group] is Off-Broadway in New York. It’s a really obscure show to be as popular as it is, and now that I’ve been been a part of it for 4 years I totally understand why it’s so successful. I still love musical theatre and it has a huge part in my heart, but we have no fourth wall in the Blue Man Group – it’s definitely different [than most other theatre].

Your bio states that you’re a professional hand shadow master.

I got into that at Cal Arts. Cal Arts is one of only two places in the country where you can get a master’s degree in puppetry. I wanted to be a part of the puppet cabaret that happened twice a year at Cal Arts; I wanted to be on the committee, and they said I had to perform…so I bought a book on hand shadows, quickly learned all those and got bored of them, and so I just started inventing my own.

I found out that I really had a knack for it. I began to be known as the Shadow Master, and after graduating I ended up actually doing a lot of puppeteering work around LA for the Cartoon Network and some Kids WB stuff, and I also had a reoccurring show at this wine bar with some jazz musicians from Cal Arts. I’d do hand shadows there once a month.

I lived in L.A. for two years. When I was in college at CalArts, I was submerged there – I didn’t even have a car, so I was pretty much stuck out in Valencia. Tim Burton went to school there and Edward Scissorhands is based on his experience living in Cal Arts, in this very new suburban California where every house is identical…

I was stuck pretty much up on that hill. Just researching and experiencing Cal Arts for what it is. It’s a clothing optional campus, too, so it’s kind of crazy.

This work’s better in some climates than others.

Yeah. I wanted to go to California to because of the weather, too, but they [Cal Arts] were also really responsive and professional [with admissions], more so than the other ones the schools that I applied to.

How many schools did you audition for?

I auditioned for a bunch: Carnegie Mellon, DePaul, Juilliard, Cal Arts, SUNY–Purchase. It was a toss-up between SUNY-Purchase and Cal Arts, but the SUNY-Purchase campus was just all mud [when I visited] and Cal Arts was full of palm trees. I also really liked the concept behind Cal Arts that it’s all the arts under one roof – which is what Walnut Hill was, as well. I’m glad I made that choice – I mean, I’m still paying for that choice, but it was worth it.

What was the arc that then took you to Orlando and Blue Man Group?

I was involved with this experimental theater project with a director who got a million dollars for an experimental theatre project in Los Angeles. One of the other performers was a former Blue Man, and I just loved the energy that he brought to the space…then I did this other show with a director doing an arts residency in California; I worked with her and met her husband, who’s the electrician at the Astor Place Theatre in New York where Blue Man Group performs. I just kept meeting all these Blue Man people and they were were all cool, so then I auditioned.

There were three days of callbacks and I got the job, but they said that I needed to take drum lessons. They set me up with a drum teacher in Los Angeles for two months…I thought, “You know, at the very least, here I am getting free drum lessons – this is great!” I worked my ass off, then they sent me out to New York. They put me up for two months to learn the show.

It’s kind of nerve-wracking because it’s a long audition process; they really look for actors who are team players and collaborate well. There’s no real star to the show. They’re looking for genuine people who are great performers, can work well with each other on stage, and can complete these very specific tasks – and also be flexible, not only physically flexible, but also flexible mentally….

Knowing that you could get cut at any time was a little nerve wracking and then, but I made it through the two months of training and then they offered me a year’s contract down in Orlando.

So you went from Los Angeles to Florida for your first year in Blue Man Group Orlando. What’s happened since?

For a short stint, Blue Man Group had a show on the Norwegian Epic; we had a contract with them, so I was able to go out there and do a smaller show on the ship. This was great because it was very similar to the original show at the Astor Place Theatre [in New York City]. I’ve been on tour [most of the time].

After I did the ship, I went around Europe and met a film director who’s friends with my friend’s sister; I was [then] able to take a month off and do an independent film in Brussels in February.

It’s great to be part of this community – Blue Man Group is a community of artists, so they’re very accommodating. It’s become kind of like being a part of the family.

The last incarnation of Blue Man Group involved tossing things into people’s mouth. On the cruise ship, the floor doesn’t stay level…how was that?

That was just another element of this wacky world we live in that the Blue Men had to adjust to. It actually made it more fun. It made the show a little bit more intense and unsteady and it was awesome. You’d have to jump to catch a marshmallow in your mouth and you’d be coming back down and the floor wouldn’t be there…you’d be in the air longer. It was crazy!

There was also a point where I was on the ship when one of the stabilizers out and only one was working…it tipped the ship almost a 45-degree angle. It was actually in the middle of one of those cirque performances. There was a guy balancing on one of those surfboard things with a cylinder and they stopped the show, but he was still up there, [thinking] “What happened?”

So where is home base for you now?

Home base is currently Orlando. I’ll be going back down there when I’m done…I’ve come to come to really enjoy it, although at first I was a little iffy [about living there]. When I started, I was like, “Please don’t send me to Orlando or the Vegas show,” but now it’s really grown on me and it’s a delight. We have so many international tourists there!

The year I moved to Orlando, there was a billboard that said, “Thank you, Orlando, for hosting 55 million tourists last year”… People are constantly coming and going out of there and it’s just a great way to expose people to this great show. The weather is [also] great, pretty much the opposite of Minneapolis and St. Paul.

That blue paint you wear must be really hot – have there been any air conditioning breakdowns?

There have…[but] I kind of like it when the paint a little bit warmer, because it goes on easier. It’s this thick, thick, thick oil greasepaint – some guys even one warm it up with the blowdryers.

Our show comes in on 6 semi trucks full of our stage and lights…we bring in the floor, the band lofts, the proscenium, all the lights…it’s a beautiful show, but it gets hot up there! Audience members ask if it’s sweat [that they see], but much of it is paint [splashing], which cools us off.

How long does it take to get out of makeup?

25 minutes – 30 if I have a shower. But we talk about the show every night with the stage manager. For most shows, after opening night, you’re done with notes, but with us it’s not. We’re very open and we have to talk about what works and does not because so much of the show’s improv; we just try and refine the show night after night.

I love being in the moment and I live for when unexpected things happen; we perform for different audiences every show, and every audience is unique, just like every person is unique. People get into this routine where one day blurs into the next, and the show is just a reminder to stopp, look, and listen – to use this universe we have between our ears to explore.