There aren’t too many theatrical stops on the typical American in Paris tourist itinerary. It’s not uncommon for tourists to visit the Opéra-Garnier, and perhaps see a show at the Moulin Rouge, but by and large they’re missing out on a vital part of Parisian nightlife. 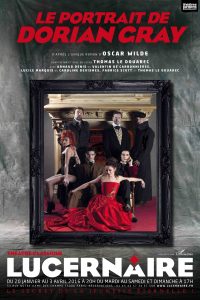 Paris is home to more than a hundred operating theatres; if one includes cabarets and other less formal spaces, the number climbs over two hundred. Stay in any arrondissement and you’ll be able to catch a show, often for very cheap seats. It helps if you have at least an intermediate fluency in French, but study a synopsis in advance and you’ll be surprised at how well you can follow things.

Le Portrait de Dorian Gray (The Picture of Dorian Gray), now playing at the Lucernaire in Paris, is a straightforward stage of the classic Oscar Wilde novel about a man who embraces the darker side of his passion, slowly destroying or rejecting everything good and bright in his life – including the people around him. (If you watch Penny Dreadful, this is the source material from which that show’s character Dorian Gray is pulled from and recast.)

The Lucernaire is an intimate space and this production directed by Thomas Le Douarec is up close and personal, following the school of realism. The show has rotating casting; the reviewed performance featured Valentin de Carbonnières as Dorian Gray and Caroline Devismes as Sybil Vane, Sally, and La Duchesse. The remaining parts were performed by Fabrice Scott (Basil Hallward, Le Peintre, James Vane, and Le Pianiste) and Thomas Le Douarec (Harry and Lord Henry Wotton).

Charisma is a key aspect of Dorian Gray’s downfall, and De Carbonnières exudes it. In the first Romeo and Juliet scene, Devismes was lovely and engaging, making Gray’s enrapturement and subsequent engagement a natural and believable step. You feel for the characters – for ill and good – and that’s a good thing, because this is a long rollercoaster of a play. It’s an acting tour de force.