You are here
Home > Arts > FEATURE: The End of an Era: Minnesota Centennial Showboat’s Farewell Season 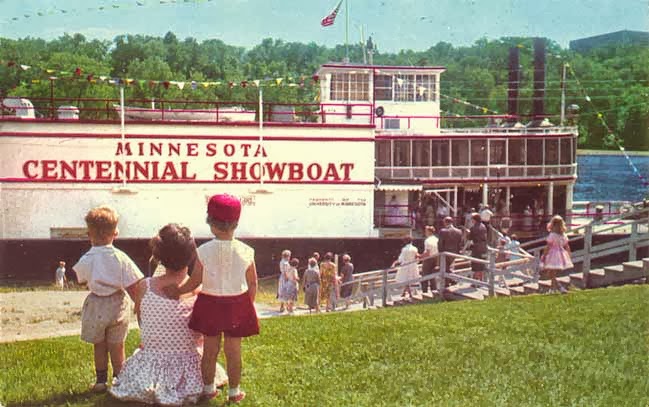 April 19, 2016 was a sad day on the Mississippi. That day, the University of Minnesota’s Department of Theater and Dance announced that the Minnesota Centennial Showboat – a staple on the river since 1958 and the first paid theatre position to many past and present theatre professionals in the Twin Cities and across the nation – would cease to operate at the end of the summer. Its 57th and final season opens on July 7, 2016.

This riverside icon was born in 1956 as the 100th anniversary of Minnesota becoming a state approached. The University [of Minnesota’s] Theatre Director Frank M. Whiting and Tom Swain, the Executive Director of the Minnesota Statehood Centennial Commission, searched for a suitable riverboat to house a theatre. A boat named the General John Newton, originally commissioned in 1899, happened to be available as government surplus property, and  was purchased for $1.00. The University and the Centennial Commission came up with the necessary $50,000.00 to convert the boat into a 210-seat theatre.

The University Theatre used the Showboat (as it was commonly known) as a learning tool for its students and to provide students with paid work both their performances as well as other backup duties such as ticket sales, concessions, maintenance, and ushering. True to the original era of showboats, the University used the Showboat to produce old fashion melodramas which were the most popular theatrical genre of the 19th Century. As with the 19th-century showboats, audiences were encouraged to boo the villains and cheer the heroes.

The Showboat also brought back the art form known as olios: short musical numbers between scenes or after a show that told stories were unrelated to the melodrama. Although melodramas are considered campy today (outside of 19th-century opera, where they are alive and well – witness, for example, Minnesota Opera’s Tosca this season), in the past they were considered very intense drama…so intense that olios were originally developed to relieve a show’s dramatic tension. These elaborate musical interludes, often with outstanding costuming, have often been the highlight of the Showboat’s productions.

The Showboat opened its first season in 1958 with Augustin Daly’s 1867 melodrama Under the Gaslight. It was directed by Frank M. Whiting and the olios were directed by Robert Moulton. A notable featured member of this inaugural cast was Bain Boehlke, who went on to become the long-time Artistic Director for the Jungle Theatre. The Centennial Showboat continued its successful run on the General John Newton through 1993; I myself worked in the business office of the showboat selling tickets during the 1978 and 1979 seasons. Ticket prices back then were $4.00 for students and $5.00 for everyone else. The 1978 production of Dracula was so popular that we sold out weeks in advance and I even had patrons offer bribes if I could “find” tickets for them.

For its first 35 years of operation, the Centennial Showboat was moored on the Mississippi River on the East Bank of the University of Minnesota-Twin Cities campus. From 1958-93, over 600,000 people saw shows on the Showboat. After the 1993 season, however, the Showboat closed because of much-needed and expensive repairs that required a capital campaign funding drive to raise the money. Then, in 1995, the City of St. Paul offered the Showboat a permanent mooring as part of its efforts to revitalized Harriet Island.

The Showboat was scheduled to reopen in 2000, but tragedy struck. In the midst of a $2 million renovation, the General John Newton caught fire from a welding torch spark on January 2, 2000 and was severely damaged. Like many others, I was sad to hear the news—especially since I had my wedding pictures taken on that boat.

The silver lining of the fire was an outpouring of community support afterwards. Through a partnership with the Padelford Packet Boat Company and community donations, the University built a new Showboat which included a replica of the Newton’s jewel-box theatre. Despite my nostalgic feelings for the Newton, the new boat was a significant improvement. In honor of the University Theatre Director who helped launch the original Showboat in 1958, the new boat was christened the Captain Frank M. Whiting.

The Whiting boat incarnation launched its first season with a production of Dr. Jekyll and Mr. Hyde on July 5, 2002. Summer performances with olios were performed each season through 2014. The 2014 season, however, was marred by excessive rains and the flooding of Harriet Island, which made it impossible for patrons to access the Showboat for a couple of weeks. Due in part to the loss of revenues in 2014 from the rains, the decision was made not to have a 2015 season.

The end of the Showboat as a theatre genre closes the door on what has been an amazing incubator for developing professional theatre talent both locally and nationally. The production and cast lists for the past 56 seasons reads like a Who’s Who on the Minnesota theatre production scene. Some of the names that are familiar include:

Even my former alum from the Showboat’s business office, Casey Stangl, has become a nationally known director and gone on to direct shows at the Guthrie Theatre.

For its final season, the Showboat will be performing the same play it opened with in 1958: Augustin Daly’s classic Under the Gaslight, complete with olios. Performances will be running from July 7–August 27, 2016. There are 2:30 pm matinees every Tuesday, Wednesday, Thursday and Saturday with evening performances at 8:00 pm on Wednesdays through Saturdays. The Showboat has proven to be a rich part of Minnesota’s theatre history and this summer offers a chance to experience it one last time before it sails into the sunset of history.