You are here
Home > Arts > REVIEW: Waiting and Missing <em>Waiting for Waiting for Godot</em> (Loudmouth Collective) 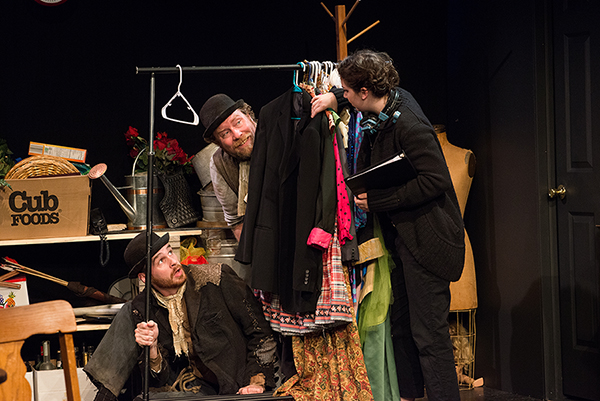 But while I waited, I talked to talk with the show’s director, Mathew Sciple. We both agreed it was quite a coup for the Loudmouth Collective to find this play by Dave Hanson. (WFWFG premiered at the New York Fringe Festival in 2013 and has had additional productions in Florida and London before its current Minneapolis run.) Sciple emphasized to me that this was not an absurdist piece but a comedy and he asserted that in this day and age we are all quite used to “Theatre of the Absurd.”

Until I saw this show, the best satire of Waiting for Godot that I was aware of was the 1970s Saturday Night Live (SNL) comedy sketch with Kris Kristofferson titled “Waiting for Pardo.” (Don Pardo was the announcer who voiced the SNL intro and was often heard on game shows, describing prizes for contestants.) The SNL version is constantly being interrupted with Pardo voicing promotions such as “I think therefore I am” and “Watches from Descartes…”

WFWFG also proves to be is a very humorous satire of Beckett’s master work. Hanson’s play may not be a piece of absurdist theatre, but it floats upon the existential banter of Samuel Beckett’s famous characters, Vladimir and Estragon. From the beginning, the dialogue of a performance of Waiting for Godot is heard audibly while two seeming vagabonds are in recluse backstage. They are reportedly the understudies to the main characters, but they quickly become enmeshed in their own existential crisis. They even appropriate iconic lines from the play, such as: “Nothing to be done.”

Open Eye Figure stage was a fitting environment to stage this play. It’s small, intimate with a slight anachronistic feel that lends itself to this off-beat play. The performances of Sam Landsman and Gabriel Murphy as the two understudies are not over-intellectualized and contain a lot of physical humor. While their routines are funny, they never go over the top. But being well versed in Beckett’s work, one could sense a potential hilarity that was repeatedly missed.

The entrance of Sulia Rose Altenberg as the Assistant Stage Manager, makes for a situation that almost reaches hilarious proportions. She’s in a panic because a medical emergency halted the performance of Waiting for Godot. She abruptly enters the backstage universe of the “understudies” as if she had entered the Twilight Zone. She’s taken aback. She never heard there were understudies for the play. Who are these guys and what are they doing here? She says they’ll have to talk to the director and draws the first big laugh of the show when she says the director’s not available…so they’ll have to wait.

The level of intensity of this satiric moment is unfortunately not sustained and never returns. This occurs even though the audience is primed for deeper delving into the plight of the characters. Suddenly, everything we had learned about the two characters was thrown into question – are they or are they not the understudies for Waiting for Godot? Or, like the play’s characters, is there also no point to their existence?

Beckett’s answer would be that “nothing to be done.” At any rate, these guys really have an existential problem. They wait to be understudies in play. Even when that play is no longer being performed, they still wait and are probably still waiting today.   For those familiar with the famous Beckett play, waiting with these guys is worth the time.