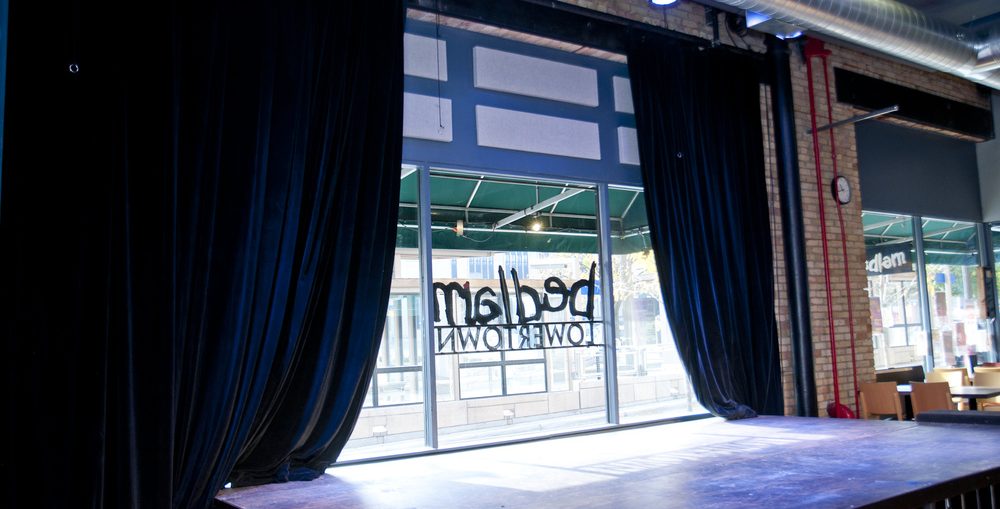 On May 31, 2014, Bedlam Theatre formally opened its new home in St. Paul, the succinctly named Bedlam Lowertown. On November 2, 2016, Bedlam Lowertown will close. In an email sent to Bedlam newsletter subscribers, the organization cited construction delays, cost overruns, and overwhelming debt as the reasons for its close.

Bedlam Theatre was formed in 1993 by a group of 10 founders: Maren Ward (the current artistic director), Julian McFaul, John Bueche, Doug Flateau, Robert Kerr, Lars Myers, Alissa Cooley, Amy Steiger, Cara McChesney, and Josh Schultz. In 1996, the company created the Bedlam Studio in the West Bank neighborhood of Minneapolis, taking on a more significant role as both content creator and host in 2000. The company’s reputation for edgy subjects and boundary-pushing content attracted national attention; in 2004, for example, it was featured on the cover of American Theater Magazine.

The year 2007 saw Bedlam make a major move and expansion into what was called Bedlam Social, where it added a full restaurant and a beer+wine bar, making it even more of a community hangout. Bedlam Social only lasted until September 2010, however, when rising rents in Cedar-Riverside sent the company across I-94 to Minneapolis’s Seward neighborhood. (The space that Bedlam Social occupied became the Dar Al-Hijrah mosque, reflecting demographic changes in the neighborhood.) Redevelopment, urban renewal, and gentrification in Seward helped propel the search for a new and (hopefully) more permanent home.

Across the river, the director of arts and culture for the city of St. Paul, Joe Spencer, held out an olive branch to Bedlam: the old Rumours & Innuendo nightclub space in Lowertown, which had been vacant for several years. At the time, it seemed a perfect space; the Green Line seemed well under construction and Lowertown St. Paul was charging through redevelopment. A $150,000 Cultural Star Grant from the city sweetened the pot, starting the process rolling.

As many St. Paul restaurant and other business owners can attest, the long and painful construction process that surrounded the Green Line was considerably longer and more disruptive than anticipated. Similar things might be said of the process of turning Rumours & Innuendo into Bedlam’s new home, which took years and became an increasing financial drain on the company’s operations. Still, energy was high when Bedlam Lowertown finally opened on May 31, 2014 (disclosure: I played piano at the opening festivities) and the new space quickly became an active hangout.

Financial problems have a habit of lingering, however, and Bedlam subscribers soon noticed a number of urgent pleas for support as the company battled with an expensive new space, a pricey mortgage, and debt from unanticipated renovation costs. A related blow came from the gentrifying of Lowertown itself: what was hailed in 2012 as the highest concentration of artists in a St. Paul neighborhood was directly undermined by soaring property values that forced out individual artists and sometimes entire buildings.

Although various measures temporarily staunched debt and cashflow crises, the cost-vs-revenue problem in Lowertown was never permanently resolved; by August 2015, MPR was reporting that the company’s days in St. Paul might be numbered – according to Bedlam’s own numbers, the company had just four months to raise $400,000 after missing several payroll payments. Thursday’s evening announcement that Bedlam will close was unexpected, but not entirely surprising.

One of the tragedies of gentrification is when the qualities that first make a neighborhood attractive to new residents are expunged by their arrival. Artists are familiar with this cycle: they habitually move into cheaper (and often crumbling) neighborhoods where they can afford to practice their art, drawing in new visitors and later residents who are attracted to the art. Bedlam was certainly popular in its home – as John Bueche noted in 2015, it was labeled the Best Artsy Hang Out Scene 2015, made the list of Ten Clubs Revitalizing the Saint Paul Music Scene, and called one of the Eight reasons why the cool kids now live in Lowertown. It even became a hip place to hang out and hear a variety of Hmong and Korean bands. It just wasn’t popular enough for the costs associated with its space.

Too large and too fast an influx of new residents causes rental prices to spike, however, squeezing out artists who haven’t bought real estate. Eventually most of the artists are forced to leave, hollowing out the now expensive neighborhoods that they once gave life to. While there are many factors in the calculus that caused Bedlam Lowertown to close, the basic problem is one that cities across the United States need to confront: What will they do to ensure that neighborhoods remain vital and sustaining?

The announcement from Bedlam Theatre follows:

With a fully stocked all-you-can-eat buffet of emotions, we announce that Bedlam Lowertown will be closing on November 2. While we are sad to lose this venue that has become beloved to so many in Lowertown and beyond, we want to spend our last few weeks in celebration of the vision that was tested and tried, the relationships made, and the community investment that allowed Bedlam Lowertown to exist for 2.5 years.

Please join us for a packed two weeks including:

With significant community support, Bedlam opened a state-of-the-art facility in May, 2014 in time to be in Lowertown for the heavily anticipated Green Line Opening. In its 2 plus years we served over 50k audience members and presented nearly 1000 unique music, theater and community events. Bedlam’s opening was delayed a year due to construction and code issues including the need to overhaul the buildings heating and cooling system. The project overran its anticipated cost by 600k. After nearly closing on its first anniversary, community, board and staff rallied to keep it open for another year while multiple stakeholders strategized to overcome the debt situation. Though serious efforts were in the works, the clock has run out on some significant debts and we must close.

This was a highly ambitious project and there are many whys and why nots and coulda-shoulda-wouldas. We welcome this conversation and aim to be as constructive as possible toward future efforts of this kind. We hope that something equally if not more magical happens in this venue going forward. We don’t see this as a failure though we recognize the impact such a venture has had–the ups and the downs and the unpaid bills. The Bedlam Board will continue to trouble shoot the debt. The fate of Bedlam Theatre is unclear at this time. We will keep you posted.

Our most heartfelt thanks go to our staff, artists, supporters, donors, audience members, and everyone who has been part of the Bedlam community throughout the years.