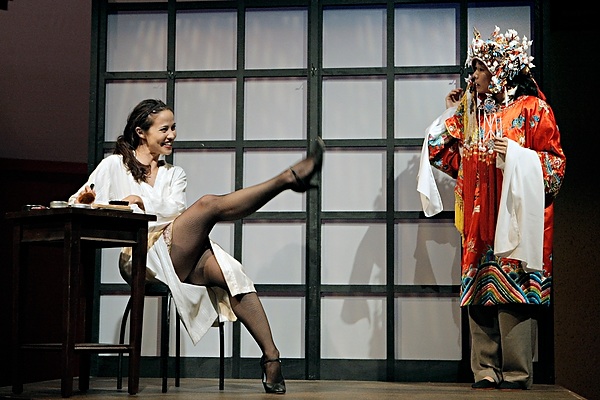 It’s been three years plus change since Randy Reyes took over the artistic directorship of Mu Performing Arts from founder Rick Shiomi. In the interim, Reyes has been busy, leading the nationally acclaimed Asian American theatre company through what in retrospect has been a period of great changes in the Twin Cities theatre scene, especially in the upper echelons of leadership. Reyes took some time in the holiday season to chat with the Arts Reader‘s Basil Considine about Mu’s upcoming production of the Rogers & Hammerstein musical Flower Drum Song (which he directs), season programming, and more.

You’re doing Flower Drum Song with the 2002 book by David Henry Hwang, which bears very little resemblance to the original besides the score and character names. What makes this version of the musical so attractive?

In this version of FDS, David Henry Hwang explores the tension that immigrant communities have between holding on to your cultural identity and assimilating to American culture and how that tension plays out between the generations.  This is explored from the perspective of art and entertainment.  The father is holding onto his Chinese Opera roots while the son wants to run a western-style nightclub.

Given current politics and economics with China, does the escape-from-communism story still play as well?

In the original script, the Mei Le character arrives as a picture bride, while in Hwang’s version she escapes China in pursuit of a better life in America.  The story of people fleeing their country in search of a better life is very prevalent in our world today.

One of the complaints that was voiced about staging the original Flower Drum Song was that theatre companies had trouble recruiting a full cast of Asian and Asian American actors. It’s been almost 60 years since that show premiered on Broadway – how hard (if at all) is it to cast a show like this with an all-Asian cast in the Twin Cities?

If Mu can cast an all-Asian cast in Minnesota, then it’s clear that that is no longer the kind of issue that it might have been back then.

When people say that they can’t find enough Asian actors, I think the bigger issue is resources and due diligence.  There are plenty of amazing Asian American talent, especially in the coasts, and it’s just a matter of seeking them out.  We don’t have as many Asians in the Midwest, but we are finding  ways to nurture and develop the ones that we have.

Our biggest challenge is finding older Asian actors. We are a relatively young company of actors that are slowly, but surely growing old together.  But that’s going to take time.

Mu also did Flower Drum Song 7 years ago – why again and why now?

When Mu did FDS 7 years ago we did it at the old McKnight Theater in the Ordway and it ran during the 4th of July weekend.  I never felt we got the audiences that we could have gotten.  And with our partnership with Park Square, we have more resources than we’ve ever had to be able to put up a higher quality show.

The story of an Asian American performing arts company wrestling with their identity and survival in America is the story of Mu.  So FDS is a perfect way to celebrate Mu’s 25th anniversary!

Mu is participating in the Guthrie’s Level 9 initiative in May with Lloyd Suh’s Charles Francis Chan Jr.’s Exotic Oriental Murder Mystery. How did this collaboration come to be? Why this space for this production?

Mu has been producing shows at the Dowling Studio since the Studio was build.  We produced Circle Around the Island there in the 2006/2007 season.  So I presented them with the possibility of Mu producing Charles Francis Chan before that Level 9 initiative was confirmed.

Every season that Mu does seems to have one very provocative, eyebrow-raising title (e.g., this season’s The Two Kids That Blow Shit Up and 2013-2014’s Kung Fu Zombies vs. Cannibals). Is this an unwritten rule or the demand of an eccentric donor?

The provocative and eye-raising titles come from the Asian American artists that are writing these plays.  I’m just interested in producing a diverse offering of great Asian American plays and these are the pieces that are being created.