You are here
Home > Arts > PREVIEW: Melissa Etheridge @ The Ordway

Tomorrow, singer-songwriter and all-around rocker Melissa Etheridge descends on the Ordway Center for the Performing Arts for a one night-only engagement.  Etheridge emerged in the 1990s as one of the decade’s most prominent women songwriters, a distinction she shared with both Jewel and Sheryl Crow. Her self-titled album Melissa Etheridge made the Billboard Top 25 and garnered a Grammy nomination for “Bring Me Some Water,” kicking off a string of hit albums that attracted both critical and popular attention.

In addition to selling records and being praised for her smoky vocals and deft, confessional songwriting 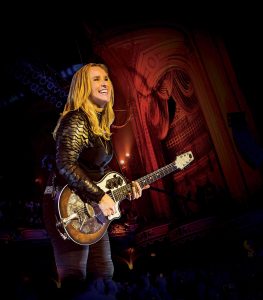 , Etheridge became a key LGBT icon in the music industry after publicly coming out as a lesbian in 1993. That same year, she won her first Grammy Award for “Ain’t It Heavy,” followed by a second Grammy Award for “Come to My Window”; her music has been nominated for the Grammies 15 times. In 2007, she won the Academy Award for best original song in “I Need to Wake Up” from the Al Gore documentary An Inconvenient Truth, beating out three songs from Dreamgirls and Randy Newman’s “Our Town.”

Etheridge is best known for the personal nature of her songs, including those related to her coming out about her sexual orientation in the album Yes I Am.  Breakdown and Skin are artistically two of her best albums, featuring intensely personal songs concerning the disintegration of a relationship and the rebuilding that occurs afterwards. Thursday’s performance will feature both familiar classics and new songs from her 2016 album MEmphis Rock and Soul [sic].

M.E. Live – Melissa Etheridge plays at the Ordway Center for the Performing Arts in St. Paul, MN on Thursday, Jan. 5, 2017.