A protest scene from SteppingStone Theatre’s production of Ruby! The Story of Ruby Bridges by Christina Ham.

It’s February in the United States, a time that some see as set aside for the contemplation of the history of Blacks in the United States and the world at large. For others, it’s a time whose very need to be set aside speaks to an ongoing mental segregation of the events, actions, and experiences of a large and important portion of the U.S. and world populations. In this particular case, it’s a catalyst for SteppingStone Theatre to revive its now-classic production of Christina Ham’s Ruby! The Story of Ruby Bridges. 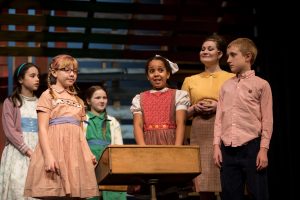 Editor’s Note: Steppingstone Theatre gave the world premiere of Ruby! The Story of Ruby Bridges in 2013. This review describes the company’s 2017 revival of this children’s musical.

Ruby! evolves a little each year; this year, Ansa Akyea helms the production as director. The result is a little less raw in some scenes than last year’s – it gets the point across, but the bitter realities of Ruby Bridges’ experience seem a little, well, faster to resolve. The product is still a fine children’s show, but it seems an oddly calibrated choice given some of narrative’s resonance with present-day events. 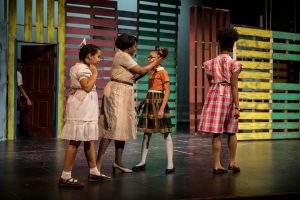 Vocally, the musical sections have some extra pizzaz compared to last year, in no small part due to the addition of the excellent Nicole Korbisch as Mrs. Barbara Henry. As the titular Ruby (in her younger incarnation), Brianna Bergin plays the part well, especially in the more tense scenes with protestor confrontations.

Come for the story, stay for the talkback with the cast – and the questions from the audience.

—
Ruby! The story of Ruby Bridges plays through Feb. 26 at Steppingstone Theatre in St. Paul, MN.