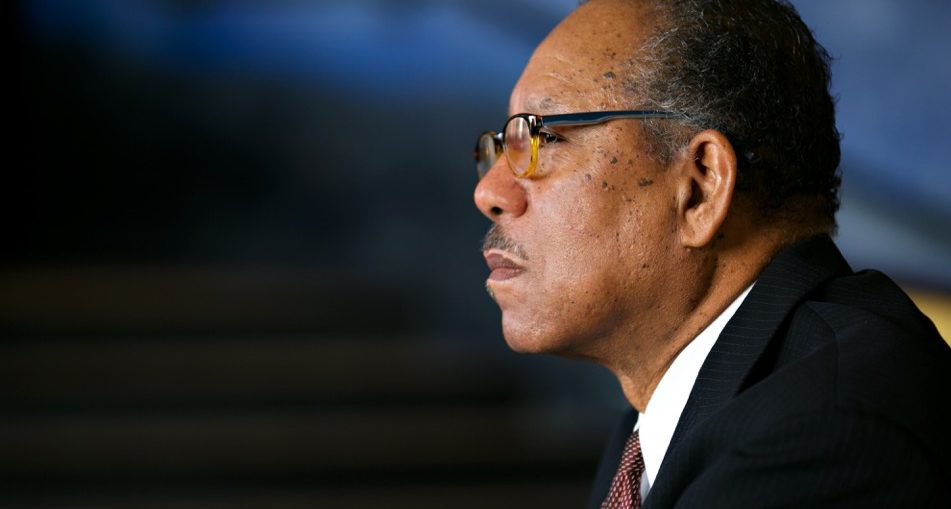 James Craven in the Illusion Theater’s Thurgood. Photo by Lauren B Photography.

The Illusion Theater is reprising its 2015 production of George Stevens, Jr.’s play Thurgood.  Thurgood shines a light on the life of Justice Thurgood Marshall (1908-1993). Marshall was a legal superstar who successfully used the law to bring social and political change.  He is best known in history as the first African-American justice on the U.S. Supreme Court, but his greatest accomplishments occurred when he was chief attorney for the NACCP (National Association for the Advancement of Colored People).

Thurgood Marshall was a true believer that law could be a tool for social progress and served as an inspiration to aspiring attorneys of all races (including myself).  He successfully argued several cases before the U.S. Supreme Court, including the landmark school desegregation case of Brown v. Board of Education.  His efforts in Brown were truly the highpoint of his life’s work and legally paved the way for greater demands for equal justice under the law.

James Craven returns in the role of Marshall in a powerful, one-man show at Illusion Theater that is directed by Michael Robins.  The story opens with Marshall returning to Howard University in Washington, DC, where he obtained his law degree.  Marshall uses this occasion to talk about his childhood and the important cases he litigated to bring about greater equality and justice. The best part of the performance is when Marshall tells the personal stories of the individuals involved in these famous court cases and the personal risks they took when making their legal challenges against segregation.

When the show ran in 2015, the St. Paul Pioneer Press praised the show, saying, “The show is a revelation — not just of history – but of the courage and compassion of a true American hero.” The show informs a new generation of the sacrifices that were necessary to obtain and protect civil rights.

Thurgood runs at the Illusion Theater in Minneapolis, MN through March 19.