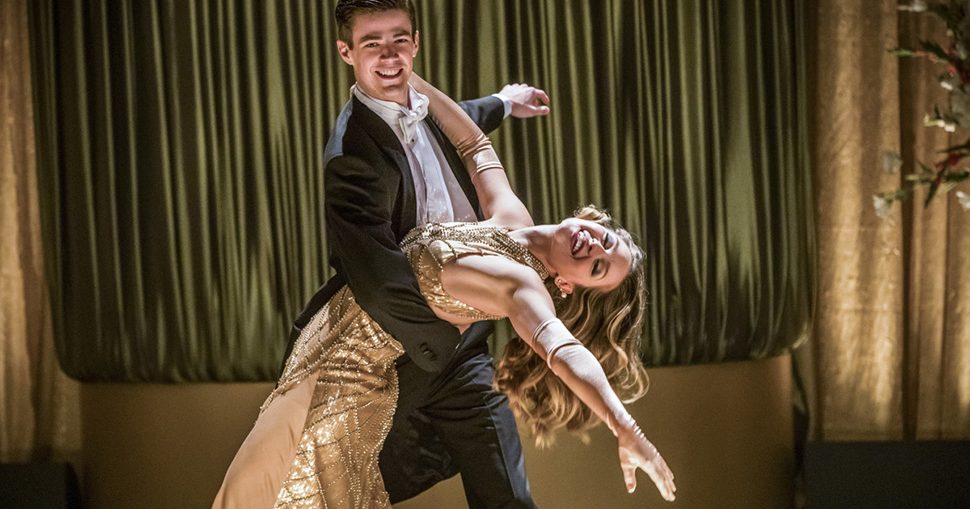 “My mother used to say that musicals had the power to make everything better.” In this evening’s musical episode of The Flash, we learn that The Flash and Supergirl grew up watching movie musicals. It’s the sort of previously undisclosed detail that seems entirely plausible – both because of how classic musicals are woven into American culture, and because there’s a similar thread of whimsicality in both superheroes and their respective TV shows. Neither Supergirl nor The Flash take themselves too seriously most of the time, especially when poking fun at the absurdities of the supervillain of the week (Killer Shark, anyone?). Tonight’s crossover episode, “Duet”, takes this a step further, with a gentle riffing on the tropes of movie musicals. 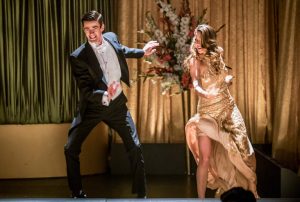 This musical episode was hotly anticipated on social media and largely delivers. The basic plot is that the alien supervillain Music Meister (played engagingly by Darren Criss, who chews scenery excellently) traps Supergirl and The Flash in a gangster musical world in which they play nightclub singers. There are five songs:

“Moon River” is the first song of the show, sung by Melissa Benoist as Supergirl realizes that she’s been thrust into the spotlight. Her singing voice is light at the beginning, but the ending is enough to make you hope for a more fully version as a soundtrack episode.

“More I Cannot Wish You” from Guys and Dolls, was sung by Victor Garber, Jesse L. Martin, and John Barrowman. In solo passages, Garber’s vibrato is distractingly wide, but when the trio join together the contrasting voices become a pleasant spin on a familiar classic.

“Put A Little Love in Your Heart”, a 1969 hit made famous by Jackie DeShannon, is delivered by Darren Criss with Jeremy Jordan, Carlos Valdes, and John Barrowman. This big song-and-dance number is a pleasure to hear and to see, with engaging staging and cinematography. It’s one of the standout highlights of the episode.

The duet “Superfriends”, one of the two originals, is an amusingly cheesy piece written by Rachel Bloom of Crazy Ex-Girlfriend fame and Tom Root. Sung by Grant Gustin and Melissa Benoist, it’s both catchy and tongue-in-cheek, and has tap dancing choreographed by Zach Woodley (best known for his work on Glee.

As with any good musical, however, this episode saved the best for last: the original ballad “Runnin’ Home to You,” which was co-written by Benj Pasek and Justin Paul. (You may have heard of a recent project of theirs called La La Land.) Change one or two details of the plot or placement, and it would be a splendid torch song. Place it at the end of an act, and it would be the sort of tender showstopper there aren’t enough of anymore. At the close of “Duet”, it knits back together a fractured relationship and makes you want to cry tears of meaning and happiness.

If “Superfriends” is tongue in cheek, “Runnin’ Home to You” is absolutely serious as Grant Gustin plucks at your heartstrings. Gustin’s tenor voice is sweet, tender, and pregnant with meaning and emotion in this song. After three years as Barry Allen on The Flash, you might have forgotten that Gustin, too, was on Glee – but he never delivered a performance like this on that show. The recording process is also missing much of the overproduced and heavily Autotuned sound that characterized Glee. The result is simply better than most of La La Land and Glee, a song that will likely have a long life in concerts and coffeeshops.

In the end, “Duet” is a lighter musical episode than fans might have expected, with only five songs, but the songs and dance numbers deliver. The music fits neatly into the plot, and that last song is to die for.

Well, hopefully not literally to die for in the case of Iris West – but you get my drift.