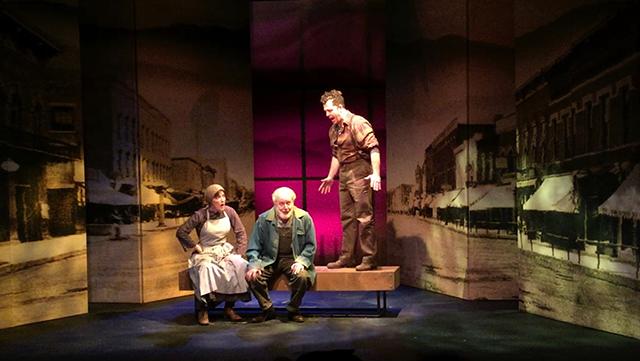 If your life is missing opera and you can’t wait until La Bohème arrives in May, see Twisted Apples. For that matter, if you like opera, period – or stories told with interesting, beautiful, and emotional turns of music – see Twisted Apples.

On the trees are only a few gnarled apples that the pickers have rejected. They look like the knuckles of Doctor Reefy’s hands. One nibbles at them and they are delicious. Into a little round place at the side of the apple has been gathered all of its sweetness. One runs from tree to tree over the frosted ground picking the gnarled, twisted apples and filling his pockets with them. Only the few know the sweetness of the twisted apples.
––Sherwood Anderson, Winesburg, Ohio (1919)”

The title of Twisted Apples: Stories from Winesburg, Ohio, now playing at Nautilus Music Theater in St. Paul, is something of a formatting misnomer. Winesburg, Ohio is a 1919 novel by Sherwood Anderson, whose eponymous town is confusingly fictional despite the existence of an actual Winesburg, Ohio (no relation). The libretto by Jim Payne is derived from several of the vignettes in the novel.

If you had to put a label to Twisted Apples, the work is an example of the opera comique genre, with a loose but distinct boundary between speech and song. Most of the dialogue is spoken and there are substantial monologues, while the singing and vocal writing sit in a distinctly operatic idiom despite the prominent use of accordion. A small and talented cast plays a variety of characters through a series of interlinked vignettes, not all of which occur in chronological order.

There is much to be said about what is good in this opera and its production. The singing is excellent, up close, and intimate; the music is interesting and pleasing to the ear; and the characters arouse interest and sympathy as they grapple with age-old questions with no easy answers. The weakness of Twisted Apples is its length: Acts I and II flow very well together, while the substantial Act III seems superfluous – although it does show another side of some characters and their story, its primary reason for being seems to be to include the reference from which the opera takes its name (see sidebar). Act III is reasonably self-contained and would work fine as a standalone piece, but placed after the others it makes the evening drag somewhat.

I myself remember with what a shock I heard people say that one of my own books, Winesburg, Ohio, was an exact picture of Ohio village life. The book was written in a crowded tenement district of Chicago. The hint for almost every character was taken from my fellow-lodgers in a large rooming house, many of whom had never lived in a village. The confusion arises out of the fact that others besides practicing artists have imaginations. But most people are afraid to trust their imaginations and the artist is not.
––Sherwood Anderson, “A Note on Realism” (1924)

The stories that unfold in Acts I and II have the advantage of being more compelling and immediate, which is odd to point out against the planned murder of a spouse in Act III. This comes in part from the former acts’ their resonance with debates in contemporary culture: with Supreme Court confirmation hearings in process, talk has returned to the possibility of Roe vs. Wade being overturned by a more conservative-leaning court. This topicality that gives an extra edge and poignancy to the emotional turmoil captured in Gary Briggle (as Ray Pearson)’s nostalgic and moving rendition of “The Hills Call to Me” and a tour de force performance of “Where Did Tomorrow Go?”  Editor’s Note: Song titles from the score have been added to this review. The original version of this review used song titles based on introits and the reviewer’s notes on the lyrics.

According to Sartre’s No Exit, hell is other people. They are certainly the source of much confusion, temptation, and ferment in Twisted Apples, which comes to a head in several interesting trios, notably Act I’s “Walking”. This is often done humorously, as in J.P. Fitzgibbons (as the Reverend Curtis Hartman)’s double and triple entendre-filled aria of temptation, but when it’s done in full seriousness, the score by Robert Elhai and the libretto by Jim Payne go for broke. (If you want to know what the pastor is so passionate about, sit on house left for a notably different look at the object of Hartman’s affection, schoolteacher Kate Swift (played by Norah Long). Long’s engaging performance makes the unacquainted reader quite interested to learn more about this character. She’s not the “One Little Girl in Blue” that Eric Morris (as Hal Winters) sings about, but Swift certainly hints at a lot of off-stage adventures. (“One Little Girl in Blue”,  a lively number, seems destined for opening recital programs somewhere.)

The staging of Twisted Apples deserves some mention. The Nautilus studio space is broken up into multiple levels by the addition of platforms, with no seat too far from the action, distinct senses of space, and a dynamic sense of transition between vignettes within this small little town.