You are here
Home > Arts > INTERVIEW: Ilima Considine as the Sexbots on SXSW, <em>Summertime</em>, and More 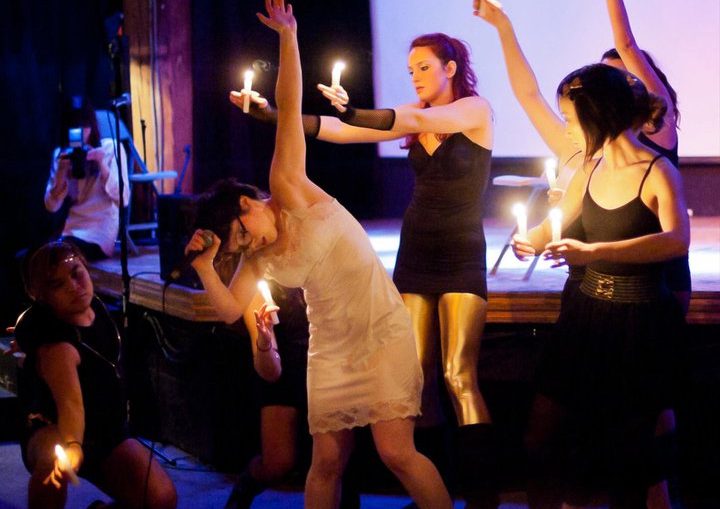 Two weeks after the 2017 installment of South by Southwest closed its doors, it’s still the post-recovery (and/or hangover) period for festival attendees. Since its founding in 1987, this Austin, Texas-based festival has grown from a small new music festival to one of the largest and most influential film, music, and technology festivals in the world. Like Burning Man, Coachella, and a host of other festivals, it has also become legendary for its party scene and the skyrocketing costs of both attending and participating. This tremendous growth has many ramifications for the city of Austin, its residents, and its visitors, who must weigh the growing costs with the opportunities presented.

One consequence of the current immigration climate appears to have been an increasing crackdown in visa enforcement, with several performing groups being denied entry into the United States. Another consequence of the festival’s upfront costs: a 2015 New York Times feature pegged the average cost of performing for a trio of performers in an official showcase at $10,000. Attending is cheaper, but only relatively so: a jaw-dropping $1,650 at the door for a Platinum Badge if you want to see a bit of everything. As with the intertwined formation of the Edinburgh Theatre Festival and the Edinburgh Fringe Festival, SXSW’s costs have spawned a large number of unofficial performances and showcases coinciding with the festival.

The Twin Cities Arts Reader spoke with multidisciplinary artist Ilima Considine of The Sexbots about performing at South by Southwest, touring, physical vs. Internet-based distribution, and more.

You recently performed at South by Southwest. This is a festival that has grown tremendously in the 30 years since its formation, and where the participation costs have escalated tremendously as well – both for official acts, and for unofficial performances coinciding with the festival. Why did you perform, and what were some of the high and low points?

I performed at unofficial showcases that did not require badges of either the attendees or the musicians.  I’m a bit late at joining into the SXSW fray, but I wanted to witness it firsthand at least once.  It’s definitely a zoo – a weeklong party that gets shut down every night by horse cops.  It’s like Vegas…you have to see it for yourself or be [left] forever curious.

Now that I know [what it’s like], I don’t feel like I need to do it again.  Even for those who are there on sponsored stages, I feel like their efforts onstage were getting lost in the relentless party atmosphere.

High points were every time I bumped into someone on the street whom I had met in another city there.  Low points were being stalked and the venue allowing my stalker to enter.  I hid in the women’s bathroom until they got tired of waiting for me.  During a later act, a young woman came and stood next to me.  She said, “I’m going to stand next to you because you’re the only other girl here.  I know this is a safe space (next to you).”  I smiled, but it gave me chills.

Some acts fly right in for South by Southwest, while others make it part of a road tour. I understand that you picked the latter option – what were some of the stops along the way? How do you break up the performing and driving with other activities?

We stopped and played shows in Boise, ID and Logan, UT, then filmed a music video in the desert.  We also stopped to help out a couple stranded motorists in the middle of the Texas desert – I had AAA and was able to call for help, but had to wait to show them my membership card.

There were [also] a couple cigarette smokers in our party, so there were a lot of smoke breaks at truck stops in small towns.

Tell me about the genesis of the latest album from The Sexbots. How did you first conceive of The Girlfriend Experience? What sort of links or thematic connections are there between the songs?

The Girlfriend Experience is a loaded term – it’s code in the sex industry for hanging out with the customer and not just screwing and leaving. [Editor’s note: The Starz television series of the same name follows this same double meaning.] Most of my album titles have double meanings and this is another one.

It had become increasingly clear over the past year that there were strangers all over the world who had a concept of me as a fantasy anime girlfriend – big-eyed and hypersexual.  Half of this album is about that imaginary version of me.  Half is about what my actual boyfriend experiences – my OCD and my anxiety disorder.  Together, these are both The Girlfriend Experience.  These themes and the title were already in place when I started writing the album.

The song “Summertime” on The Girlfriend Experience juxtaposes a lively summer song genre vibe and beat with an unexpected subject. How did you arrive at this combination?

My friend Devast killed himself at the beginning of summer.  A week later, I was reading about serial killers on Wikipedia at bedtime and got too scared to go to sleep.  I thought, if I can’t sleep, I might as well start working on those songs.  This [result] was the first song I wrote of The Girlfriend Experience.

The rise of digital distribution in all its forms – electronic downloads, streaming, viral videos, etc. – is perhaps the most significant and ongoing development for musicians in the last 15 years, going hand-in-hand with the emergence of social media.

You have a fanbase all over the world – how do digital downloads compare with physical album sales? How do you strategize about which channels to use for different projects?

Moneywise, I make more selling physical albums on the road.  Digital sales tend to be a song here, a song there – with the digital distributor taking about a third.  Spotify sends me the odd check, but it’s literally thousandths of a penny per play.  I’ve had things go not internationally viral, but viral on a local level – but it’s not something you can plan on and it doesn’t necessarily translate to song sales, although it can help with booking and promoting shows.

I’ve got an emotional, time, and money budget to distribute. I can’t just run international campaigns like Lady Gaga, so it comes down to making the kind of art as close to my vision as possible…whether that is releasing something with more of a visual component, or not.

Releasing vinyl was a long-held dream, and when I was going over the budget and considering a digital-only release to cut costs, I felt cut in my heart. I had always envisioned these songs being listened to in a particular way – placing the needle on the record, then lying down on the floor in front of the speakers – and I wanted to make that possible for as many people as I could.  I felt very fortunate that my fan base supported this vision.  We raised the money in one month on Kickstarter and the records will be in my hands by summer.

One of the downsides of the rise of social media is the harassment and other inappropriate communication that sometimes results, especially with women in the creative fields. This is unfortunately quite prevalent, and has risen as Internet access has reached the far corners of the globe. Do you think that there is a new netiquette that will develop where more people self-moderate, or is this the new normal?

It is the new normal, but it shouldn’t be.  It has also increased the severity of street harassment because men get practice saying horrible things while other invisible men pat them on the back – it doesn’t feel new or awkward to them when they are out in public since they have been practicing in private and developing their hate vocabularies extensively.

You can’t change people’s hearts, but you can change their behavior with stiff legislation that is ruthlessly enforced.  This is why we need to have as many women judges and legislators as possible.  If you don’t vote, VOTE.

You have a lot of fun on-the-road stories. Will you share one or two?

I was filming a music video at the ruins of a mansion in the woods of New Hampshire and the cameraman went behind a tree to pee.  I was standing there, pale and shivering in a white nightgown(holding the camera bag) and some hikers came out of the woods, froze, and asked, “Are you real?”  They thought that I was a ghost.

It is a little silly, but I like to be picked up at the airport by someone who has a sign with my name on it.  Any tour that starts this way is the best tour.

I was robbed in Cologne on my first European tour.  The audience bought enough T-shirts that I could buy a bus ticket to the Consulate in Hamburg and gave me phone numbers of distant relatives in case I couldn’t find a place to sleep.  The next morning, strangers comforted me when the train was late and I was becoming visibly distraught.  The lady at the consulate gave me a ride to the station after issuing me an emergency passport- where I watched my bus crash into another bus.  When I finally arrived in Berlin, there was a bomb scare but a stranger took me in simply because I was a friend of a friend (one of the bartenders I used to manage while catering used to date someone she was friends with while doing an internship abroad on the East Coast…).

Tour is always an adventure, but it’s a good story, and German people take care of you really well.

What’s up next for The Sexbots?

I’m going to make music videos for each song on The Berlin Stories/The Book of Daniel and I’m going to sell out this record this year.  Also, Utah’s been calling for me to return and I think I will answer that call.

You can follow Ilima Considine as The Sexbots on Facebook. The upcoming double EP The Berlin Stories/The Book of Daniel will be released digitally on April 30, with vinyl shipping in early June.