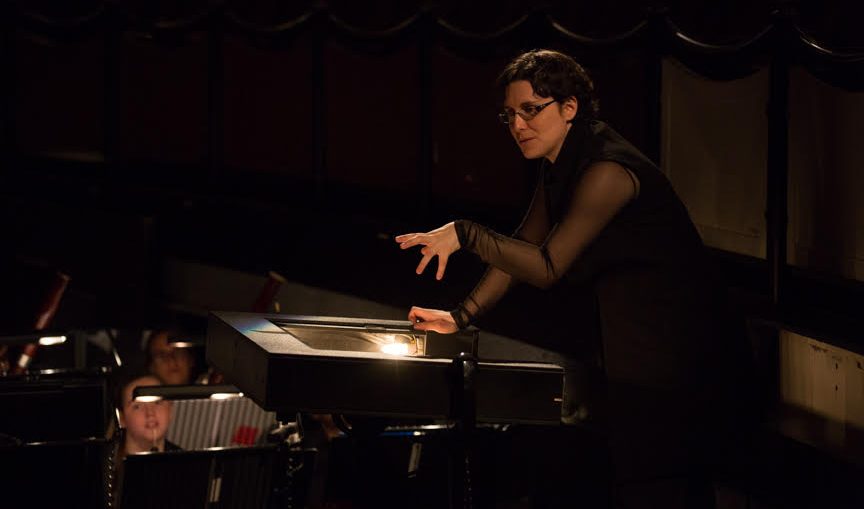 Conductor Geneviève Leclair at the podium. Photo by Rosalie O’Connor, with permission from Boston Ballet.

On Friday, Hat City Music Theater announced the 2016-17 American Prize winners in orchestral conducting. This national award series recognizes distinguished performances by conductors working across the United States. Geneviève Leclair, a professor at Berklee College of Music in Boston, walked away from the competition with two awards: First Prize for orchestral conducting in the college/university division (for work with the Syracuse University Symphony Orchestra) and Second Place in the professional division (for work with Boston Ballet). The Arts Reader‘s Basil Considine spoke with Dr. Leclair about her career, training, and the life of a freelance conductor.

Many conductors have very busy schedules, flitting from engagement to engagement. Looking back on the last 12 months, how many ensembles have you worked with?

In the past year, I have worked with six different ensembles, either on a permanent/full-time basis or on a punctual basis, as guest conductor.

Currently, I am the Music Director for a community orchestra in the Boston area called Parkway Concert Orchestra; I was a full-time Assistant Conductor for Boston Ballet Orchestra until June 2016. I returned to work with Boston Ballet as a guest conductor in December and also made my debut with The National Ballet of Canada (in Toronto) and Orchestre Symphonique du Saguenay-Lac-St-Jean (in Chicoutimi, Canada).

In academia, I’ve guest-conducted the New England Conservatory Philharmonia and Youth Symphony Orchestra and worked with student ensembles at Berklee College of Music, where I teach conducting.

You were honored by the American Prize in two different categories – Conducting – Orchestra, College/University Division with the Syracuse University Symphony Orchestra, and 2nd place in Conducting – Professional Division with Boston Ballet. Boston and Syracuse are about 300 miles apart, which is a bit longer than most commutes. How do you manage your conducting schedule? Is there a certain geographic radius in which you mostly work?

If my schedule allows it, I go wherever I am needed. I don’t really limit myself to a certain radius.

The performance with the Syracuse University Symphony Orchestra was a guest conducting invitation. I commuted between Boston and Syracuse three times per week for three weeks to prepare the orchestra and conduct the concert, while also fulfilling my conducting duties in Boston at the time.

Like most freelancers, I consider the invitations I receive and see if the schedule can be accommodated with any prior engagements.

You come from a flute performance background. Was there any specific impetus or experience that led you to take up the baton?

I started conducting flute choirs in high school and decided right away I wanted to become a conductor. Early on in my higher education training, I received great advice from the conductor of the wind ensemble I played in. He was also a professional tuba player and told me to pursue the study of my instrument at least to the master’s degree level in order to know what playing at a high level is, and to know what you can expect of instrumentalists and how to approach those expectations. This was excellent advice and I followed it, completing my master’s degree in flute performance before starting a doctoral degree in conducting at Boston University.

However, the path was always very clear in my mind. During my master’s degree, I started observing conducting classes, went to summer festivals and master classes, and acquired hands-on experience by putting together an orchestra with my colleagues. I ended up assuming the Music and Executive directorship and conducting 3 full seasons before moving to Boston to pursue my doctoral degree.

Do you still pick up the flute these days?

I have been fortunate to work full-time as a conductor for years now, starting even before I finished my degree. Conducting has really been my main focus for the last decade. But I do still play and teach flute, although not as much as I used to.

In his reflections on the inaugural Women Conductors Institute, Keith Cerny singled out apologizing too much as an area of concern at the podium. Over the years, a number of female conductors have told me that they were advised by their teachers or ensemble managers to be self-effacing and overapologize, which is a contrary stream of advice. Any thoughts/observations?

There are multiple approaches to conducting, as with any profession requiring leadership. I find that there are usually positive points to all of them. Personally, I try to look at the whole picture and craft my own approach, based on my experience and personality.

What works on someone does not necessarily work on someone else. Healthy self-awareness and objective evaluation of effective (and ineffective) interactions are key to improving upon yourself! And I do mean self-awareness and not self-consciousness, which can really impede live performance.

Personally, I don’t recall my teachers ever advising me to be self-effacing on the podium. Had it been the case, I’m not sure my personality would have really allowed me to put that into practice effectively!

Most of all, I believe in being prepared and honest on the podium: true to the music, true to the performance, true to the composer, and true to yourself. I think it’s the only way to maintain the integrity of your work. If I make a mistake, I own it. But I don’t find the need to apologize for who I am.

Like in any field, some people are going to like what you do and some won’t. It’s the nature of life more than the nature of conducting!

That’s a question for the philosopher in all of us! As a conductor, I don’t approach it any differently. I don’t try to shape my presence in terms of gender or in opposition to perceptions of another gender. I am the same person no matter which ensemble I work with and I have never experienced being anybody else so I don’t have a point of comparison… no one does!

In my experience, trying to imitate someone else never yields the most effective results. You have to understand the motivation behind a behavior or gesture and make it your own. Mimicking never feels genuine.

However, I do believe that all human interactions, including conducting, go through the lens of human perception – which means that the same behavior, word, gesture or demeanor may be perceived in a different way by two different receivers of the communication. Similarly, the same behavior, word, gesture or demeanor exhibited by two different individuals may be received differently by the same person. This is true of everyone, not just male vs. female. It does not mean that there is no gender component to perception, but that question goes beyond gesture and podium stance.

There are so many societal and psychological factors that influence our perceptions and much more qualified people than me have elaborated on them. I think the perception of females in the conducting profession is no different than that of females in the workplace in general. We evolve with our society. In the meantime, we can only be ourselves, keep our ears and eyes open, and analyze the information correctly. Maestro Kenneth Kiesler used to say to us in master classes that the number one job of the conductor is to listen. It really all comes down to that!

What have been some key experiences in your life and career as a musician that helped take you to where you are now? Are there certain milestones that you are working to hit in the next few years?

There have been so many, it’s hard to pick! I had the most fabulous flute teacher during my Master’s degree: Denis Bluteau, who was Associate Principal Flute of the Orchestre Symphonique de Montréal. He showed me how to let go, how to be completely in the moment when performing, and how your physicality is completely interrelated to sound production. This proved an invaluable lesson – both as a flutist and conductor.

Early on, I also had the chance to work as Apprentice Conductor for the National Academy Orchestra of Canada alongside Boris Brott. NAO is a mentoring orchestra where young professionals have the chance to play alongside seasoned professionals from orchestras across Canada and international soloists. It provided me early on with the opportunity to experience a professional conductor’s workload and to become more efficient in my score study…not to mention the impact on my musicianship from working with musicians of such high caliber so early in my career. Boris was a wonderful mentor who never counted his time and advice; I also learned a great deal about the business and promotion side of things while watching him work.

Being appointed Assistant Conductor of Boston Ballet was probably the third biggest milestone of my career. I had the opportunity to work with a world-class company, orchestra, and conductor for a year as cover conductor and 6 years as Assistant Conductor. Jonathan McPhee is one of the most experienced ballet conductors in the world and he was also extremely generous in sharing his knowledge of the repertoire, its history and its performance practice.

Conducting ballet is really the perfect place to hone a solid technique. The medium requires the capacity to make music at the highest level of musicianship while maintaining a tempo flexibility that is unusual in a musical performance. The conductor has to be extremely clear and rely on his/her technique to communicate changes in a split second. It also requires an extra level of multitasking, since the conductor has to focus part of his/her attention on what is happening on stage. As an assistant, I regularly had to perform masterworks without having rehearsed with the orchestra, which is also a good honing tool in terms of readiness, study, technique, and nerves. It prepares you for any situation you might encounter in your career. It’s an experience I strongly recommend!

The final milestone so far was probably moving on to a freelancing career. It has allowed me to expand horizons, work with different ensembles and in different contexts, on a variety of symphonic, ballet, and lyric repertoire with musicians of all levels – from amateurs to professionals – and experience a variety of contacts with a wide array of audiences. I believe that there is always something to learn from new situations and the more we experience, the more complete human beings and professionals we become. It’s a fulfilling experience to meet new colleagues and share in their music making experience.

How many batons do you own? What’s your baton of choice and why?

Oh, good question! I probably own 7 or 8 batons. I did have a brand I loved, but the company closed about a year ago and I am currently looking for my new favorite.

I usually go for a short baton (I am short myself!) with a teardrop head and a little weight in the handle, well-balanced at the shaft.