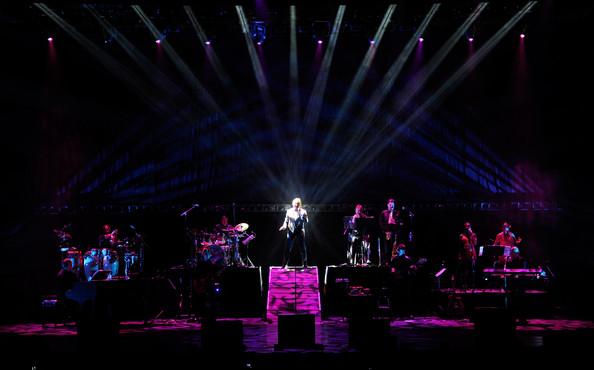 Englebert Humperdinck in a 2011 concert.

When I was first asked if I would review Engelbert Humperdinck’s concert at Ordway Center, my first reaction was that I thought he was dead.  After going to Sunday’s performance, however, I am glad to say that this octogenarian is not only alive, but possesses a singing voice that is in excellent form.  Despite his advance aged, Humperdinck provided an entertaining 95-minute set with no breaks.

For those who never heard of Humperdinck, he was born Arnold George Dorsey in India to a British army family of Welsh descent.  He later adopted the stage name of a 19th-century German opera composer (of Hansel and Gretel fame) in an attempt to stand out in the era of The Beatles, The Rolling Stones, The Who, folk rock, and hard rock.  This balladeer broke through to the No. 1 spot on the British Top 40 twice in 1967, preventing a Beatles song from reaching the top spot.

Even back in 1967, Humperdinck was an older singer – he did not make a splash on the music scene until he was 31 years’ old.  His singing style was more in the style of Jack Jones or Dean Martin, and he often performed in a tuxedo.  Although this style was considered dated by the late 1960s, his romantic ballads found  a significant audience for his many hits in the 1960s and 1970s, often among the slightly older adults who listened to pop music.

As a pre-teen, I remember watching Humperdinck’s television show that ran from 1967-70.  The show not only featured his ballads, but also a litany of now-classic singers including Dionne Warwick, Tom Jones, Jack Jones, Dusty Springfield, Lena Horne, Ray Charles, Shirley Bassey and Paul Anka.  I was aware of his biggest hit, “Release Me,” but was unaware of how many of the songs I listened to on the radio were Humperdinck’s songs until I heard the songs at the week’s concert.

Humperdinck satisfied his fans by singing his list of many hits, including his career making single “Release Me”, “After the Loving”, “ Spanish Eyes”, “There Goes my Everything”, “I’m a Better Man (For Having Loved You)”, “The Last Waltz”, and “A Man Without Love”.  As he sang, I could remember listening to these ballads on the Top 40s stations that stood out against the top rock songs of the era.

Like The Tom Jones Show, Humperdinck’s show and concerts would often provide a soft striptease with an audience of middle-aged women behaving like the screaming girls shown in The Beatles’ performance on The Ed Sullivan Show.  On Sunday, in the spirit of fun, Humperdinck performed a similar striptease by removing his jacket and unbuttoning part of his shirt to reveal a less-than-slim belly.  He also performed a spot-on imitation of Dean Martin.  Humperdinck introduced two new ballads that have been released as singles on Amazon, but they unfortunately did not have the distinctive quality of his other hits.

I tend to go to concerts with older crowds, but this was by far the oldest – with the average age appearing to be in the 70s.   There were, however, some middle-age and even younger attendees who were very familiar with Humperdinck’s song list.  It was refreshing to see someone Humperdinck’s age not only performing, but also performing in outstanding form when many artists from the same period are struggling to keep their voice.