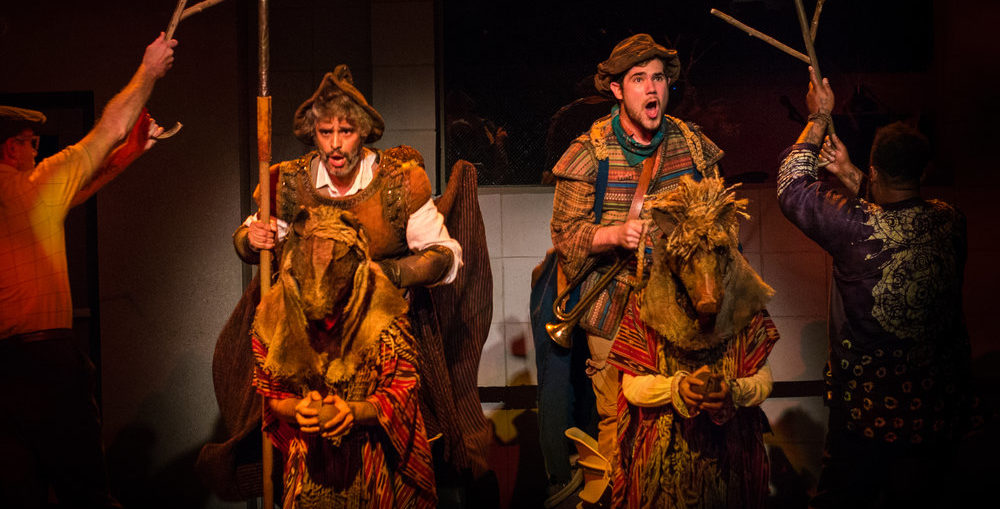 Martín Solá and Zachary Garcia ride out in the play-within-a-play in Theater Latté Da’s production of Man of La Mancha. Photo by Allen Weeks.

September is one of the busiest months for Minnesota’s professional theatres, with dozens of show openings in the Twin Cities alone. Theater Latté Da’s production of Man of La Mancha is one of these shows to open.

The show is a play within a play, with some devices that resonate with the present day in unexpected ways. It opens in a modern day detention center that could easily pass as a deportation facility. Despite the modern look, however, the play makes it clear that it is set in the 16th Century, where the prisoners are awaiting trial before the Spanish Inquisition. Cast into this facility are actor/poet Miguel de Cervantes (Martin Sola) and his stage manager (Zach Garcia).

De Cervantes is forced to defend himself in a kangaroo court before his fellow prisoners in exchange for the return of a book manuscript that is very important to him. He is accused of being “an idealist, a bad poet, and an honest man.” He pleads guilty, but launches into his defense by presenting a play in which he is plays an elderly gentlemen named Alonso Quijano. Quijano believes he is a knight-errant named Don Quixote de la Mancha. His stage manager takes the role of Quixote’s squire, Sancho Panza. Other prisoners are recruited to assume additional roles in the play, including a woman who undertakes the role of the skeptical barmaid Aldonza (Megan Kreidler).

Despite the fact that Don Quixote is obviously mad, his earnest passion is infectious. Those around him became immersed in his delusion as he strives for a better world set forth in Quixote’s defining song “The Impossible Dream”:

To dream the impossible dream;
To fight the unbeatable foe;
To bear with unbearable sorrow,
To run where the brave dare not go.

To right the unrightable wrong;
To be better far than you are;
To try when your arms are too weary
To reach the unreachable star…

These stirring words win over even the cynical Aldonza. As the legend of Don Quixote concludes, De Cervantes and the other prisoners must now decide how each will face their own looming fate.

Sola and Kreidler as the leads make this show click. Sola has a powerful singing voice and ably portrays a man who is terrified of his fate but persists in going forward on his own terms, and will not cower to bullies. Kreidler plays a jaded but strong woman from the moment the play centers on her. She does not need to say anything in her opening scene; her eyes tell all. Kreidler’s talents have been on display for years, as I noted in a 2014 review and she recently won the Ivey Award for Emerging Artist; seeing her work in this production makes it obvious why. She excels at conveying both her initial dismay with Don Quixote as well as her eventual embracing of his cause.

Standouts in the cast include Andre Shoals, who serves in the dual roles of the Governor (the judge in the kangaroo court) and the innkeeper in the Don Quixote story. Jon-Michael Reese’ facial expressions as the Padre are priceless. Other notable performances include Rudolfo Nieto in several roles, McKinnley Aitchison as the niece of the deluded Quijano, and Zach Garcia as Sancho.

Prosek conducts a talented group of musicians who are not seen on-stage, but blend in perfectly with the action and never overpower the singers. Michael Hoover’s scene design of a detention center creates an overall brooding presence while using simple set pieces to convey the images of an inn and bedroom in Don Quixote’s world.

Man of La Mancha’ s incredibly rich musical score and its uplifting message about the need for idealism should stir even the most cynical among us. Given the deeply troubled age in which we live, Theatre Latte Da’s production provides a much needed respite.

Man of La Mancha plays through October 22 at the Ritz Theater in Northeast Minneapolis.