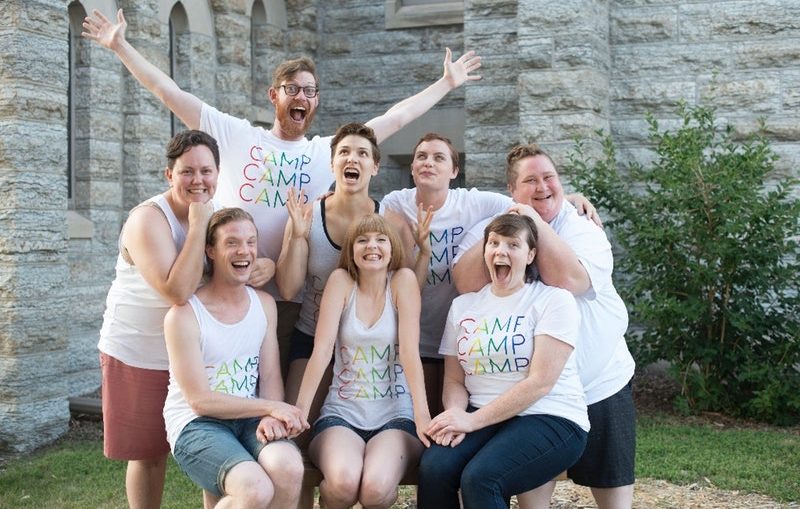 I was immediately offended when I first walked into Savage Umbrella’s Ex-Gays: Not a Str8 Remount. I’m glad that I stayed.

The reasons for my offense were two-fold: an oft-over-used Sanskrit greeting at the door that should be familiar to anyone who’s ever been in a yoga class, and a rather off-putting filk of the contemporary praise-and-worship song “Awesome God“. As a Hindi speaker and a former praise-and-worship band leader, their presence gave an instant impression that things were not right. This is actually a core part of the immersive experience of Ex-Gays, in which audience members become attendees at a summer camp focused on gay conversion therapy.

Conversion therapy, a broadly discredited technique that was once popular for trying to “rehabilitate” gay, lesbian, bisexual, and transgender people and “turn” them into functional heterosexuals, is at the heart of this play by Eric F. Avery. A central theme of the play is that conversion therapy is tremendously damaging to those involved, which it conveys very strongly. If this is a message that seems unnecessary to convey, I have this to say: if you start to Google “gay conversion therapy”, one of the top suggestions is “gay conversion therapy near me”, which is doubly disturbing because it has been disavowed by multiple professional organizations and banned in several states. So far so good.

The other thing to know about seeing Ex-Gays is that it’s roughly two-thirds comedy and one-third tragedy, often at the same time. Avery’s script is laced to the gills with innuendos in almost every line, setting audiences constantly chuckling and snickering at the most casual instruction to campers. To their credit, the ensemble cast delivers these with an earnest deadpan, and treats the occasional audience interjections and invited contributions with total aplomb that just makes the innuendo funnier. Over the course of the evening, you’ll probably develop a few favorite characters whose appearances you especially look forward to, like the unspoken essays of Shannon McCarville’s Camp Technical Director Pam and the escalating sexual tensions in, well, pretty much every scene after the opening.

What makes this play so powerful is the go-for-broke characterizations brought to life by the talented ensemble. Although this is very obviously a satire, over the course of two quickly passing hours you really do come to care for characters like Eli Purdom’s Associate Pastor Brian. In other hands, a villain might easily have emerged, but the world of the play as crafted by director Laura Leffler draws you in from start to finish.

Ex-Gays: Not a Str8 Remount plays through September 30 at Springhouse Ministry in Minneapolis, MN.