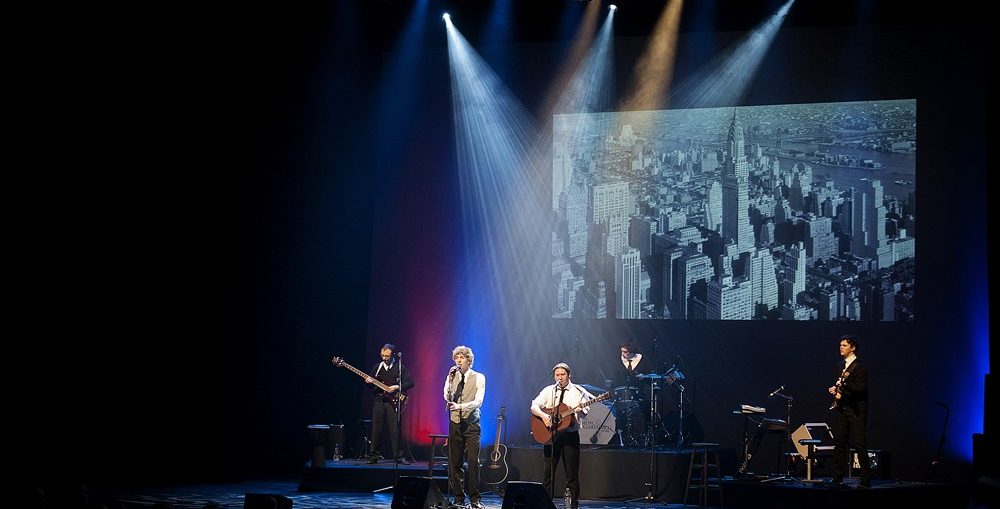 The tribute show The Simon & Garfunkel Story, which played at the Ordway Center last night, is a mixed bag of entertainment. The first half of the show is often flawed, but following intermission the performers showed a more grounded interpretation of the famous duo’s material that did it justice and touched the audience.

Taylor Bloom portrays Paul Simon and Ryan M. Hunt portrays Art Garfunkel. Both performers bear some physical resemblance to their respective singers and periodically change costumes to reflect the different phases of the duo. However, the performers act more as guides to the music, rather than impersonators. Bloom and Hunt tell us the famous duo’s story by going through their albums in a chronological order, beginning with the first album that was done under the alias of “Tom and Jerry”. The only significant tune on this album was the duo’s effective imitation of the Everly Brothers in the song “Hey Little Schoolgirl.”

The show moves on to the mid-1960s, when the duo rebranded themselves as Simon & Garfunkel with their debut album Wednesday Morning, 3 AM. This album has the non-rock version of “Sounds of Silence”, but the tribute show oddly only performed the rock version that was added a couple of years after the album’s release. The remainder of the first half consisted of songs from the duo’s albums Sounds of Silence and Parsley, Sage, Rosemary and Thyme. (I played the latter album so often when I was young that it literally broke in two.)

Boom and Hunt do not find their voice in the first half of the show. Most disappointing of all was their rendition of “Scarborough Fair/Canticle.” The meaning in this song lies not in the melodic English ballad “Scarborough Fair”, but in the interwoven lyrics of the Canticle (a version of an earlier Simon anti-war song). In the recording, these anti-war lyrics become gradually stronger until they edge out “Scarborough Fair” for just a moment with a key phrase:

Generals order their soldiers to kill

And to fight for a cause they have long ago forgotten.

The last phrase was always seen by my generation as a reference to the Vietnam War, and is a large part of what gives the song its power. The importance of these words seemed lost on the performers; despite straining my ears, I could not at all hear these words in their performance.

After the intermission, the tribute noticeably improved. The performers seem much better attuned to the duo’s material on their Bookend and Bridge over Trouble Waters albums. When singing the rhythmic tune “Cecilia”, they were rivaled by an audience member who succeeded, with great energy, in launching a polyrhythmic clapping beat that he kept up throughout the song. Standouts performances in the show’s second half included their rendition of the songs “The Boxer” and “Mrs. Robinson”. Hunt performed a very moving version of “Bridge over Trouble Waters”, although he could not do all the highest notes in the last verse.

An annoying part of the tribute was the video screen with old footage video footage primarily of the late 1950s and early 1960s. Much of it was repetitive and seemed unrelated to the songs. For example, there was repeated footage of President John Kennedy and Soviet premier Nikita Khrushchev, which was odd given that neither man was on the political scene by the time Simon & Garfunkel’s musical career was taking off. The videos appeared to be a collage of public domain video, selected without a real connection to the musical journey.

Despite the show’s flows, I enjoyed the trip down memory lane as a Simon & Garfunkel fan. For those unfamiliar with their music, this tribute is a great introduction to the duo’s rich musical legacy; I actually learned a few new things about the pair. For fans of the duo, this tribute show provides a pleasant evening of musical nostalgia.