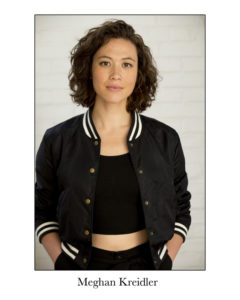 Looking back, what are some of the key experiences that have brought you to where you are today?

My experience working with Theater Mu has been fundamental in where I am today. Mu was the first theater that I worked with professionally in the Twin Cities and have continued to work with since graduating in 2013. I’ve played roles there that have come the closest to reflecting my own personal experience as an Asian-American woman, as well as roles that I wouldn’t typically be seen as at other theaters in the Twin Cities.

Because Mu has a much smaller pool of talent to draw from, they are challenged to look at casting more openly and afford Asian-American artists the opportunity to explore different roles that may live outside of their “type”. I am forever grateful to the Mu community for offering me that space to explore my versatility and for giving me visibility.

I also had the great opportunity to work as a Performing Apprentice at the Children’s Theatre Company in the 2014-15 season. I benefited so much from working among their talented acting company, learning how to take big risks and make bold choices.

Serving as a mentor to young actors [also] taught me how to be a positive role model. Doing 10 shows a week taught me a lot about stamina and how to properly care for my body and voice as instrument. I also learned so much from living in a show for a long run, how to re-invest and continually commit to growth, how to practice active listening, and opening your awareness to things that you may have never noticed.

You’re a graduate of the University of Minnesota/Guthrie Theater BFA program. Was there a particular point when you decided to pursue your acting career in the Twin Cities?

There wasn’t a particular point when I decided. I guess I opened myself up to the possibility of doing work here and I continued to be successful in booking gigs and saying yes to opportunities that came my way. I’ve had a couple of moments throughout the past 4 years where I was thinking seriously about moving to New York, but then more opportunities came my way that kept me in the Twin Cities – opportunities that I was genuinely interested in pursuing and that I really felt could contribute to my growth as an artist and as a human being.

I’m reaching another crossroads now where I’m ready to make a big change, but I’m still in the Twin Cities for awhile to fulfill some more projects that I’m passionate about. So far the path has been very good at revealing itself to me, so I trust that the decision to stay or leave will come when it’s the right time.

While enrolled in your BFA program, how did you spend your summers?

I’m trying to remember [laughs]. There were some summers that I didn’t do any theatre and just worked a normal job and enjoyed my break. My first professional show that I did was in the summer before my senior year of college; it was the same summer that I went to Korea for the first time, met family that I had never met before, and saw where my mother grew up.

The summer before my junior year I worked for Parks & Recreation in my hometown of Eagan, putting on puppet shows for little kids in the parks. I worked with two other ladies and we wrote all of the material and drove around with a giant trailer on the back of a van all summer, performing out of it.

You’re also an Actor’s Equity Association member. Some directors that I’ve interviewed advise young actors to seek as many roles as possible before joining, while others advise joining as soon as possible if you’re looking for a full-time career onstage. When did you become eligible and when did you decide to join – and why?

I was a member of the Equity Membership Candidate program, so I accumulated 50 weeks of work in Equity theaters before I joined. At that point, I felt like I had accumulated a lot of experience and I was beginning to feel like I deserved to be more valued as an actor. It isn’t that non-Equity actors don’t feel like they have value, but being a part of the Union, for me, felt the best way to advocate for myself as a valuable “commodity”, for lack of a better word.

If anything, it helped to raise my standards for myself knowing that my work and work ethic needed to be top notch in order to be considered, because the unfortunate reality is that many theaters will hire a cheaper, equally “talented” actor if they can. (That sounds gross saying it, but I do believe it is the reality).

I consider what I have to offer to be unique, so when I am hired I take very seriously the privilege of being there and the responsibility that I carry as a professional in this industry. I think when theaters and actors both hold themselves to this standard, the work is better as well.

How do you juggle schedules with your band Kiss the Tiger and your acting career? Do you wait until you’ve finished the season auditions before booking gigs, or…?

We’ve been able to book a lot of gigs after my rehearsal or performance hours, which is insane, but also incredibly fun. The reality as a musician is that you are often playing late gigs, but there have been a handful of opportunities that we’ve had to turn down because of my theatre schedule and that has been hard.

I’ve grown to really love fronting a band, and have grown from it in ways that I never could have done in the acting realm. That’s why it was especially important for me to set aside time this past summer to focus on music and take a break from anything theater-related. We ended up doing a Midwest tour and playing in New York, and we became really tight as a band from that experience, both in our playing and in our bond.

This made me realize that you have to nurture something if you want it to grow, so balancing the two passions is tough because remarkably enough I make my living from theater and that’s not the reality of the band at the moment. If I made it the focus, could it be?

I’ve always been very good at doing too many things at once, so for now it’s working – but I’ve also learned so far in my career that following passion can be extremely rewarding and that sometimes that sacrifice is worth making. So…we will see!

Your resume says that you can perform a roller-skating disco dance and crack a whip – have you been able to use these abilities onstage?

Hahaha… these skills actually come from things that I was asked to do on stage, so now I include them in my special skills. I was an avid rollerblader in my youth so the roller-skating dance was built from that skill when I did it…

I haven’t cracked a whip since I did it in this staged reading, but I think I’d be confident in re-learning it if I was ever asked to do it again.

You’ve performed in a number of shows whose original libretti had elements that are now perceived as racially problematic (e.g., Peter Pan, Flower Drum Song), and which were tweaked or rewritten with new books/librettos as a result. The results can often be quite different from what the original authors created. As an actor, do you have any particular thoughts about this sort of “updating”?

I think the updating is necessary if we are to produce these works today. There are so many works in the American canon that are incredibly dated in their portrayal of certain groups of people, and not even dated but just not accurate or genuine. It’s exciting to be a part of work that strives to meet our current cultural moment and mindset.

With that being said, I do wonder why we continue going back to problematic works. Regardless of the approach or a deeper understanding of these problems, some works just aren’t able to be “fixed”. It is my belief that we should be valuing and producing new work with new voices.

In defense of Peter Pan and Flower Drum Song, respectively, the Children’s Theatre Company’s Peter Pan rewrite didn’t aim to justify the original script, but rather re-imagined it completely so that Tiger Lily and her “tribe” were not shallow, inaccurate representations of Native people, but rather a group of human-cat hybrid girls called “The Pounce” and their warrior-like leader.

David Henry Hwang was able to rewrite the entire libretto for Flower Drum Song from the original, so much that the order of songs and their contexts within the piece were drastically different from the original. His rewrite offered multiple perspectives on being Asian in America and the realities of the first Asian-American performers and entertainers in this country.

Was the roller-skating disco dance in Stars and Stripes?

No it was actually in a show I did in the [Guthrie Theater’s] Dowling Studio my senior year called South Street, by Caron Kreitzer. It was our new play showcase, so we did all sorts of goofy/experimental things in that show. It was a portrait of a woman named Gloria Wasserman, who worked in the Fulton Fish Market [in New York City].

The rollerskating dance was an exaggerated, blown-up fantasy of something Gloria was experiencing [while] working in the market; it existed side-by-side on stage with the older Gloria and a “younger” more vibrant version of herself.

If you wanna read about that woman, there was a great article in the New York Times!

Besides making music, what are some of your hobbies that you indulge in when not doing a show?

I have pretty normal hobbies… I like drinking and socializing with friends, reading, binging Netflix, cooking, napping, writing, shopping. I do Standardized Patient work at the University of Minnesota and I do Race Workshops with Penumbra Theatre, both as a monologue artist and teaching artist. (Those are more work-related things, but since they’re more sporadic, they almost feel like hobbies.)

I [also] try to attend as many live theatre and music events as possible, but it can be hard sometimes to motivate myself when I’m usually rehearsing a show or practicing with my band 7 days a week.