The Band’s Visit is a verismo tale about intercultural dialogue, hospitality, and the search for happiness. The musical (which opened last night at the Ethel Barrymore Theatre in New York City) is intimate in focus, charming in concept, and finely balanced in execution. The Band’s Visit is one of the best new musicals of the year, gifted with a beautiful score and touching performances. 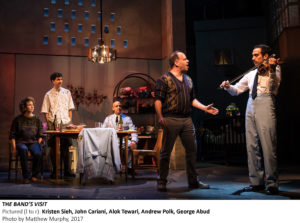 This is not The Band’s Visit‘s first trip to New York: the Atlantic Theater produced it Off-Broadway last December, selling out a 1-month limited run at the Linda Gross Theater. Since then, the script has been tightened and many of the musical numbers refined, including enriched harmonies in some songs. Most of the Off-Broadway cast returns for the Broadway incarnation, which has lost little in the translation from a 199-seat house to the Barrymore’s larger 1,058-seat house. This is not a show for the Gershwin or the Hilton, but in the more intimate space of the Barrymore it does just fine – you want to be quite close to the action and in the living rooms of Bet Hatikvah, and no seat is too far from the stage.

At first glance, the plot seems a straightforward recipe for a lighthearted comedy: a pronunciation issue strands an Egyptian police band overnight in a backwater Israeli village. The show certainly delivers on the laughs, but as things settle in a serious exploration of life bubbles up. The script and performances deftly capture the awkwardness of intercultural collisions and the touching moments that often arise along the way. In this respect, The Band’s Visit goes against the grain: much of Broadway focuses on exceptionalism and exceptional individuals. Instead, The Band’s Visit explores ordinary humanity – who, it turns out, can be plenty interesting in musical form. By the time the show comes to an end (it runs 95 minutes with no intermission), you care about a surprising number of characters.

The basis of the musical is a 2007 Israeli film of the same name, smoothly adapted to the stage by playwright Itamar Moses and featuring a whole series of engaging songs by David Yazbek. Tazbek’s songs are tinged with the Egyptian folk music, klezmer, and Israeli pop, arising smoothly from the scenes and slipping back into them. One of the show’s best songs, “Welcome to Nowhere”, comes early and features Katrina Lenk as café owner Dina. The thrumming song skewers the band’s unplanned rest stop with acerbic wit. “Build a road to the middle of the desert,” Dina/Lenk sings. “Pour cement on the spot in the desert / that’s Bet Hatikvah.” 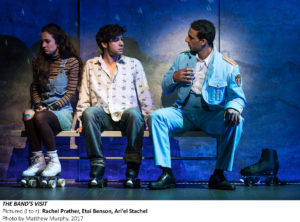 Papi (Etai Benson) is another surprise in this small little village in the middle of the desert. In most shows, he would be just a background caricature, perhaps gifted with a smart parting one-liner to make us reconsider what we’ve thought in the arc of the show. Here he gets a hilarious song (“Papi Hears the Ocean”) about his insecurity around the opposite sex, which leads to the funny and touching follow-up scene and song “Haled’s Song About Love” (performed by Ari’el Stachel, playing the trumpeter Haled). These two songs and the scenes are how we truly get to know these characters – not in a bombastic, “Here’s my revelation” sort of way like “Defying Gravity” or the wry commentary of Beautiful, but in the slow unwrapping of their inner, private personas.

There is much to recommend about the performances. Lenk’s stage presence captures the eye in each scene, and her portrayal of Dina grounds much of the story as we get to know both the band and their hosts. Much of the narrative follows Dina’s interactions with Tewfiq (Tony Shalhoub), the band’s director, as they cautiously unthaw over the course of an evening; the end of their story recalls life’s poignancies better than a dozen stage romances.

An inventive, turntable-driven set by Scott Pask and slick direction by David Cromer slide the action smoothly from episode to episode and group to group. A theme of the musical is “all is not as it seems”, as what could easily be caricatures become fleshed out over the evening. So it is when we meet the unhappily wedded Itzik (John Cariani) and Iris (Kristen Sieh); that some of these stories lack a neat resolution at the musical’s end is half of what makes it so compelling. Instead we get moments – more than vignettes, but not quite tied with a bow – about people whose lives in many ways are more interesting than the “rich” and “famous”. This is a show about ordinary people responding to circumstances; their stories will surprise you, including how much you come to love them. 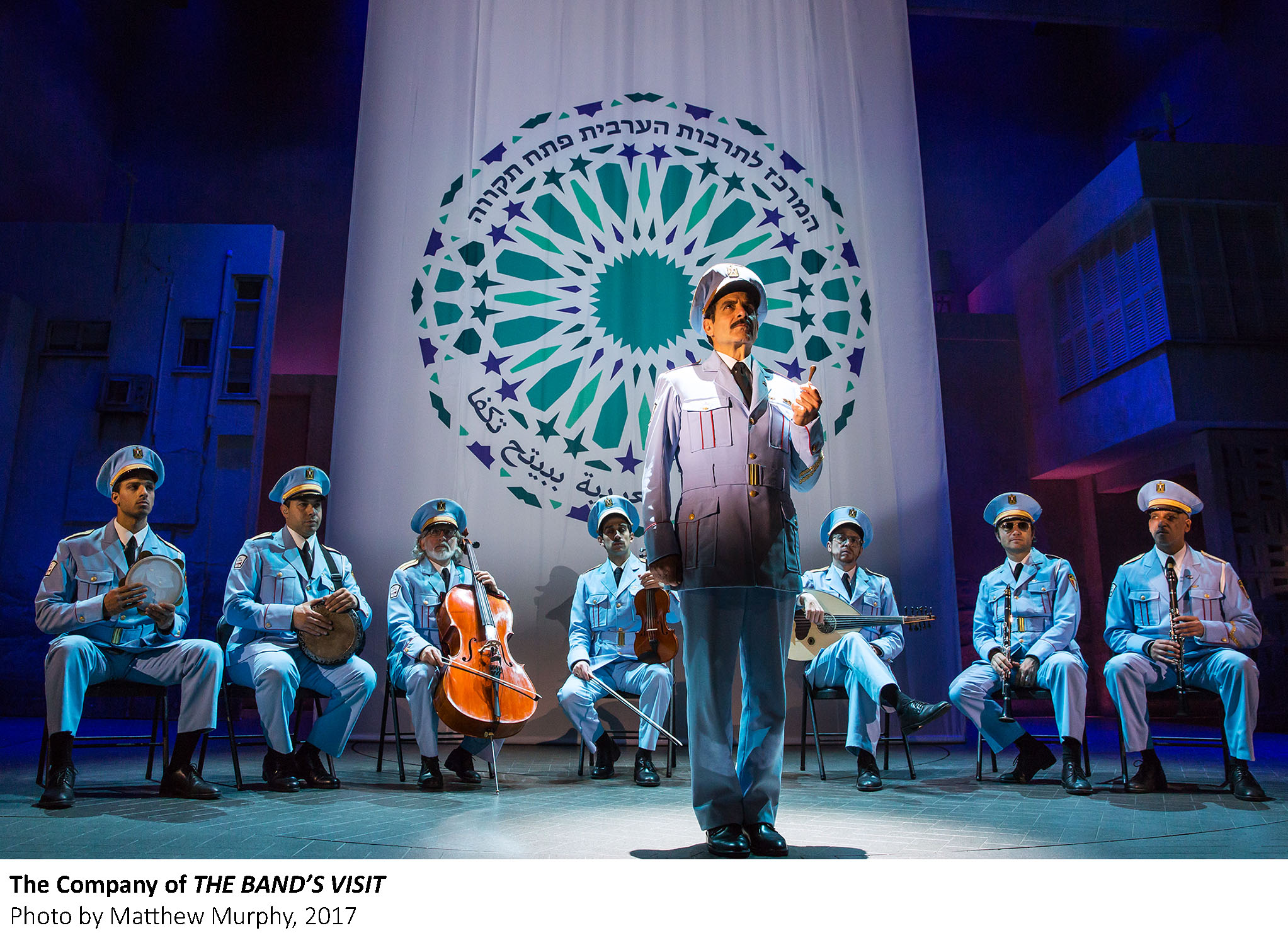 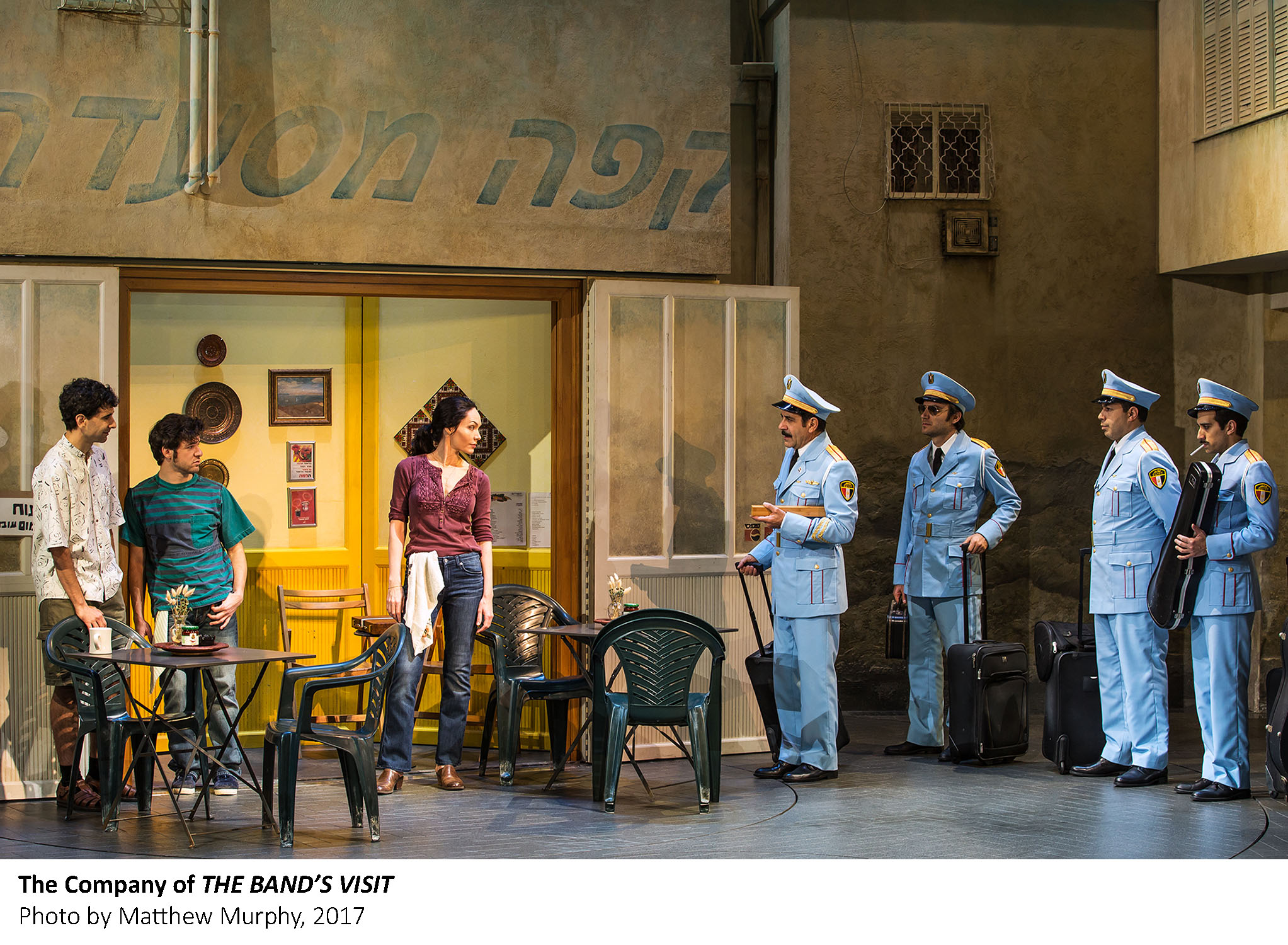 The Band’s Visit is now playing at the Ethel Barrymore Theatre in New York, NY.