Phillipa Soo, Renee Elise Goldsberry, and Jasmine Cephas Jones in the original Broadway cast of Hamilton – one of 12 shows coming in the Hennepin Theatre Trust’s next season.

The Hennepin Theatre Trust announced today its 2018-2019 Bank of America Broadway season. The new season will feature a mix of 12 new and classic musicals, spearheaded by the much-anticipated megamusical Hamilton.

Season subscribers will receive a package of tickets to 8 shows: Hamilton, A Bronx Tale, Charlie and the Chocolate Factory, Hello, Dolly!, On Your Feet, The Play That Goes Wrong, Dear Evan Hanson, and Fiddler on the Roof. The four “season options” falling outside of the main package are four returning tours: Beautiful – The Carole King Musical, The Book of Mormon, Les Miserables, and Rock of Ages.

Season subscribers receive a number of benefits including discounted tickets (vs. single ticket purchases), seat guarantees (for returning subscribers), and advanced purchasing – a major factor with shows such as Hamilton that are expected to sell out throughout their Minneapolis runs. Season subscriptions go on sale to the public on Wednesday, Feb. 14 at 10 am, and can be purchased in person at the State Theatre Box Office in downtown Minneapolis, online at HennepinTheatreTrust.org or by phone at (800)859-7469.

Kicking off the new season will be Lin-Manuel Miranda’s megahit Hamilton, arguably the most culturally resonant show to hit Broadway in recent memory. This sung and rapped musical about Founding Father Alexander Hamilton opened Off Broadway in February 2015, selling out its run and transferring to Broadway in August of that year. It won 11 Tony Awards, a Grammy, and the Pulitzer Prize for Drama, and has been one of the most expensive and hard-to-see shows on Broadway ever since.

Demand for Hamilton has been so great that the show has spawned several satellites: a long-running Chicago production of the show that has been running since 2016, a national tour that launched in 2017 and has been running strong since, and a second and parallel national tour kicking off this year. One of those national tours will land in Minneapolis on August 29 and play through October 6, a stay of 39 calendar days. 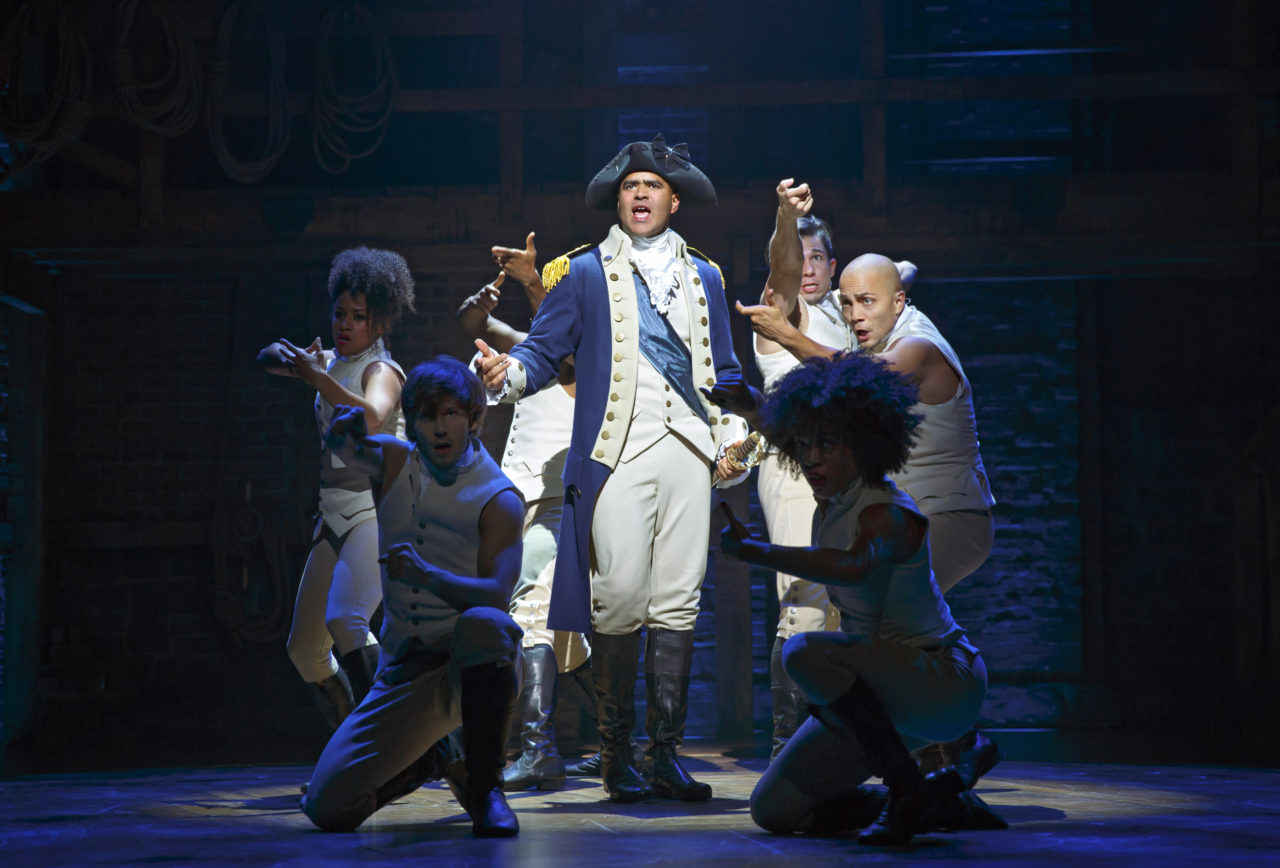 Christopher Jackson as George Washington in the Broadway production of Hamilton.

Beautiful – The Carol King Musical will return October 22 for a one-week run. The biographical musical about one of America’s most successful and celebrated songwriters delighted Twin Cities audiences during its 2015 visit. Oct. 22-27.

The irreverent and hilarious comedy The Book of Mormon also returns November 6-18. A now perennial favorite, the musical by South Park creators Trey Parker and Matt Stone – and Robert Lopez – puts a wholly different spin on baptisms as mediums for seductive and flirtatious songs.

If last December’s Phantom of the Opera was a blast from 1980s megamusicals past, this December’s will offer more of the same – with barricades. Les Misérables will play in Minneapolis from December 18-30, 2018, bringing Victor Hugo’s classic back to dream of dreams of times gone by.

After a January break for snowbirds, the Bank of America Broadway season picks up again in February with the 1980s glam rock and metal musical throwback Rock of Ages. This jukebox musical features songs by Styx, Journey, Bon Jovi, Pat Benatar, Twisted Sister, Steve Perry, Poison, and others, and will play February 8-10, 2019.

A break for Valentine’s later, A Bronx Tale pops down on the stoop with to musically explore a different vein of breakups: a split between family and organized crime. This doo-wop musical is set in NYC’s Bronx neighborhood in the 1960s, and features a young man caught between filial piety and the glamour of the mob. Throw in some Molotov cocktails and forbidden romance and you’re in for a rollercoaster of a ride. The show opened on Broadway in December 2016, and plays in Minneapolis from February 19-24, 2019. Its devoted fans called foul when the show wan’t nominated in the last Tony Awards cycle.

For a sweet slice of childhood, see Roald Dahl’s Charlie and the Chocolate Factory. There are several different musical adaptations of the beloved children’s novel; this one mixes songs from the most beloved film adaptation (“Pure Imagination,” “The Candy Man”, and “I’ve Got a Golden Ticket”) into a vibrant and high-energy new score by part of the writing team from Hairspray. March 6-17, 2019.

April showers don’t necessarily breed flowers in the Minnesota climate, but they will bring Hello, Dolly! bursting into bloom. This classic musical about young love and a consummate matchmaker features songs like “Put on Your Sunday Clothes” and “It Only Takes a Moment”, and will play on Hennepin Ave for two weeks. April 16-28, 2019.

For something different, try the music of Gloria and Emilio Estefan in On Your Feet! This jukebox musical thrums with energy and a Latin-tinged pop flair, filled with dance anthems and swinging moves. Jan. 22-27, 2019.

The Play That Goes Wrong is an outright farce. The Cornley Polytechnic Drama Society sets out to perform its latest overly ambitious production, The Murder at Haversham Manor, only for things to go wonderfully, terribly, hilariously wrong. A hit on both sides of the Atlantic. May 7-12, 2019.

Dear Evan Hansen tells the story of a high school boy struggling with social anxiety disorder. A tragic event and a quick fib turn into a spiraling web of lies and growing angst, with a script by Steven Levenson and a stunning score by Benj Pasek and Justin Paul. May 28-June 9, 2019.

Some musicals need little introduction, and the final show in HTT’s 2018-2019 season is one of those: Fiddler on the Roof. This classic tale of tradition meeting change and family colliding with love features classic songs like “If I Were a Rich Man” and “Sunrise, Sunset”. July 30-Aug. 4, 2019.