You are here
Home > Arts > INTERVIEW: May Lee-Yang on <em>The Korean Drama Addict’s Guide to Losing Your Virginity</em> 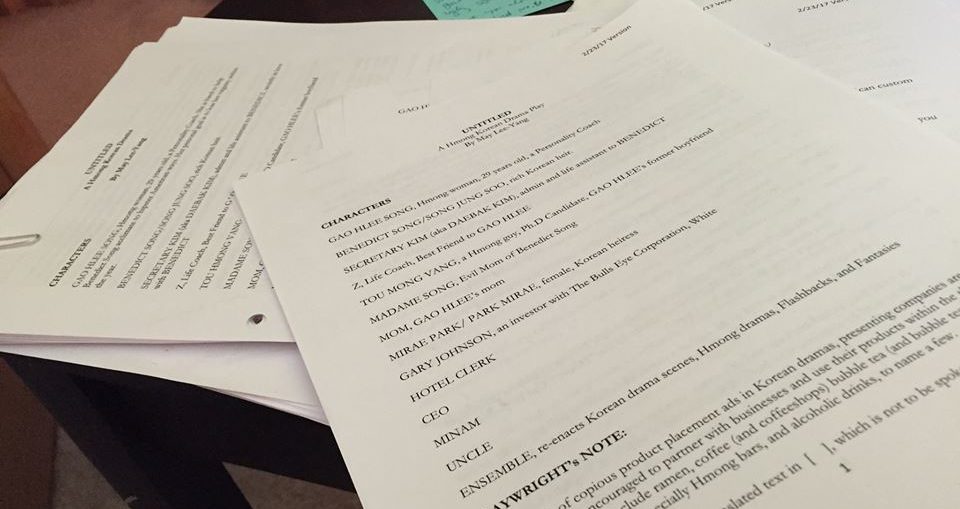 A scattering of papers from May Lee-Yang’s forthcoming play The Korean Drama Addict’s Guide to Losing Your Virginity.

This upcoming comedy, written by May Lee-Yang is a co-production with Mu Performing Arts/Theatre Mu. It plays with the tropes and stereotypes of Korean television dramas – a massively popular body of soap operas with a burgeoning international fanbase.

She’s a Hmong personality coach addicted to Korean Dramas (soap operas with fantasy plot lines). He’s the heir to a Korean manufacturing giant banished to the new Midwest office. Will she find a man before the magic hour of her 30th birthday? Will he buck tradition and embrace his musical dreams? Fantasy collides with reality in this romantic comedy about fate, cultural clashes, and the art of losing one’s virginity.

The Arts Reader‘s Basil Considine sat down with playwright May Lee-Yang to talk about her career, writing process, and The Korean Drama Addict’s Guide to Losing Your Virginity.

The concept definitely came first. For several years now, I wanted to write a play about Dramaland (which is what I’m referring to the Korean Drama Universe) but had to figure out what the actual story would be.

The title was challenging for me. I experimented with playing off other K-drama titles, but thought those titles would only be appreciated by fans. I landed on the current title purely as a way to create accessibility.

I first heard about Korean dramas in the early 2000s. Many friends and family members watched them, but I always made fun of those folks. In 2012, my life changed drastically. I went from from having no kids to fostering four kids, which meant I was home a lot. To kill time, I started watching Korean dramas – which became a form of escapism and self-care.

K-dramas have also had a huge global impact. I read somewhere that the largest kdrama watchers are from Iran and South America. K-dramas are so popular in China that, in 2016, the Chinese government banned Korean TV shows because the Chinese population was consuming too much of it. One woman even purportedly had a miscarriage because she was binge-watching a 16-episode drama.

In spite of this, the Chinese government broke their Korean drama band to allow the airing of Scarlet Heart Ryeo. Now, even Netflix is getting in on the action through buying exclusive airing rights to some dramas and even commissioning some original ones.

Theater Mu has a commitment to producing work that will tell Asian American stories and be part of the American canon. As part of this initiative, they commissioned me (through a Jerome grant) to write this piece.

The partnership with Park Square Theatre makes a lot of sense to me. This play has my own Hmong twist to the genre and since many Hmong people live in the St. Paul, the Park Square Theater space will make the show much more accessible.

This process has been a bit of a luxury. Because of the Jerome Foundation funding, I knew the play would have a life beyond just readings. I’ve had several workshop and staged readings of the piece with a variety of actors, dramaturgs, and K-drama experts that have helped the piece to really grow. This process has been anything but me working in isolation.

This play is definitely a rom-com but there’s also a supernatural element, and one of the biggest things that evolved from the workshop process is understanding how the supernatural world functions on the stage: Are spirits implied? Are they manifested physically? How do the characters in the play deal with spirits?

I’ve been fortunate to work with folks who are generous in the workshop process. Sometimes it’s about trying out lines: Did a joke land? Was some dialogue too clunky?

Sometimes, the generosity came in sharing knowledge. For example, some of the actors I worked with had actually lived in South Korea and offered some feedback about phrases and mannerisms.

I’m terribly undisciplined. I write when there is a deadline, which is why scheduled workshops, readings, and final performances have helped to birth this piece.

Essentially, I like to work in concentrated amounts of time rather than, say, writing steadily every day.

I have been on residencies in the past, but I’m not a huge fan of residencies because the application process feels like extra work: applying, waiting, and shuffling my schedule. I prefer certainty, which is why I do writing retreats that are anywhere from 2-4 days in length. I do several of these a year, and this process – being gone for a few days versus a few weeks or even months – is a much more accessible approach for my lifestyle.

One of the things that make successful writing [for me] is having a to-do list. It’s easy to put aside time to write, but that might mean sitting in front of a blank screen for hours. It’s helpful to have a list of things – questions to resolve, scenarios to play with, scenes to look over – so that each writing day is productive.

Even writing a scenario that gets thrown out is useful because at least you’ve explored that avenue. I also like to keep myself inspired through reading other works, seeing shows, going to the gallery, talking to other people.

I like funky things, which is probably why I really enjoyed Elizabeth Meriwether’s Heddatron, which is a robotic take on Hedda Gabbler. George C. Wolfe’s The Colored Museum also influenced a lot of my early writing.

Essentially, I like theater that is quirky and provides commentary about the world around us.

Promotion is part of my artistic life. Some people hate it or choose not to do it, but I don’t have the luxury to do nothing.

Early in my career, it was clear that organizations weren’t sure how to promote my show…who was my audience? Could my shows sell tickets? I had to build an audience, and now promotion, audience engagement, and curating experiences around a show have become a part of my process.

I care about diversifying audiences, accessibility, and deeper engagement beyond being a passive audience member. One of the challenges I’ve faced, however, is that I’m not good about submitting to opportunities. I instinctively focus on generating new work, but I plan to strategically use this year to give my work a life beyond a debut.