You are here
Home > Arts > INTERVIEW: Laila Robins on <em>The Children</em> and Returning to the Twin Cities 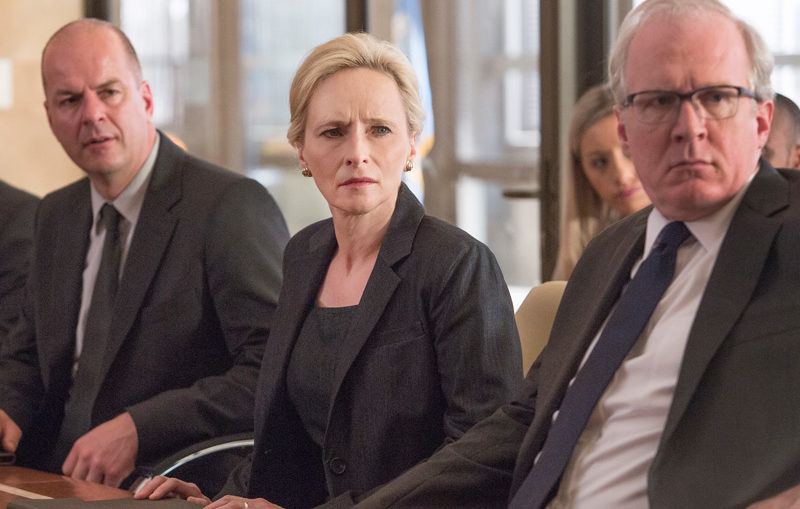 On January 12, the Jungle Theater kicks off the year with a nuclear disaster. No, not a nuclear family disaster around the holidays – that’s between you and your family – but the aftermath of a disaster at a nuclear power plant in Lucy Kirkwood’s The Children.

A nuclear disaster might sound like high stakes to start with, but in The Children it’s both the historical backdrop and, audiences come to realize, a key aspect of the plot. This tightly constructed drama, which premiered in London in 2016 and premiered on Broadway last year, is laced with menace. Casey Stangl directs the play’s regional premiere at the Jungle, which is brought to life by three actors well-known to local audiences: Stephen Yoakam, Linda Kelsey, and Laila Robins.

Laila Robins? Laila Robins from Homeland and Handmaid’s Tale? The queen in the Guthrie’s production of The Lion in Winter? Yes, that Laila Robins. Robins, a St. Paul native, returns to the Twin Cities for another taste of winter and to bring to life this Tony Award-nominated play. Robins spoke with the Arts Reader’s Basil Considine about her diverse acting career and

You’ve done a lot of stage, film, and TV work over the years. Do you find acting for the stage intrinsically different than acting for the camera?  How similar or different is your preparation process for each?

Yes, over the last 5 years my TV work has picked up a bit with Homeland, Murder in the First, and Deception. I recently had a guest spot on the very popular Handmaid’s Tale. With film and TV, much of your preparation is done alone; there is very little rehearsal. You may have about 20 minutes to discuss, block, and work out the scene. You have to go in having made strong choices, whereas in the theatre you have the luxury of playing around a bit and trying different things every day in rehearsal and into the run of the show.

A performance in the theatre can keep growing and be quite different by the end of a run. I also find that how much you externalize a thought or feeling depends on the size of the lens the camera is using. If it is an extreme close up, you can do very little and still project your thought. Just having the thought is often enough.

You’re a St. Paul native and did a number of shows at the Guthrie back in the early 2000s. Have you spent much time in the Twin Cities in the intervening years?

Yes, I have had the pleasure of working at the Guthrie many times, most recently in The Lion In Winter, and have always enjoyed my time there. It is the theatre I grew up on, and it will always have a very special place in my heart. I still have family here and have returned to visit them about 4 times a year, and I always see a play when I do.

Where is home base for you these days?

My home base is New York. I have lived here since I finished my Masters at Yale. I did spend about a year and half in 1990-91 doing my first series regular role on Gabriel’s Fire with James Earl Jones, but came back because I love the theater so much. I also spent about three months in LA doing Murder in the First a few years back. Always happy to go to LA, but NY is my home.

Lucy Kirkwood is something of a household name in the UK, but less known on this side of the Atlantic before The Children headed to Broadway. How did you first encounter Kirkwood’s work?

I was not aware of Lucy Kirkwood before this play. She is a young woman in her early thirties and I found it quite extraordinary that she could write roles for more mature actors so accurately and sensitively. I was very impressed with that. I look forward to her next endeavor.

What was the process that brought you back (or brings you back) to the Twin Cities to perform at the Jungle? Are there certain regions that you target in auditions or ask your agent to look out for opportunities in?

I saw The Children on Broadway last year and took note that it might be a play I would like to do in the future. I found it very compelling.

I had met and worked with the director Casey Stangl at the Ojai Playwrights Conference two years ago and she mentioned that she was directing the play at the Jungle Theater in Minneapolis. I have always enjoyed seeing plays at the Jungle when I’ve been in town, and at one point had the opportunity to meet Sarah Rasmussen and float the idea of working there someday. I find their choice of plays very interesting and I love the physical space, the intimacy, and even the quirky and colorful lobby.

Because of family ties, I tend to look for theatre work here. I am focused on film and TV at the moment, but if I find an opportunity to be with my family and do a great play, nothing could be better. I also really love the Minnesota audiences. I find them curious and willing and enthusiastic.

What’s a recent play or musical that you’ve seen and particularly enjoyed? Why?

I so enjoyed Edward Albee’s Three Tall Women with Glenda Jackson recently and look forward to her Lear this year. She is a goddess. Her talent and stamina are remarkable. That is the beauty of this profession. One can continue to work well after retirement age if one wishes to.

Do you have anything local (e.g., activities, restaurants, etc.) that you’re looking forward to doing in the Twin Cities?

My time in the Twin Cities will be filled with rehearsal and the gym and family. Perhaps I’ll find myself at one of the fine restaurants here. There is always something new popping up. It is the holiday season, so I’d love to attend a concert of sacred music and a visit to the Walker Art Museum would be nice as well. I also hope to take in some of the other theatre going on about town. It is always such fun to see old friends. But mostly I’ll be learning lines!!!

What goes into your travel kit when you do a show out of town, especially in the winter? Do you travel with a humidifier or similar paraphernalia?

When I travel, I always take my yoga mat and some meditation CDs. Also: ear plugs and a good frying pan.

What’s next for you after The Children?

I just finished an episode of The Handmaid’s Tale and would be delighted if the role became a recurring one. The show is written and acted and shot so beautifully. I am very honored to be a part of it.

[After that,] we shall see what happens; often, an actor has no idea what is coming next. We spend much of our time looking for and pursuing work, but I have been very fortunate.

The Children runs about 110 minutes with no intermission. It also has something of slow-burn plot (something for which Kirkwood is justly famous for) before things start erupting. Skipping intermission and plowing straight through from start to end have become more popular in recent years, especially in shows like The Band’s Visit. What are some of the opportunities and challenges of this uninterrupted engagement with the audience?

I love the intermission-less play. I enjoy engaging the audience and taking them for the ride in an uninterrupted fashion. With Shakespeare, it is always nice to have a bit of a break as the plays are long – but with many new plays, building to the climax with no respite for the actor is great and can be quite powerful for the audience. And then, of course, afterwards, there is time for dinner and conversation about the play!

The Children plays at the Jungle Theater in Minneapolis, MN from January 12-February 10, 2019.