You are here
Home > Arts > INTERVIEW: Becca Hart on Jungles, Spoonfulls of Sugar, and Returning to the Wolfpack

The cast of the Jungle Theater’s 2018 and 2019 productions of The Wolves. Photo by Dan Norman.

The Jungle Theater’s hit 2018 production of Sarah DeLappe’s The Wolves is coming howling back in 2019. In a bit of sleight of hand, however, the January 31-February 17 revival jumps from the company’s longtime home in Uptown Minneapolis to the Southern Theater in Cedar-Riverside. In a way, it’s just keeping wolves away from The Children – opening January 12 – which seems a sensible action.)

The story of The Wolves follows a high school girls soccer team across a season, giving glimpses into their private worlds through the window of their warmups. One intrusion aside, there are no adults in the room; no names, just player numbers. DeLappe’s script not only garnered the American Playwriting Foundation’s Relentless Award, but was also named a finalist for the 2017 Pulitzer Prize for Drama. The Jungle’s artistic director Sarah Rasmussen directed the Jungle’s 2018 production and its revival, which unusually reunites the whole original cast and creative team.

The Arts Reader‘s Basil Considine spoke with Becca Hart, who returns to The Wolves as Player #7, about rejoining the wolf pack and being practically perfect. 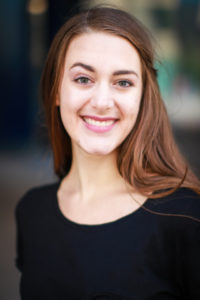 You’ve played a very wide assortment of roles in 2018. What were some of the high points?

The Wolves at the Jungle Theater was a particularly singular experience in my career thus far, as it was a cast and crew made up entirely of women. I’d never been in a room like that and was always aware that such an atmosphere is a rare occurrence, in any profession! I felt both proud and completely at home every day of that process – absolutely a high point.

Playing Ms. Mary Poppins at Artistry was, of course, a dream and a half. I loved seeing all those faces light up, from ages 1 to 92.

Once you’ve become practically perfect, the sky’s the limit, right? If you were given the opportunity to pick one musical theatre song to sing with an orchestra in concert, what are some of the songs that would be near the top of your list and why?

Ooh, anything I want? I’d love to sing “To Build a Home” from The Bridges of Madison County – the orchestration is so haunting and it’s so interesting to have a show start with something akin to a soliloquy. Speaking of which, let’s then do “Soliloquy” from Carousel and have our magical orchestra transpose it for a soprano range. Talk about a showstopper of a song!

What are some of the things that you look forward to in returning to The Wolves?

I’m so thrilled to bring the play back for more audiences. I know there are people who didn’t get to see it the first time who are already waiting to get tickets. I also know many people who are excited to see it for a second or third time! When a script and a cast can keep you coming back for more, you know you’ve got something exciting.

Many audience members and critics who saw The Wolves in its earlier run remarked on how powerful the narrative was, in part because how it diverges from “traditional” theatre stories about women. What are some of the things that you enjoy about playing Player #7?

I love that, while #7 isn’t the portrait of a “traditional” young woman, she’s someone that everyone recognizes – she’s that scary popular girl, the one who’s super unapproachable; you find yourself both intimidated by and in awe of her.

I can vividly remember the #7s at my school. Getting to play her feels like understanding those girls more. I get to find where their toughness leans towards loyalty or pain or bravery.

A lot of female-only or female-dominated shows in the area in recent years have developed their own sisterhood rituals (e.g., the cast of Sister Act at Chanhassen Dinner Theatres). Did you develop any special rituals or friendships during the first run of the show?

Our soccer practices are rituals, for sure! As for friendships, any time a member of The Wolves sees another member of The Wolves, it’s an event. One of those quiet events where your heart simply floods with that deep, easy joy of seeing someone you know, love, and trust. That’s gushy, but true.

The Wolves aside, what are some favorite new plays or musicals? Why?

Favorite new ones? I love shows that engulf you in their world, especially the weird worlds. Natasha, Pierre, & The Great Comet of 1812; Matilda; and Fun Home are my latest new favorites. I have to listen to The Band’s Visit – I hear it doesn’t sound like anything else.

As for plays, I love anything I haven’t seen before, especially if it’s odd and physical at Transatlantic Love Affair, Frank Theatre, Four Humors Theater, or The Moving Company. Put it up and let me buy a ticket!

You’re from Tulsa, Oklahoma and a St. Olaf College graduate. Do you remember what first put Minnesota on your radar?

Minnesota was always on my radar, actually. My family is from St. Paul and we’d come up every winter and summer for a few weeks. I loved it here. When I was looking at colleges, I liked St. Olaf’s music studies, their English program, and the fact that I could do theater without being a major. When I visited the campus and learned that it often smelled like cookies, I was sold.

It wasn’t until after I graduated and moved to the Twin Cities proper that I realized how big of a theatre hub we were – again, I was sold. I feel very lucky to have found this (not-so-hidden) gem of a community.

What else is on your theatre docket for 2019?

I’ll be in Sisters of Peace at the History Theatre in St. Paul, with some phenomenal people. We’re telling the story of the four McDonald Sisters (they’re my new heroes). Then, I’m back at the Jungle for Small Mouth Sounds, which promises to be just my kind of crazy. I can’t wait!