You are here
Home > Arts > INTERVIEW: David Cote and Adapting a Children’s Classic The Scarlet Ibis 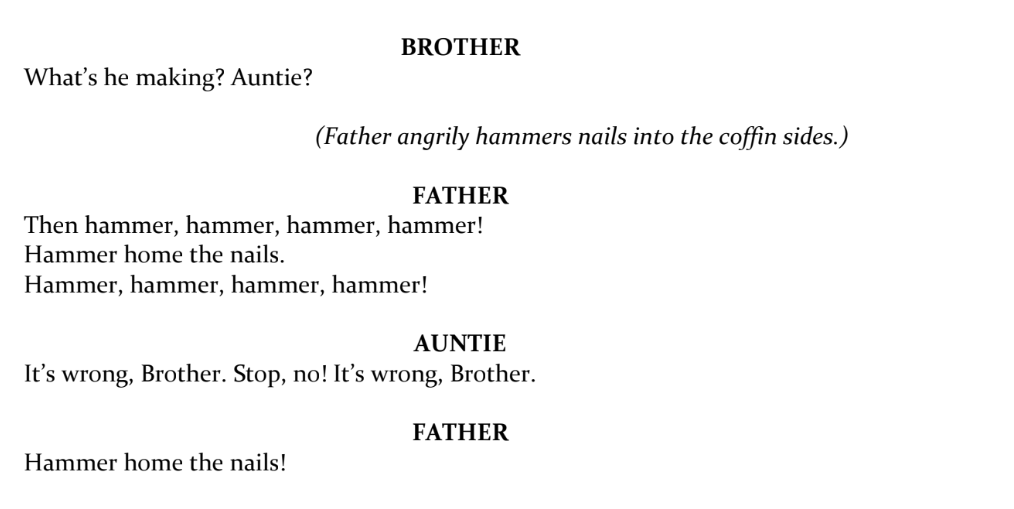 A page from the libretto of David Cote and Stefan Weisman’s opera The Scarlet Ibis, which opens Thursday in Cambridge, MA in a production by Boston Opera Collaborative.

January may be a frigid stormy time in much of the United States, but it’s a florid time for new opera in the Northeast. Hot on the heels of New York City’s PROTOTYPE Festival of new music-theatre pieces, Boston Opera Collaborative is preparing to open its production of The Scarlet Ibis by David Cote and Stefan Weisman. This adaptation of a popular 1960 short story by James Hurst is a staple of many Minnesotan English curricula, taught in high schools from Rochester to Farmington to Mankato.

A tragic story of childhood and illness, The Scarlet Ibis has long-fascinated readers. The operatic adaptation by Cote and Weisman first appeared at the 2015 PROTOTYPE Festival, and this year will be staged by both Boston Opera Collaborative and Chicago Opera Theater. Basil Considine spoke with librettist David Cote about adapting The Scarlet Ibis for the stage and walking the line between theatre criticism and opera writing.

How did your partnership first conceive of adapting James Hurst’s The Scarlet Ibis as an opera?

It was Stefan Weisman’s idea, originally. I’d gone to Bard College and always admired Stefan’s music – he introduced me to composers like Shostakovich and Alfred Garrievich Schnittke, and I always wanted to work with him. Our first opera, Fade, was a 25-minute, 1-act work commissioned by a London company called Second Movement in 2008. Together, we applied for a residency program at HERE Artists Residency Program. When we were starting that, the PROTOTYPE festival was just starting up.

Stefan had read the story in an anthology as a kid; he showed it to me, and I thought it had all the qualities to make a touching story for diverse audiences. It was a natural fit.

Marketing a new opera to producers often feels like a full-time job even after the premiere. What has the journey been like?

For any new American opera to get a 2nd production seems magical – you either need to sign a contract with the devil or sacrifice two goats to your god. A lot of new operas get their premiere and are done; opera companies are often just obsessed with world premieres.

We had a great premiere in 2015, great reviews, audiences were crazy, but it took a while to find its audience after that – to find a company that was looking for something for younger and adult audiences that wasn’t talking down to kids. Now, Chicago Opera Theatre and Boston Opera Collaborative have taken it, and it’s an opportunity to see how it will flourish under different directors, whether or not they use puppets, etc…to see if the opera has “good bones”.

As The Scarlet Ibis heads into another production, how has the piece changed or evolved?

When the piece premiered, we were very happy with the work. We might have added a line to the libretto at the end to emphasize to add a little clarity – I think Stefan wrote some ossia [alternate notes] in the vocal line for the mezzo and the countertenor to accommodate different ranges and different singers – but otherwise, no real changes.

No major cuts or trimming of scenes?

Some operas premiere and need extensive rewritings or cuttings, but I’m happy to report with The Scarlet Ibis we set out to make it as well-constructed as possible, so that others could slip into it as a well-constructed machine.

You write in several genres, including criticism, playwriting, and opera. How does that feed into your writing?

For nearly 20 years, I’ve been a theatre critic – first for Time Out New York, and later for other outlets in the city. I’ve also written for Opera News and written many reviews of new musicals, but I’m not an opera critic – I don’t have the knowledge of vocal performance to be an opera/music critic. I’m a words guy, a drama guy. I approach libretto writing the same way that I approach playwriting, with an emphasis on character and action. Obviously, libretti need to be more evocative and spare than usual playwriting.

What are some of your favorite recent operas?

The new American opera that really inspired me more than a decade ago was The Difficulty Crossing a Field by David Lang and Mac Wellman…beautiful and ghostly. It’s not the type of work I normally do – I’m in the naturalistic camp – but the marriage of evocative poetry and music is very powerful.

Among the classics, I like well-made operas, like those by Verdi, Opera, Puccini, and Mozart. They created good operas for a reason, and I like narrative and story in opera.

At this year’s PROTOTYPE festival, I hope to see the opera p r i s m, which sounds really exciting. And 4:48 Psychosis, which is based on a play by a British playwright, Sarah Kane, who died in 1999. I’m also going to try and make it to Washington National Opera to see a new opera called Taking Up Serpents; I hope to work with that composer, Kamala Sankaram, in the future.

What’s on your creative radar next?

I’m working with other composers and companies. This July, I’m premiering a piece called Blind Injustice with Cincinnati Opera. It’s based on a true stories of conviction and exoneration, in association with the Ohio Innocence Project. There’s a lot of verbatim text in the libretto from interviews that I did with people, but I’ve also invented text.

Given a blank slate commission, what sort(s) of works would you like to write?

I have folders of ideas. Stefan and I would love to do an opera inspired by the 19th century Utopian movement in America – those crazy communes experimenting, and to watch the progress from beginning to end and find the humor and pathos in the setting.

Stefan and I are also developing an opera called American Atheist about Madalyn Murray O’Hair, the founder of the American Atheist movement, who was murdered. I like to think of her as a larger-than-life Falstaff. We’re writing it now – two scenes written – but we want an opera company to commission the larger work. It’s hard to write a whole opera without guarantee of being paid…the ideal is to be commissioned to write it, to find an atheist billionaire to support it.

What are some of the opportunities and challenges that you see in American opera today?

There’s a lot of exciting things now, with a lot of chamber opera; one of the challenges is to see how companies can commission new, large-scale grand opera. It’s great to do chamber opera, but the challenge is to fill a large space with a piece of American history. Those operas can be written, it just needs someone with vision to program them.

There have, of course, been new operas about the Civil War and slavery, including one at NYC Opera some years ago, and Philip Glass had one. To me, the big operatic subject for American opera in terms of historical period and large scale seems to be the Civil War. But there is also the Gold Rush, as Peter Sellers and John Adams did in Girls of the Golden West…the colonization of this continent, and abolition. Some contemporary subjects like The (R)evolution of Steve Jobs exploring technology, too.

For myself, I’m interested in religion, cults, and the underside of the American story: cults, religion gone bad, utopian societies – both in the 19th century and contemporary.

As someone who grew up in the 70s and 80s, I’m also very interested in science fiction and space exploration…

Well, do you simply take a novel or movie that’s well-known, like 2001, or a famous novel like Ray Bradbury’s The Martian Chronicles and make an opera about that…or just create an original story?

I’d like to do an original story about a female astronaut – not Gravity – set in a new outpost, where she’s there for like 9 months or something. What would the other voices be? People with her? People in her head? That would be more a monodrama.

The Martian would be perfect – do the sounds of spaces. Or do you do an opera about the Apollo 11 moon landing…so many ways to go.

Do you have a particular “home style” when writing opera libretti?

I think I adapt to the subject matter. I like to have humor, even in something that’s really intense and has foreboding. (I try to organically source humor, to have it arise out of the situation.) I want my characters to be very well-rounded, not mouthpieces for the composer or cardboard cutouts, and to have psychological depth.

I also try to have the stories move, to have dramatic pacing. Many librettists have said that your job is to stay out of the way of the composer, so I try to practice concision. When the composers let me, I like to rhyme – but you can’t rhyme all the time, because it gets ridiculous. (Stephen Sondheim is also a huge influence.) If there’s room for me to explore song lyrics in the opera, it’s a great opportunity for me to explore wordplay, assonance, that sort of thing.

I’m a playwright who also does opera libretti. I could say that every librettist is a failed playwright. (laughs)

There’s no one way to “be” a librettist, and no one way to “write” a libretto, but a librettist can potentially be the least talented person in the room – they shouldn’t be, but a mediocre libretto can’t ruin a good composer. The librettist can put down gibberish and a good composer can make it seem beautiful and make people cry. That banal stuff at the right time can be beautiful is crazy stuff.

How do you compartmentalize your writing as a critic and an opera librettist?

Professionally, I don’t write about the companies that produce or might produce my work. I’m not reporting on the Met or Chicago Opera Theatre – just working with them as an artist. Same as a playwright – I keep them separate because they need to be.

Being an artist and a critic is a tricky dance, because if I’m reviewing a work at a theatre, I want to do it free from consideration about my own work. If any company says, “I would produce their work, but they’re a critic,” fair’s fair, and I can’t say anything about that. As an editor and journalist, that’s a good thing…I can edit myself, I love deadlines, and I believe in the editing process. Very little stuff that I write is perfect the first time out; you have to kill your darlings and move on. The more people in the room working on it, the more intelligent it gets.