You are here
Home > Arts > INTERVIEW: Caroline Bowman and Austin Colby on Playing Frozen Royalty and Returning to the Stage

Caroline Bowman stars as Princess Elsa in the North American tour of the musical Frozen, which opens September 30 at the Orpheum Theatre in Minneapolis, MN. Photo by Deen van Meer.

On January 28, 2014, a bitter cold wind blew down Hennepin Avenue. For the last few days, a winter storm had driven the mercury so low in the Minneapolis-St. Paul area that Fairbanks, Alaska was 25 degrees warmer. Then came the wind gusts of up to 60 miles per hour, driving the apparent temperature down to -50 °F.

For actor Caroline Bowman, then walking to the Orpheum Theatre to star in the Broadway tour of Evita, it was a new level of being frozen. In retrospect, that was probably good training for the the role that now brings her back to the Twin Cities: starring as Princess Elsa in Frozen: The Musical.

Royalty, onstage or not, rarely travels alone. In Caroline’s case, she is joined on tour by her husband Austin Colby (who plays Hans), and their German Shepherd Kodak (not starring in this show). Caroline and Austin spoke with the Arts Reader’s Basil Considine on returning to the icebox and the stage.

Where am I catching you?

Caroline: We are in Buffalo, New York, where we relaunched the Frozen tour.

It’s been a much longer time off-stage than usual for many actors. The press has, ahem, gotten in hot water for some of its “Can they do it?” speculation on what it’s like for full-time actors to head back to the stage after an extended time off. Professional athletes usually don’t run a marathon right after a long break, but you dove right back into things. How did you feel when rehearsals resumed?

Caroline: More than ready! We’ve been waiting for this the last 18 months. Austin and I hit the ground running, and it’s been the most energizing experience. I wake up every day excited to do the show.

Austin: It’s been really nice coming back to the material – there’s a certain amount of muscle memory that you realize you still have.

Knowing we were coming back to Frozen and knowing the demands of the show, Caroline and I took care of our bodies. We feel like athletes doing this, and fortunately, what we were doing at home during the pandemic worked.

Caroline: And we’re also offering ourselves grace about where our bodies and minds are after 18 months. We’re different people than the first time around, and we’re acknowledging it.

Austin: And we’re stronger, because our bodies survived the pandemic! 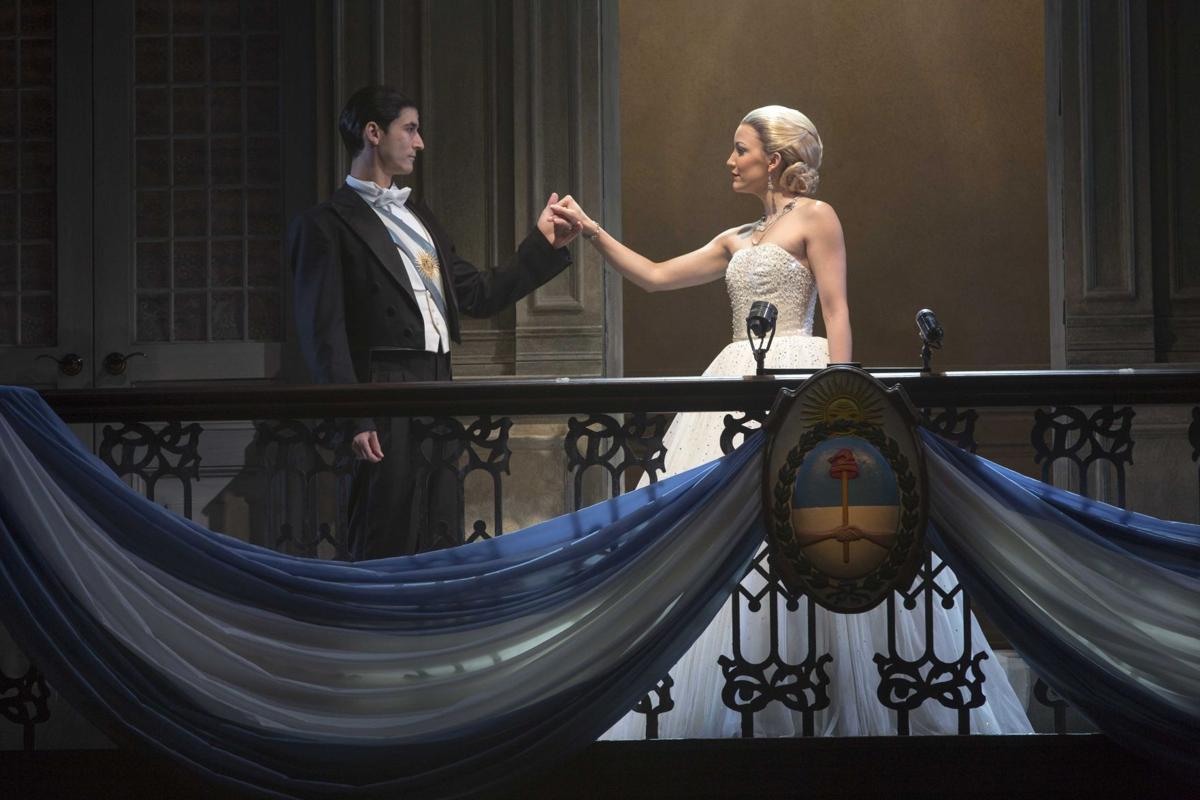 There was a great deal of rescheduling – false stops and starts – in the theatre world as it slowly became apparent that this pandemic would not be over in a few months. What was that like on your end?

Caroline: Our return-to-world date moved 4-5 times. We were starting to get a bit numb, and starting to protect our hearts when we had meetings. I think we found out about the restart this fall in May or June, and still kept asking if they were sure. We didn’t want to make plans and get attached to that idea, because we’d just get our hearts broken! In the end, we had the summer to get ready again.

Have you performed in the Twin Cities before? I should warn you that our weather is a little cooler than most states, even in September…

Caroline: Yes! I’m so excited to come back to Minneapolis – I was in the tour of Evita some years ago [in January 2014] and I remember my boogers freezing when I walked to the theatre!

Many people have reinvented themselves or taken the pandemic pauses to do something different. Have the two of you picked up any interesting hobbies, skills, or pets during the pandemic?

Caroline: I’d never used Zoom before – that was new for both of us! I was using Zoom in some capacity nearly every day: for performing, or teaching voice lessons and master classes. We got some new equipment to do voice overs and learned new technical skills. (I’m not the greatest at that, but we had to adapt!)

We already had a puppy – a 3-year-old German Shepherd named Kodak, who started the tour when he was 1.

Austin and I also moved in with our parents at the start of the pandemic, and had to learn to live with parents as an adult married couple…those skills are pretty valuable!

Austin: I’ve always been into fitness, so I got certified as a personal trainer during the pandemic. I did it with a castmate of mine; we both had an interest in fitness, and were talking about it, and decided to just go ahead and study together and be accountability partners. We both passed the exam and are now PT-certified…it’s a great skill to have: being smart and using our bodies every day for our job.

Does your German Shepherd go on tour with you, or stay with family while you’re on the road.

Austin: Kodak (our dog) was maybe 6 months old when we got the job. He is family! There was no question about whether he was coming, only about how he was coming.

Most people on tour travel by plane, but he’s a 90-pound German shepherd…unless he goes under the plane (which we’re not a huge fan of), he can’t do that. So we bought a Subaru Ascent SUV and he lounges in the back seat, and we got an overhead storage compartment that he uses for his bed and his own luggage (he has a lot).

Caroline: Having a dog also makes us feel like we’re all at home: a little more settled, a little more stability. You get home, and you take him on a walk…

Is he the only dog in tour? I could see that spoiling a dog for life!

Caroline: A lot of the cast got dogs! There are 9 or so dogs on tour, and one of them is his best friend and they see each other every day…

So you got cast as a princess in Frozen, proceeded to get a private car (with Austin as your chauffeur), got a cute puppy, and then the rest of the cast started imitating you?

What is a favorite moment in the show?

Caroline: It’s so hard to pick one! There’s some incredible technical elements, that are so magical to see unfolding right before your eyes.

One of my favorite moments in the show is at the end, when I bring Anna back to life after she’s frozen – it’s so incredible what the ensemble does with their bodies to look frozen, and then adding the technical elements on top of that. It’s miraculous…such a beautiful amalgamation of what Disney can do with magic on stage and what artists can do to bring that to life. It makes me tear up on stage!

Austin: There’s amazing direction and choreography incorporating the ensemble so beautifully into the story, so they become part of the ice and snow storm, the freeze, and the thaw…I don’t think they could have assembled a better ensemble. It’s live theatre at its best: you almost forget that underneath those costumes are living beings.

My favorite moment every night is that I get to watch from the wings and see Caroline sing “Let It Go” – kind of a new anthem of all ages. People reach out to Caroline all the time at the stage door and on social media about how much impact the song has had on their life and helped them grow and heal. As her husband, it’s tremendous to watch her perform the song with such ease and grace, and see this appreciated and celebrated in the moment…

As theatre actors, we’re offering up a service and gift to the audience. I think of bows as the audience thanking us for the performance, and us getting to thank them for joining us and coming back to theatre. That one live performance you see only happens exactly that way once, and only the people in the room get a chance to experience together. There’s nothing more magical than that.

Frozen plays September 30-October 20 at the Orpheum Theatre in Minneapolis.