You are here
Home > Arts > INTERVIEW: Three Questions with the Writers Behind <em>The Realish Housewives of Edina</em> 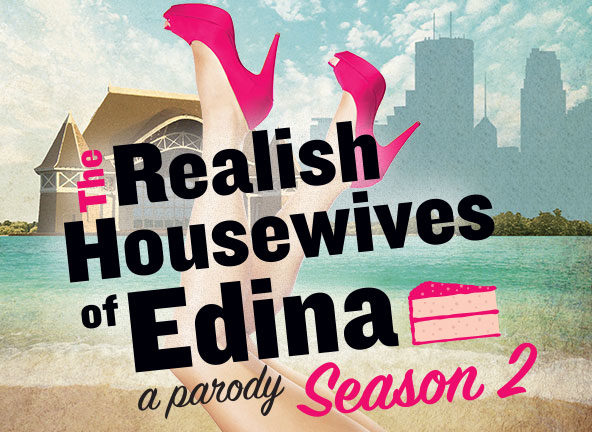 The Realish Housewives of Edina, Season 2 is currently playing at the New Century Theatre in Minneapolis. The show, the sequel to last year’s hit Season 1, spawned a national tour of localized productions skewering affluent suburbs around the country. The show was penned by Kate James and Tim Sniffen, a Chicago-based team that also writes for Second City. The pair chatted with the Arts Reader‘s Basil Considine to discuss their work on this series.

What inspired you to write a parody of the Real Housewives series?

KJ: I’m a huge fan of the series and am fascinated by how many people I know that are either secret fans or very loud and proud of their Real Housewives obsession. Tim and I figured fans might enjoy a live experience that brings the same drama as the TV series. The TV show is so over-the-top, with huge highs and lows – which is perfect for comedy. And then you add the local Edina customization aspect and improvisation elements and the audience has a chance to become part of the show.

TS: I was new to the series when we began the project; I think I was there in part to help represent any audience members encountering the Housewives phenomenon for the first time, so we didn’t get so inside-baseball that people felt left out. But I quickly grew to share Kate’s outlook that “people taking themselves this seriously, in such ridiculous circumstances… are begging to be satirized.”

Last year saw a Realish Housewives tour, complete with localization for each destination. What was your involvement in this process? Which begat which?

KJ: Tim and I wrote the original show with the goal of a national tour. We were thrilled when Hennepin Theatre Trust agreed to be the first city to feature the show. The run in Minneapolis allowed us to try the show in front of an audience and continue to hone the material before it went out on the road. We are so grateful to the cast and crew at Hennepin Theatre Trust (and the audiences who came to see it) for helping make the national tour what it was.

TS: Yes! Minneapolis was our first (and still the one we think about late at night). We learned what worked and what didn’t with our run here. The cast and staff at Hennepin were also instrumental in helping us with the local aspects, so local details in the show rang true.

What’s next for you as writers? Are we going to see more (mis-)adventures from this crew of housewives?

KJ: As we continue to work on other projects, we will always say yes to writing more for these outrageous characters. And based on the success of the TV shows, we know that there are endless ridiculous situations for these ladies. We’ll see if the public demands more!

TS: Given the chance, I would write a new Housewives of Edina every year (with the occasional holiday special to boot). The moment this sequel was green-lit, our thought process wasn’t “What should we include?” — but “How many of these ideas can we cram into one show?” And believe me, not everything made it in! We have a list for [fingers crossed] Season Three!