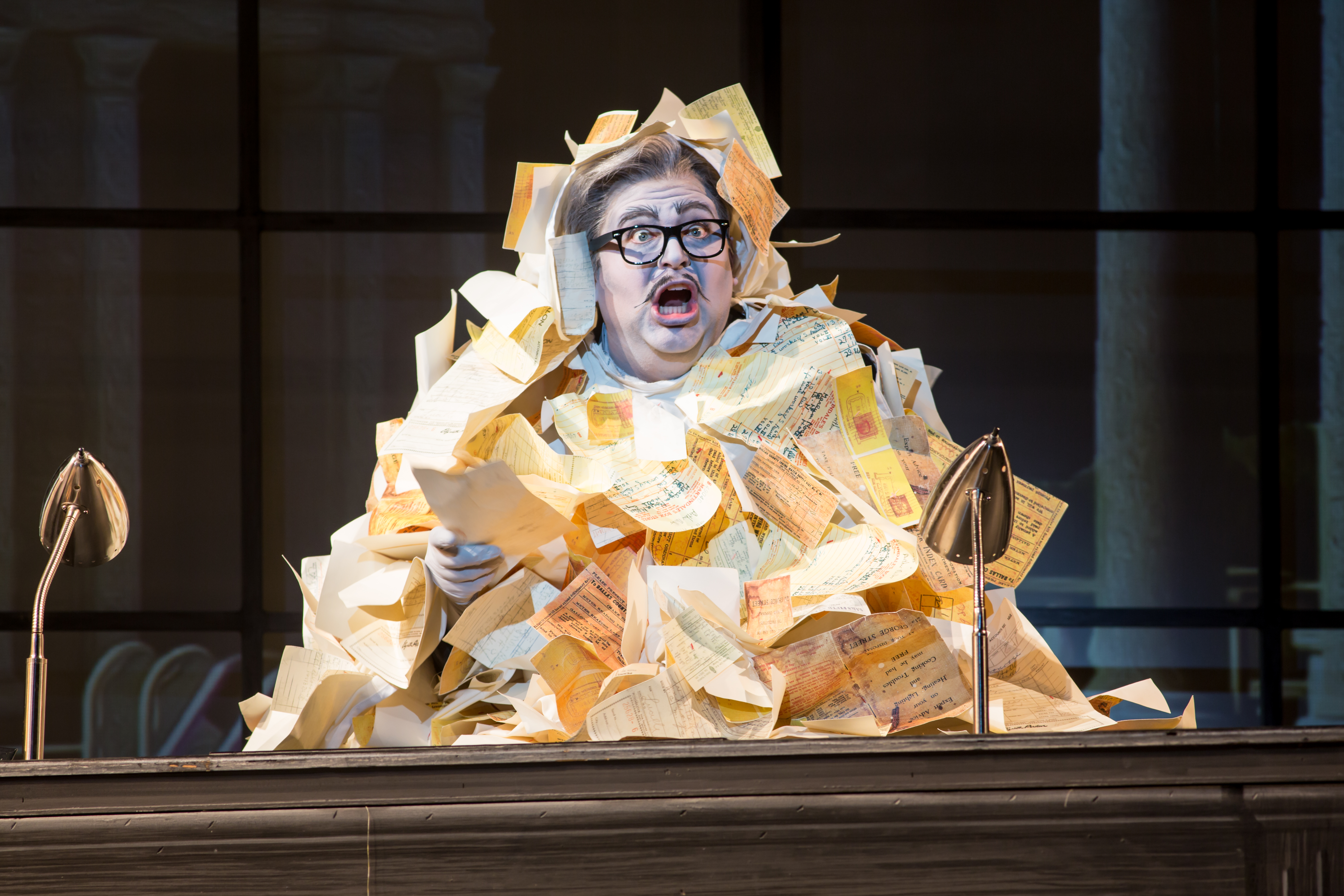 Minnesota Opera’s production of Don Pasquale, currently playing at the Ordway Center for the Performing Arts, is suffused with all the lovely music that you’ve come to know and expect, well-performed and a joy to hear. The updated setting of Don Pasquale as a washed-up silent film star works brilliantly in the interwoven silent film and newsreel segments that set the stage for the much of the comedy that follows. Where the staging by Chuck Hudson stumbles is in the inconsistent tone – sometimes, the production tries to be farce; sometimes, an absurdity; and others, it ends up an unintended tragedy.

The normal heart of this opera involves Don Pasquale being taught a tongue-in-cheek lesson about prejudging and overly miserly behavior. If you get the balance right, the opera’s a good-natured hoot from start to finish, with Pasquale earnestly realizing that he’s better off not complicating his own bachelor life. In this production, the Don (Craig Colclough) actually seems to be reasonably frugal, given his lack of income; having Norina (Susannah Biller) practically flush his money down the drain and physically assault him comes across as elder abuse. This is a disservice to the opera and to the performers, and ultimately distracting from what should be outrageous comedy throughout.

The updated supertitles cause another set of problems with tone. The updated texts projected over the stage suit the 1950s setting, but in many places blatantly ignore the onstage choreography and gestures, which often only make sense if you understand the actual Italian lyrics being sung. As with many things, consistency is key. (While we’re at it, it would be strongly beneficial to use supertitles throughout each song – there’s a lot of clever lyrical interlocking in the ensemble pieces that is completely lost when repeated texts are not shown.)

The pit orchestra is conducted by Jonathan Brandini, making his formal staff debut with Minnesota Opera after graduating from the company’s Resident Artist program. As with his earlier conducting for Tosca, Brandini displays a nuanced grasp of the genre, mining small moments and accents to highlight the humor infusing the score.

Some of the best moments in Don Pasquale involve short gags of physical humor, like the scene-stealing Notary (Wm. Clay Thompson)’s spastic background action. As the garden scene moves towards its climax, the first few minutes of Malatesta (Andrew Wilkowske)’s flailing in a Dracula cloak is hilarious; the latter minutes, however, stretch the gag to the point of absurdity. The same can be said for much of the physical humor, with gags simply playing too long and outstaying their welcome. A staged “encore” would likely land better either with a non-Minnesotan audience (we don’t “do” audience participation as a general rule) or by simply doing without the awkward preliminaries that send Colclough, Wilkowske, and the supertitles to try and rouse the confused audience.

This is not a perfect performance of Don Pasquale. The 1950s setting has its moments, however, and you’re guaranteed some great performances. It’s not every night that you get to hear Susannah Biller sing such a beautiful rendition of “So anch’io la virtù magica”, David Walton’s Ernesto’s heartfelt and moving “Cercherò lontana terra”, and to hear Colclough and Wilkowske sing the “Cheti, cheti, immantinente” duet twice.

Don Pasquale plays through October 15 at the Ordway Center for the Performing Arts in St. Paul, MN.