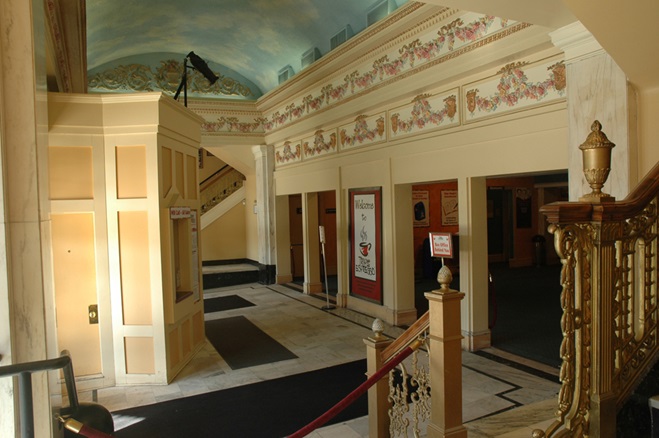 Is your company looking for a 400-seat theatre in Minneapolis? Can you pull off a $2 million fundraising drive? Were you alternately planning on buying a mansion on the shores of Lake of the Isles but would secretly like to have your bed onstage, like in the film Stage Beauty? If your answer to any of these questions was yes, you might just be thrilled to learn that the Music Box Theatre at 1407 Nicollet Avenue South in Minneapolis is for sale.

Minneapolis has had a number of interesting theatre conversions in recent years, with the most recent project resulting in the acclaimed Lynlake Brewery in Uptown. Currently, the Music Box is hosting a seasonal revival of Triple Espresso, which ran in a continuous run from 1996-2008 before closing and returning seasonally. Operating as a live theatre and concert venue, however, is just one of the theatre’s many identities over the years.

The Music Box Theatre originally opened as the Loring Theatre (Loring Theater in some sources; the “-re” spelling is used in the Minneapolis City Council minutes of the time) in 1920, as a hybrid theatre designed for film showings and vaudeville. It was designed by the Minneapolis-based architectural firm of Kees and Colburn, whose work included many notable mansions and theatres in the area; 2008 Pleasant Ave South and 1712 Mount Curve Ave in Minneapolis are two well-preserved examples. (1712 Mount Curve is also currently for sale, albeit at a much dearer $3.2 million.) Frederic Kees’ earlier partnership with Frank B. Long produced many of the most distinctive turn-of-the-century buildings still extant in Minneapolis, including the City Hall and County Courthouse (1899-1905), the Flour Exchange Building (1892,1902), and the Masonic Temple (1888 – now the Hennepin Center for the Arts), according to a range of styles including the Chicago School and Richardsonian Romanesque. What would become the Music Box was built in a more conservative Classical Revival style.

At its opening, the Loring Theatre featured an orchestra pit, house orchestra, and pipe organ that allowed silent film audiences to enjoy live soundtracks well before the Minnesota Orchestra hit on its The Nightmare Before Christmas concert scheme. The theatre was well-poised to take advantage of a surge of development in Loring Park fueled by the expansion of street car lines; it was, among other things, an easy stop for commuters heading home on the #4, #5, and #14 lines. To keep the theatre fashionable, the arrival of “talkie” films with recorded dialogue was accompanied with a 1930 redecoration in the then-hip Art Deco style by Liebenberg and Kaplan, another team that designed many historic theatres in the Twin Cities.

The sudden and controversial closure of the streetcar system in Minneapolis in 1954 – several people went to jail and a local gangster was involved, with other highlights such as working streetcars being burned to recover scrap metal – was a terminal blow to the Loring Theatre’s original audience, which had its commute massively disrupted at the same time as affordable television offered an increasingly compelling alternative. With the post-war rise in automobile ownership, the trifecta was complete; theatres like the Loring had been built before patron parking was a major concern, and couldn’t offer this necessity. The Loring Theatre shut in 1955, but soon reopened under new ownership and to capitalize on a new trend.

The new owner of the Loring was the Evangelical Association, a religious group that rode the new television medium straight into television evangelism. (The famous televangelist couple Jim and Tammy Faye Bakker, then still students at North Central College, had their wedding there in 1961 before going on to found and host the highly influential television show The PTL Club.) After televangelism passed its heydays in the 1970s, the aging building’s utility to the Evangelical Association declined, and in 1985 the Cricket Theatre purchased the space so that it could move from the Hennepin Center for the Arts into its own home.

The Cricket Theatre company undertook drastic renovations over the next year, walling off the theatre balcony to create a much more intimate 216-seat space, and adopting the name of The Music Box Theatre (evoking in part the famous theatres of the same name in Chicago, Los Angeles, and New York City). These changes did not stop the building from being declared a Minneapolis Historical Landmark by the Heritage Preservation Commission and the City of Minneapolis in 1990. After a decade of producing and maintaining its space, however, the pressures took its toll on the company, and in 1996 Cricket embarked on its final season. One of the final works to be programmed was Triple Espresso, a surprise megahit that ran for 12 years – quite the feat, considering that Cricket itself no longer existed in 1997, and even more so in that it became an international franchise. When Triple Espresso ceased being the sole tenant in 2008, the building’s owners cast about for a new management team to operate the space.

The period spanning 2008-2010 was not kind to many artistic organizations around the United States, and the first management team soon did not return. An association by the name of The Directors, LLP then leased the Music Box Theatre in 2009, renaming it the Loring Theater the following year; a renovation transformed the space into the sort of Victorian music hall that it is today, with similarly varied programming. The eclectic programming was not up to the financial demands of the space, however, and by the end of 2011 the group ceased to operate. The name of the space reverted to the Music Box Theatre, and after a few years of various commercial bookings the theatre is more or less the same today.

The Music Box Theatre is being offered for sale through Colliers International. The complete sales flyer can be
viewed online.