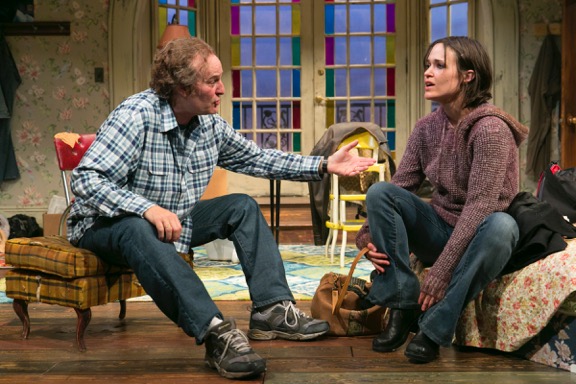 There’s a surprising amount of violence in The Night Alive, Conor McPherson’s new play at the Jungle Theater, given that the piece is fundamentally a situational comedy. A bit of a black comedy at times, yes, but the show having a body count matching Sister Act is just one of the unexpected things about it. (Those of you who don’t know Sister Act, yes, that was a spoiler.)

The Night Alive will not answer season ticket holders’ curiosity about how Sarah Rasmussen’s taking the helm will change this Lynlake institution. What it does provide is a pleasant evening watching a whole series of characters with big flaws and rough edges muddle their way through life in contemporary Dublin. Shakespeare this is not, but the characters have an imminent presence that is very compelling, both because of the material and its delivery. A feature of Joel Stass’ direction is that the action doesn’t rush; speeding through this or creating too slick a progression would have been antithetical to the material. This is a play in which uncomfortable pauses (for the characters, not the audiences) are essential, and in an age of telescoped, rushing treatments is very welcome.

The Jungle’s billing of this show advertises Stephen Yoakam as the headliner; this is not inaccurate in practice. Tommy (Yoakam) is the central pivot on which this story turns, and Yoakam’s portrayal of a man with more heart than polish is just as hard to look away from as his turn last year as Iago in Othello.