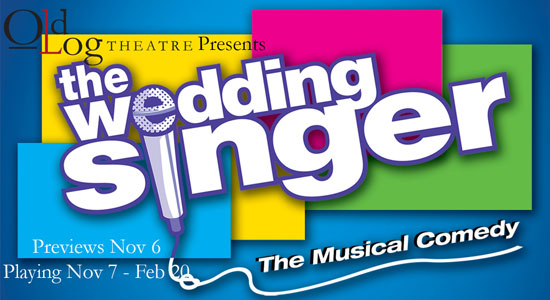 The Adam Sandler/Drew Barrymore film The Wedding Singer was a surprise hit in 1998. Its stage adaptation landed on Broadway in 2006 and was less so, running for just 284 performances – quite respectable 40 years ago, but much less than stellar with current Broadway economics. The show was hailed as generally appealing, but ultimately derivative and slightly bland. The not at all bland staging of The Wedding Singer at the Old Log suggests that the Broadway version’s director simply didn’t have things calibrated right.

Under Kent Knutson’s direction, the Old Log’s The Wedding Singer is an up-close-and-personal trip down retro lane, with flashy dance production numbers and delightfully excessive song deliveries. This show shines from being up close: the Broadway production took place in the Al Hirschfeld Theatre, which was far too large at 1,424 seats; the Old Log’s 560 is about right. Things get off to a bang with a lively staging of “It’s Your Wedding Day,” and don’t let up too much until intermission. The cast is amiable, the sensitive numbers touching, and if the plot doesn’t exactly break new ground it still has a lot of sweet and fun moments, like a cutely literal duet called “Get Out of the Dumpster.”

The ostensible lead, Eric Morris, takes center stage at the top of the show as the eponymous wedding singer Robbie Hart. Morris is charismatic and sings well, but quickly has to share the spotlight with some equally talented costars. Elizabeth Anderson (Julia Sullivan) is alluring to listen to and watch, and Philip C. Matthews (Glen Guglia) starts out the second act with a bang with an engaging, powerhouse delivery of “All About the Green.” The rest of the cast is not bad and the dancing is superb; you might just want to stay for drinks after to chat about the show.