You are here
Home > Arts > The Real Captain Von Trapp 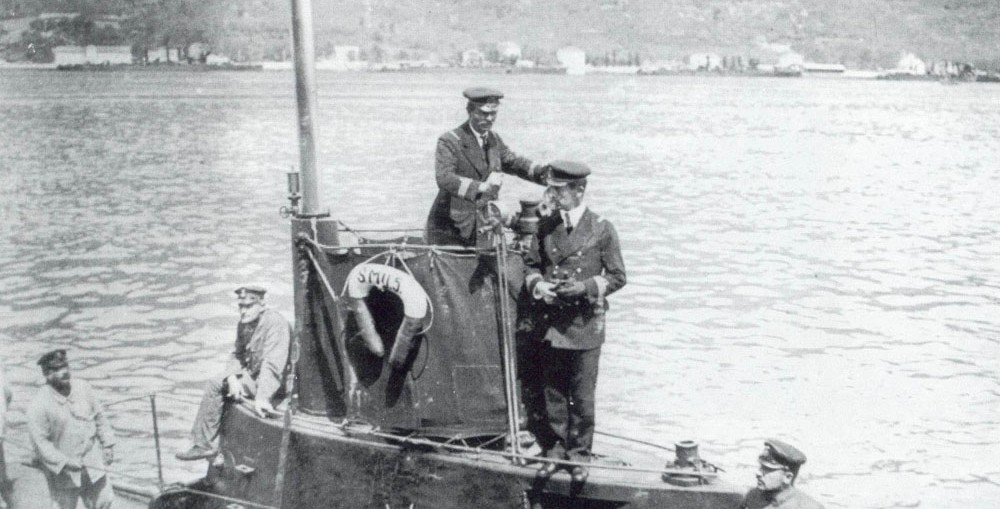 Captain Georg Johannes, Ritter von Trapp on the conning tower of the Austrian submarine U-5.

Today, the Twin Cities Arts Reader looks at the story behind The Sound of Music, which opens at the Ordway Center for the Performing Arts one week from today. This dramatization of the real-life von Trapp family’s adventures and flight from Nazi-occupied Austria has delighted millions since its November 16, 1959 premiere and the iconic 1965 feature film adaptation starring Julie Andrews. At the Ordway, the movie has been the subject of multiple singalong screenings, whereas the stage show itself is regularly one of the most-requested write-in requests from subscribers. This popularity has created some interesting life-imitates-art collisions, with the Rogers and Hammerstein song “Edelweiss” now being performed for tourists in Austria and by the current generation of the Trapp Family Singers; most tourists are convinced that it is an authentic Austrian folk song, rather than a musical theatre piece.

As fun as as The Sound of Music is, the actual, real-life story of the von Trapps is even more fascinating, and a sense of the history greatly expands one’s appreciation of the musical. In the stage show, the von Trapps are invited to sing at an amateur performance festival; in real life, the Salzburg Festival that they sang at was (and remains) one of the most prestigious music festivals in Europe, to which only elite musicians were invited. The Trapp Family Singers were well-known in Austria before their emigration, with the family members performing professionally to support themselves after the family fortune was lost in the Great Depression.

The nature of The Sound of Music has focused a great deal of attention on Maria von Trapp, who in real life was certainly worth that attention. The character of Captain von Trapp, however, was arguably the more interesting and famous of the two characters when the musical premiered. Captain Georg Johannes, Ritter von Trapp was one of the Austrian navy’s most decorated officers in the First World War. Over the course of four years, he sank 13 ships and captured another – the most victories by any Austrian submarine commander. These successes earned Georg a knighthood and made him internationally famous, with the New York Times reporting his exploits. (Among other things, the sinkings included a major warship (the French armored cruiser Léon Gambetta), an enemy submarine, and the largest cargo ship in the world.) With Nazi Germany preparing for war, it is small wonder that the Reichsmarine attempted to recruit him as a submarine captain.

At the end of the First World War, however, a different sort of life seemed ahead for Georg. The collapse and defeat of Austria-Hungary in the First World War reduced Austria to a small, landlocked nation with no seaports; Georg was a naval officer whose country no longer had a navy. He retired with his first wife, Agatha, to Zell am See, a picturesque part of Salzburg where the family made its home, living off Agatha’s inheritance.

Agatha died in 1922 of scarlet fever, a treatable disease today but a major killer before the discovery of penicillin. With her death, Georg assumed responsibility for raising the couple’s seven children; four years later, when one of his daughters was bedridden by illness, he approached the Mother Superior of a nearby abbey for a home tutor – a young woman named Maria Augusta Kutschera, who had ended up in the abbey after a strange sequence of events starting with attending a church service that she mistook for a Bach concert. (Truth is stranger than fiction sometimes.) The two married the following year and eventually had three children together.

The family fortune was lost due to a bank failure in 1935 (one of many during the Great Depression), putting the family in dire financial straits. Although they soon rented most of the family home out to boarders, that money was not enough to feed such a large family. Fortunately, one of their short-term renters turned out to be the internationally renown opera singer Lotte Lehmann, who heard the family singing in the garden and suggested that they sing professionally. A radio appearance led to numerous engagements, including command performances for the Austrian Chancellor, Mussolini, and the Pope.

Events began to come to a head in March 1938, when Germany forcibly annexed Austria. Georg, a staunch Austrian patriot, refused to fly the German flag or for his family to sing the German national anthem. Then in a fateful series of events that summer, he was asked to accept a commission in the German navy (the Reichsmarine)…and met Adolf Hitler by accident in a restaurant in Munich. Hitler, a great fan of music, “requested” that the future Trapp Family Singers sing at his birthday. Before either issue could be forced, the von Trapp family quietly packed a few bags and took a train out of the country. By the end of the year, they were performing in Canada and the United States; the family eventually purchased a farm in Vermont, founding and operating the Trapp Family Lodge while continuing to perform internationally – and the rest is history.

In the musical Urinetown, one of the characters opines, “Nothing can kill a show like too much exposition.” In crafting The Sound of Music, the musical’s authors were able to brush past most of the details of Georg von Trapp’s life by a simple virtue: Most of the audience would have known the family’s story already. To theatregoers less familiar with these aspects, though, knowing the background shines a different light on those hills that are alive and how.